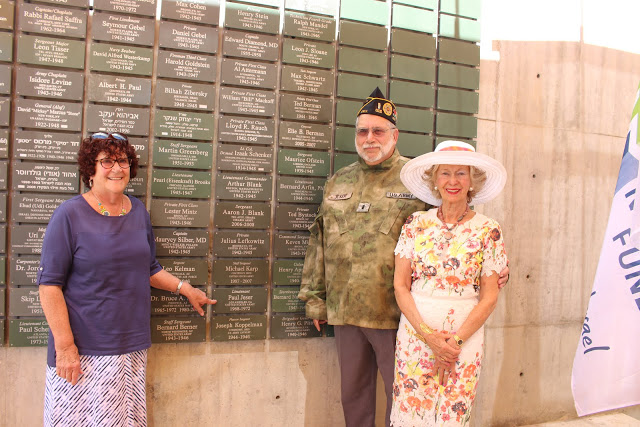 Here, another story of a Jewish military veteran honored at JNF's Wall of Honor at Ammunition Hill in Jerusalem.

Dressed in his U.S. Army jacket, wearing a pin-studded army beret, Paul Jeser approaches the Wall of Honor at Ammunition Hill and takes in the rows of plaques. Each plaque displays a name, an army from around the world, and the years that person served in the army. What makes this wall different from similar monuments is that it is not a memorial wall, it is a wall of honor, and today Jeser and his family and friends have traveled from Los Angeles to unveil the plaque that will honor his service during the Vietnam War.

Born and raised in the Bronx, Jeser was drafted as a graduate student and left his MBA studies behind to heed the call of duty. Although Jeser was not a rabbi, he ran a Jewish chaplaincy program from 1969-1971 in Augsburg, Germany, a complex time and place to be a Jew. On the one hand, he served with many Americans who had never even met a Jew before. On the other, he got to know the large, mostly Eastern European Jewish community of Augsburg. Hearing firsthand testimony from Holocaust survivors at a time when Germany was still hiding from its past left a permanent mark on Jeser and he started to feel a stronger connection not just to his Jewish identity, but to the Jewish world at large.

In 1970, the Jesers visited Dachau, and the powerful feeling of walking out of that crematorium alive changed Paul Jeser forever. The experience made him realize he couldn’t simply return to his studies at the end of his service. His service from 1971-1972 in Vietnam, as an officer at a drug rehabilitation center, for which he was awarded a Bronze Star, only cemented his feeling that his future had to be dedicated to the service of others.

Jeser’s experiences during the Vietnam War taught him that approaching difficult situations with creative solutions was paramount. It allowed him to be a spiritual guide for a Jewish community, and help young men overcome their addictions in the midst of the horrors of the war. Later, these qualities would help him during his seven years of service at Jewish National Fund from 1990-1997 as national director of campaign and regional activities.

He "was always committed to making JNF a more dynamic organization, and that dedication came from his experiences in Germany and Vietnam," Avrham Kalman, a former co-worker turned dear friend said before the plaque was unveiled. "For Jeser, being honored on Ammunition Hill, a JNF-sponsored project, for his service in the U.S. Army is a moving opportunity to tie together two key experiences in his lifetime that have shaped the man he is and the values he carries to today."

Jeser says the plaque serves to reaffirm his love for Israel, which he visits at least once a year, and to honor the work done by JNF. Since his time with JNF, Jeser has continued to work for various Israel-based organizations. He currently is the national director of major gifts and director of the Western region for the American Committee for Shaare Zedek Medical Center in Jerusalem.

Jeser sees the Wall of Honor as the ultimate expression of Jewish values and a celebration of life and service. "This is the Jewish way of looking at things, honoring life. This wall is part of the continuation of past, present and future," he says. When asked what he hopes for the future now that his plaque has taken its place among the names of Jewish heroes, he says, "I am very pleased that JNF took on this project. It’s almost as important as all the infrastructure work that JNF has been doing for the last hundred years and I will do everything to try and get as many people here as possible."

Have a story about a veteran named on JNF's Wall of Honor? Write to us at teddyherzl18 at gmail dot com with "Jewish veteran" in the subject line.
PLANT TREES IN ISRAEL