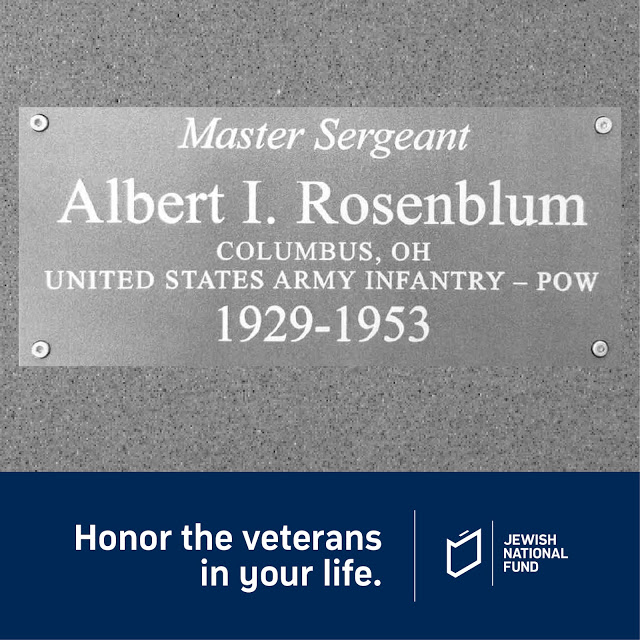 As we did for Veterans Day in 2015, we are marking the day this year by sharing stories behind the names on JNF's Wall of Honor at Ammunition Hill. Plaques on the Jerusalem wall pay tribute to Jewish military veterans worldwide who have served their countries.

Albert I. Rosenblum immigrated to the United States from Russia at age 4. In 1929 he entered the army and was stationed in New York, Honolulu, and Salt Lake City. When he was discharged, Albert opened a grocery and butcher-paper supply business. However, in 1939, as talk in the United States of war grew, Albert decided to go back into the army.
While serving in Tunisia, Albert participated in the Allied invasion of North Africa. He was later severely wounded in the Battle of El Guettar, captured by the Nazis and sent to Prisoner of War Camp 59 near Ascoli Pecenzo, Italy with 253 other Americans. He was in that camp for approximately nine months before he and some other POWs escaped.

After the escape, he and the other POWs joined the Italian partisans and fought the Nazis from behind enemy lines for almost a year, until he was able to reach the Allied lines in July 1944.

Upon his return after these heroic years as a soldier, he was assigned to military police duty and spent two years in Japan and 18 months in Korea before retiring in 1953. Serving a total of 23 years in the army followed by 22 years at the Defense Construction Supply Center, Albert spent the majority of his younger years serving his country.

Albert's son, Alan, a JNF supporter, dedicated a plaque in honor of his father at JNF's Wall of Honor at Ammunition Hill. Alan first learned of the project as a participant in JNF's Sunshine Tour for active adults 55+‎ in June. Alan says his father was very patriotic and felt he owed something to his adopted country for taking him and his parents in when they emigrated from Russia.

Growing up, Alan says, his parents talked about Israel. Albert sadly never made it to Israel, but by honoring him at Ammunition Hill, Alan says he feels he's completing his father's journey. Albert taught his family to work hard, respect others, and honor family, and that no matter what difficulties you encounter, the sun will still rise tomorrow.