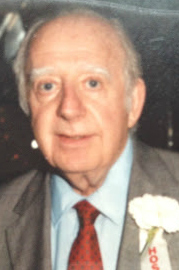 Next up in our series profiling soldiers named on JNF's Wall of Honor at Ammunition Hill, Judy Levin remembers her dad, who left a lasting mark on the Jewish community of Columbus, Ohio, and beyond.

My father's name is Ben M. Mandelkorn. He was born in Paterson, New Jersey, in 1914 to Russian immigrant parents. He worked his way through Rutgers University and the University of North Carolina Graduate School of Social Work.

Upon completing his education, my father enlisted in the U.S. Army during World War II, attaining the rank of captain. He attended the Army Officer Candidate School and commanded a mobile military hospital, a forerunner of the MASH units of today. He was stationed in North Africa, Marseille, and Germany. After the Battle of the Bulge, he went with the generals to liberate the concentration camps. It was then that he decided to devote his life to his fellow Jews.

My father was the driving force in Jewish philanthropy and the architect of so many organizations for the Jewish community both in Columbus and across the nation. He influenced every Jewish agency in Columbus. Because of his persistence, the Columbus Jewish Historical Society became a reality. It was also true of so many other organizations that were in Columbus. He was a mentor to so many volunteers and Jewish communal workers who now reside throughout the country and Israel. My father's greatest joy came from inspiring and developing leadership in others.


When people in Columbus talk about my father, they say there is no one who has left larger footprints in molding the Jewish community infrastructure than Ben M. Mandelkorn. He founded AJCOP (the Association for Jewish Community Organization Professionals), the first professional organization for people who worked in the field of Jewish community organization. My father felt it was so important to develop standards for its professionals and to have an association to discuss issues that were important in changing and improving professional development.

If you visit Columbus today, people still ask, "What would Ben do or say in this situation?"

My father was a man with a vision, a giant in his field, far ahead of his time. He was a man with tremendous passion, energy, conviction, and drive. He worked tirelessly for the Jewish community and Israel. He devoted his life to the premise that each person can make a difference in the lives of those around them. His constant devotion and love of the community and Israel are long remembered by everyone whose lives he touched.

My father was a very modest and humble man. The words that he wrote in the Foundation Tribute Legacy sum him up: "What I have done simply emulates the good deeds of others." Above all else, his greatest joy was to teach leadership skills to others.

My father died in June 1998 and his presence is still deeply missed today.