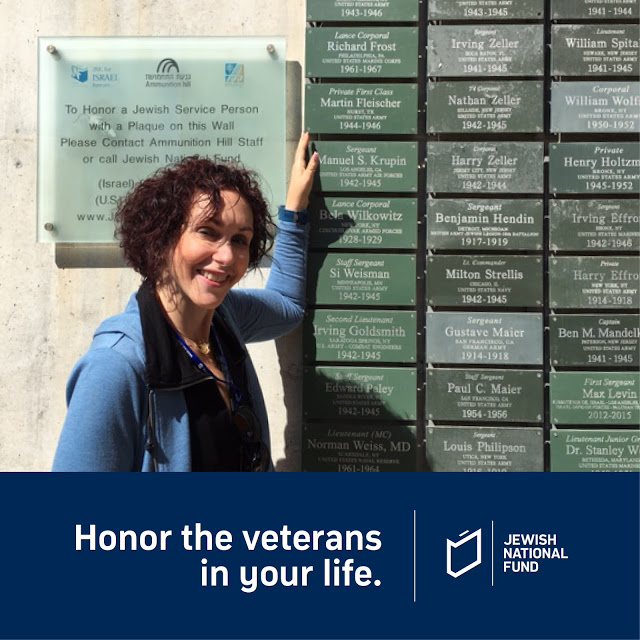 As we did for Veterans Day in 2015, we are marking the day this year by sharing stories behind the names that appear on JNF's Wall of Honor at Ammunition Hill. Plaques on the Jerusalem wall pay tribute to Jewish military veterans worldwide who have served their countries. Here, Myra Chack Fleischer shares her deep connection to her father-in-law, in whose honor she dedicated a plaque.

To talk about my father-in-law, I need to start with my father. My dad was a wonderful man who unfortunately was ill my entire life. He had his first heart attack at age 37 when my oldest brother was six weeks old. My parents bravely went on to have three more children despite my father's continuous heart problems, and I was the fourth born when he was age 44. The odds at that time of him surviving were slim, but he miraculously made it until my first semester in college. He was a funny, wonderful man who could fix anything. The void after he left us was enormous and my mother filled it until I lost her as well 13 years ago.

Ten years and six days after I lost my father, I married my husband Charlie and inherited his wonderful parents, Martin (Marty) and Margery Fleischer.

Marty, is a funny, terrific man. He is a physician and worked as a radiologist until his retirement. I remember the first time I met him he asked me, "Are you fertile?" My reply: "I don’t know, is Charlie?" We have been great friends ever since. He loved that I talked back. He asked all of his future daughters-in-law similar questions and I apparently had the biggest mouth. My poor mother-in-law simply sat down in a chair and said, "Oh Marty!"

Marty is a character. If he goes into a restaurant or other establishment that has T-shirts for sale he can always get them to give him a free one. He can talk and cajole anyone to see it his way and give him things for his "free advertising" for them. He gets stuff all of the time! I love when we visit and phone solicitors call. He can keep these poor people on the phone for hours. It is hysterical to listen to.

He will be 91 next February and his mind is still sharp as a tack. He started taking Spanish lessons a few years ago and takes two different classes and watches TV in Spanish now. He still works out at the gym five or six days a week.

Read stories of other veterans honored on JNF's Wall of Honor

If I could say one thing he has taught me it is to not take yourself too seriously.

Marty was also in the United States Army for four years and served as a private first class. I decided to honor him with a plaque at Ammunition Hill for his 90th birthday, which meant so much to me. I have known him, my husband, my children and just about everyone in my life longer than I knew my own father. It is an emptiness that is hard to explain.

Without making a fuss or noise my in-laws became my greatest champions and, along with my incredible husband, supported me through law school, through the birth of three children (two of whom were born during law school!), through starting and succeeding at building a law firm and through anything else I have set my mind to do. They became my greatest champions just like any parent would. I am so blessed and fortunate to have them in my life.
PLANT TREES IN ISRAEL