Jewish veterans of honor: 'Regular guy from the Bronx' whose unit liberated a concentration camp 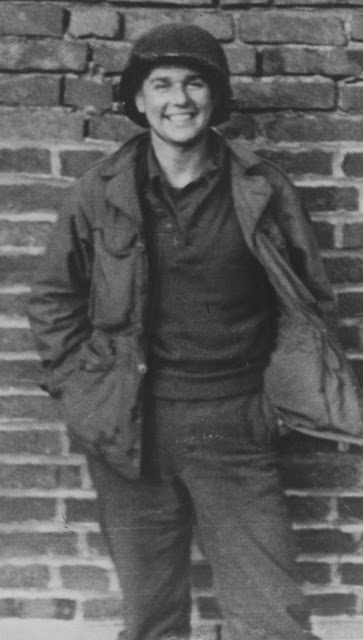 
Next up in our series on soldiers honored at Ammunition Hill in Jerusalem, Estelle Mintz remembers her husband Lester. JNF's Wall of Honor pays tribute to the courage and heroism of Jewish soldiers worldwide who have fought in defense of their countries in numbers disproportionately high considering their representation in the general population.
Lester was a sweet, friendly, funny, and sometimes silly and corny, regular guy from the Bronx. He was drafted into the army when he was only 18 years old and it was the first time he had ever traveled. That army time was the experience of his lifetime. He was eternally fascinated with everything World War II-related.

His unit (the 104th Infantry Division, or Timberwolves) liberated the Nordhausen concentration camp in Germany on April 12, 1945. He almost never spoke of it.
After the war, he went on to become an elementary school teacher, spicing up his fifth-grade history lessons with photos of himself with his buddy, George Washington (taken not during the Revolutionary War, as the kids believed, but at Colonial Williamsburg).
Above all else, he loved to travel, and he visited Israel several times. In 2014, when we visited Israel on our first family trip after his death, being able to dedicate a plaque at Ammunition Hill in his honor helped us to feel as if he was there with us.
Lester’s Jewish background and his experience in the military were two hugely important influences on his life. He would be honored (and tickled) to know that he is in the company of all the brave Jewish soldiers -- famous and not so famous -- whose names are on the Wall of Honor at Ammunition Hill.
The plaque at Ammunition Hill is important to all of us, but especially to our three grandchildren. It is a meaningful memorial to their grandfather and it provides them with a tangible personal connection to Israel.