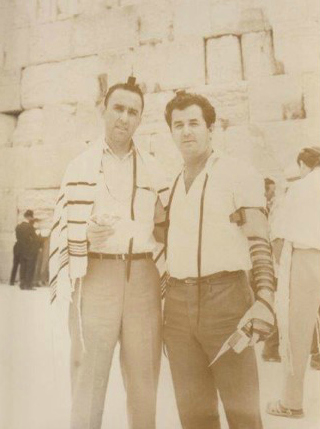 
This is the third story in our series about the soldiers named on JNF's Wall of Honor, which pays tribute to Jewish military veterans worldwide. Today, on Veterans Day, we remember the late Dr. Edward Diamond, a leading American obstetrician and gynecologist with a strong connection to Israel.

Dr. Edward Diamond, who served as a captain in the the U.S. Army and was discharged as a major, entered the army after the Korean War, when compulsory military service was on its way out. Some of his major achievements included perfecting microsurgical techniques in reproductive medicine and developing patented surgical tools and techniques still in use today.

Diamond, who served in the army from 1955-1958, chose to enlist both out of a conviction for serving his country and a desire to improve medical services for the army, particularly ob-gyn care for enlisted women or wives of enlisted men. Having recently finished his ob-gyn residency, he viewed serving as both a challenge and an opportunity to enlarge the scope of his medical experience.

The New Jersey doctor served in Europe, and he traveled extensively. He spent a lot of time in France and Germany, where he made use of his foreign-language skills to communicate with local physicians and model American medical care for countries trying to rebuild their medical systems after a devastating war.
Diamond, who passed away in 2009, had a strong Jewish identity and was extremely tolerant of others. He chose to not to isolate himself on a segregated American military base, and sent his children to Catholic school to experience the world in the same way as the neighbors and children around them. Always involved with Israeli medicine, Diamond attended the first World Human Reproductive conference on IVF in Jerusalem in 1968, and made lifelong connections with the Israeli medical system, one that later proved to be a model of sophistication in the field of reproductive medicine.

"He firmly believed in the Israeli medical system as a beacon of hope, initiative, and innovation to serve both the people of Israel as well as those from less fortunate countries seeking medical help in Israel," said his son Gary Diamond, "especially in helping men and women achieve their reproductive potential and realize their dreams to start families of their own."
Eventually, two Israelis -- Dr. Matan Yemini and Dr. Arie Birkenfeld -- inherited Diamond's practice at the Diamond Institute for Infertility and Menopause, which he founded.