Love Blooms on the Darian B 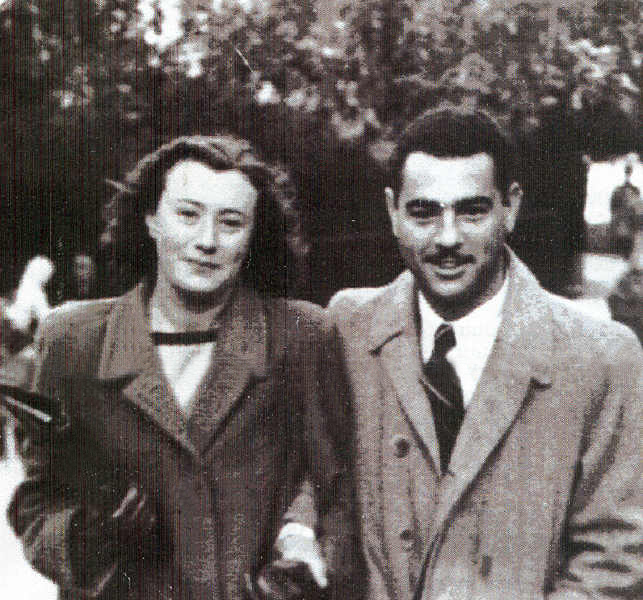 In 1941, 19-year-old Yosef Blumenfeld and his group boarded the Darian B ship in Constanta, Rumania, along with hundreds of others as part of the clandestine immigration that took place in the years prior to Independence. All of them shared one dream - to reach Eretz Yisrael.

A pair of socks, a fiery-tempered redhead, and the passion of youth led to the unfolding of a beautiful love story.

Darian B had initially meant to transport immigrants that were making their way from outside Rumania, but when they didn’t arrive at the port on time, Rumanian Jews were allowed to board instead. And that is how Yosef Blumenfeld and young members of the local Maccabi group found themselves on the way to the Promised Land.

Conditions on board weren’t ideal but Yosef doesn’t recall any immense hunger or suffering.

Cooking for the passengers was done in rotation, and it was a much sought-after job – not because of the actual work done, but for the right given to them to shower using hot water afterward and then use the water to wash their clothes.

Yosef recalls the day that he fell head over heels in love with the pretty Olga.

“That day, her group from Hungary, Shomer Ha’Tzair, was on kitchen duty,” he recalls. “In charge, was a red-head with a million freckles, whose words came out faster than machine gun bullets – and all this in Hungarian. As I was a polite, gentle boy, I turned to the redhead and asked her quietly for a favor – when she used the hot water at her disposal from the kitchen to wash her own clothes, whether she could wash my socks as well.”

“The first atomic bomb wasn’t thrown in Japan,” he remembers. “It was thrown on the Darian B. I felt like I was a sieve from the holes in my body made from the looks she threw my way.  Despite her rusty Rumanian, I understood that my request hadn’t been well-received. To have the audacity to speak to a halutza (pioneer), and even worse, to ask her to wash my socks?! I also understood – after she threw my socks in the sea – that she was willing to help me jump in to save them. Thankfully, there were kind souls around us who helped me get out of the situation alive.”

“As time passed,” he continued, “the storms abated and the situation between us improved. So much so that I ultimately put a ring on her finger.”

The Darian B eventually reached Haifa, where it was stopped by the British naval blockade. Pregnant women and the elderly were first allowed to disembark but the younger passengers were kept waiting for many days on the ship.

But they weren’t overly concerned.

“Remember, we came from a warzone,” he says. “On board, we had food. We had an accordion. We had a guitar. Our morale was high.”

Eventually, Olga and Yosef, along with everyone else on the ship were taken to Atlit Detention Camp, operated by the ruling British.

The men and women were separated in the camp, and the only opportunity for them to meet was on the middle path that separated the two camps, known as The Promenade.

After they were liberated, they settled in the new state of Israel where they built their home and family.

Atlit’s database – a true national treasure - contains over 130,000 names of clandestine immigrants, as well as hundreds of personal interviews. Among them is the testament of Yosef Blumenfeld, where he manages to convey his experience as a young clandestine immigrant with grace and humor.

With the generous support of Jewish National Fund-USA, the Society for Preservation of Israel's Heritage Sites has made it its mission to keep adding to this database as long as there are stories to tell.

Plans are also underway to expand the camp and turn it into one of Israel’s premier tourist destinations. The site will tell the incredible story of the Jewish people’s homecoming by providing a totally new and authentic historical experience. Visitors will be welcomed through a state-of-the-art entrance and exit pavilion that will include facilities such as gift and coffee shops. Plans include a well-curated introductory exhibit hall that will be built in the restored hospital compound and a total overhaul of the site’s look and feel. Our goal is to increase the number of visitors, offer them a way to truly understand and appreciate this crucial chapter in Israel’s history and – along the way - create more jobs opportunities for the entire area.

To donate to Atlit Detention Camp Heritage Site and help turn the Master Plan into a reality, please go to https://www.jnf.org/menu-2/our-work/heritage-site-preservation

This story is published this week just after the Israeli holiday of love, Tu B'Av, was celebrated on August 12.