Once a soldier in Iraq, now a JNF staffer: One man's story 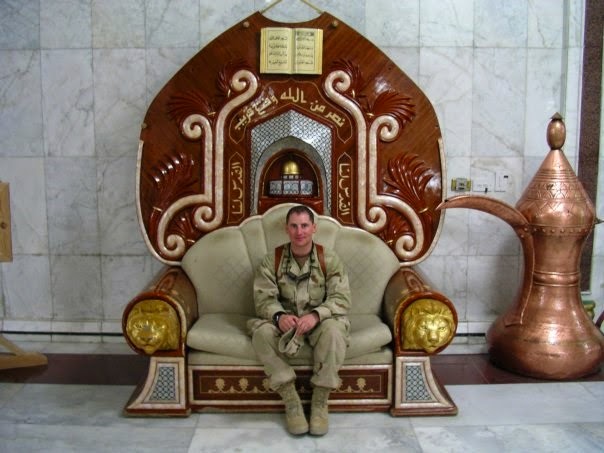 I'm a senior campaign executive with the Jewish National Fund in San Francisco. But this isn't the first time I've worked in the Jewish community. After practicing law for several years, I made a career change in 2006 and accepted a position with the American Israel Public Affairs Committee.
In May of 2007, while working at AIPAC, and with less than two weeks notice, I was recalled to active duty with the United States Navy. I am proud to have served my country in Iraq as a Jewish soldier. I still keep my dog tags, which list my religion as Jewish, next to my bed.
In Iraq, I was appointed officer in charge of the Combined Review and Release Board Liaison Office, which handled detainee operations in the U.S. Embassy. As the OIC, I was personally responsible for all operations, facilities, equipment, security, and personnel in a legal office comprised of military attorneys, military paralegals, and civilian linguists. I lived in a "wet" trailer with a roommate and worked 14 hours per day, seven days a week. During my tenure as OIC, I ensured the efficient review of more than 14,000 security internee files.

Almost on a daily basis, insurgents fired rockets and mortars into the Green Zone. Besides work, my only release was attending Shabbat services at the Embassy chapel, which we unofficially named B’nai Baghdad. Since the base did not have a rabbi, an army major led services.
Usually, 15 people, military and State Department employees, attended services, which lasted approximately 45 minutes. Then we would eat dinner together in the galley. For Rosh Hashanah, an army rabbi from Philadelphia led services in the Green Zone, and more than 50 people joined us, many more than usual. In addition, an Iraqi Jew joined us. It was the first time she was able to practice her religion safely and with other Jews. It was quite an exhilarating experience celebrating Rosh Hashanah in Baghdad, a city of one of the world’s oldest and most historically significant Jewish communities.

On being called up in 2007, I initially reported to combat training at Fort Jackson in Columbia, S.C. There, I lived in an open-bay barracks with 60 other navy personnel, including officers and enlisted members. We began each day at 0445 and finished each day at 1830 after dinner. Every day I wore my desert camouflage uniform, Kevlar helmet, and 60 pounds of body armor, even though it was 90 degrees and humid.
After completing my training at Fort Jackson, I reported to Camp Virginia in Kuwait for more combat training. It was extremely hot in Kuwait, 115-120 degrees during the day. At night, it cooled down to 105 degrees. During the first few days of training, I lived in a tent with nine other people. We then left Camp Virginia for intensive weapons and convoy training at the Udairi range in Northern Kuwait.  During this time, 100 of us slept in a single tent, and we began our training each morning at 0330 and ended each day around 2000.
Finally, after completing my training in Kuwait, I departed for Iraq. We arrived at the Baghdad International Airport on an Air Force C-17, a huge cargo plane. We wore our body armor and Kevlar helmets during the one-hour flight. On our descent into BIAP the Air Force pilots conducted a "death spiral" so possible insurgents could not shoot our plane.
The following morning, a friend of mine, who is also Jewish, took me on a tour of Camp Victory, located near Baghdad International Airport. During the tour, he took a picture of me sitting in a throne in one of Saddam Hussein’s former palaces. Later, I asked him the significance of the throne, and he told me that it had been a gift to Saddam Hussein from Yasser Arafat.
Later that day, I took a convoy from Camp Victory to the Green Zone, a 7.5-mile ride in a Rhino Runner, a type of armored bus used extensively in Iraq, on Route Irish, the "world's most dangerous road." After arriving in the Green Zone, my colleagues informed me that earlier in the day, more than two dozen mortar shells pounded the Green Zone killing three people, including an Army nurse, and injuring 18.

In May 2014, after working at AIPAC for seven years, I accepted a position with the Jewish National Fund. I am proud to work for JNF. Serving in Iraq gave me a greater respect and understanding for how the people of the State of Israel live on a daily basis. For example, last summer, during Operation Protective Edge, Hamas fired more than 4,500 rockets into Israel. During the conflict, 66 Israeli soldiers and Israeli civilians were killed. Nearly one million Israelis lived in bomb shelters, and more than 8,000 Israeli citizens fled their homes due to the threat of rocket and mortar attacks.
I, fortunately, have survived several rocket and mortar attacks, but I will never forget the sound of the warning sirens: INCOMING, INCOMING.