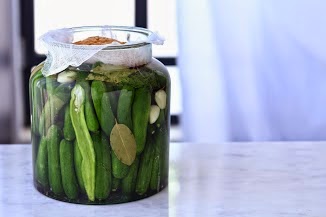 Michal Ansky, a well-known Israeli media personality and foodie, believes that "everyone brings their memories and defines themselves by the foods they eat." Here, she shares with us her grandmother's pickle recipe, a Passover favorite.


For a large jar

1.  Rinse the cucumbers and remove any remaining barbs.

2.  Spread the garlic and the hot chili pepper in the bottom of a tall jar and pack the jar with the cucumbers and the dill. Add the bay leaves and the peppercorns.

3.  Boil water with salt -- about one heaping teaspoon per cup of water. After the water comes to a boil, lower the flame. Wait 2–3 minutes; then pour the hot, salty water over the cucumbers. Add the vinegar. Lay the gauze over the cucumbers, and place the not-particularly-fresh heel of bread on top of the gauze. Close the top, but not hermetically.

4.  Set the jar in a sunny place, on a windowsill. Two or three days later, when the cucumbers and the pickling water change to a khaki color, they are ready to eat.

*Very important: Do not insert your fingers in the jar. Remove the pickles with a fork or tongs.

This recipe originally appeared in our B'yachad magazine.
PLANT TREES IN ISRAEL