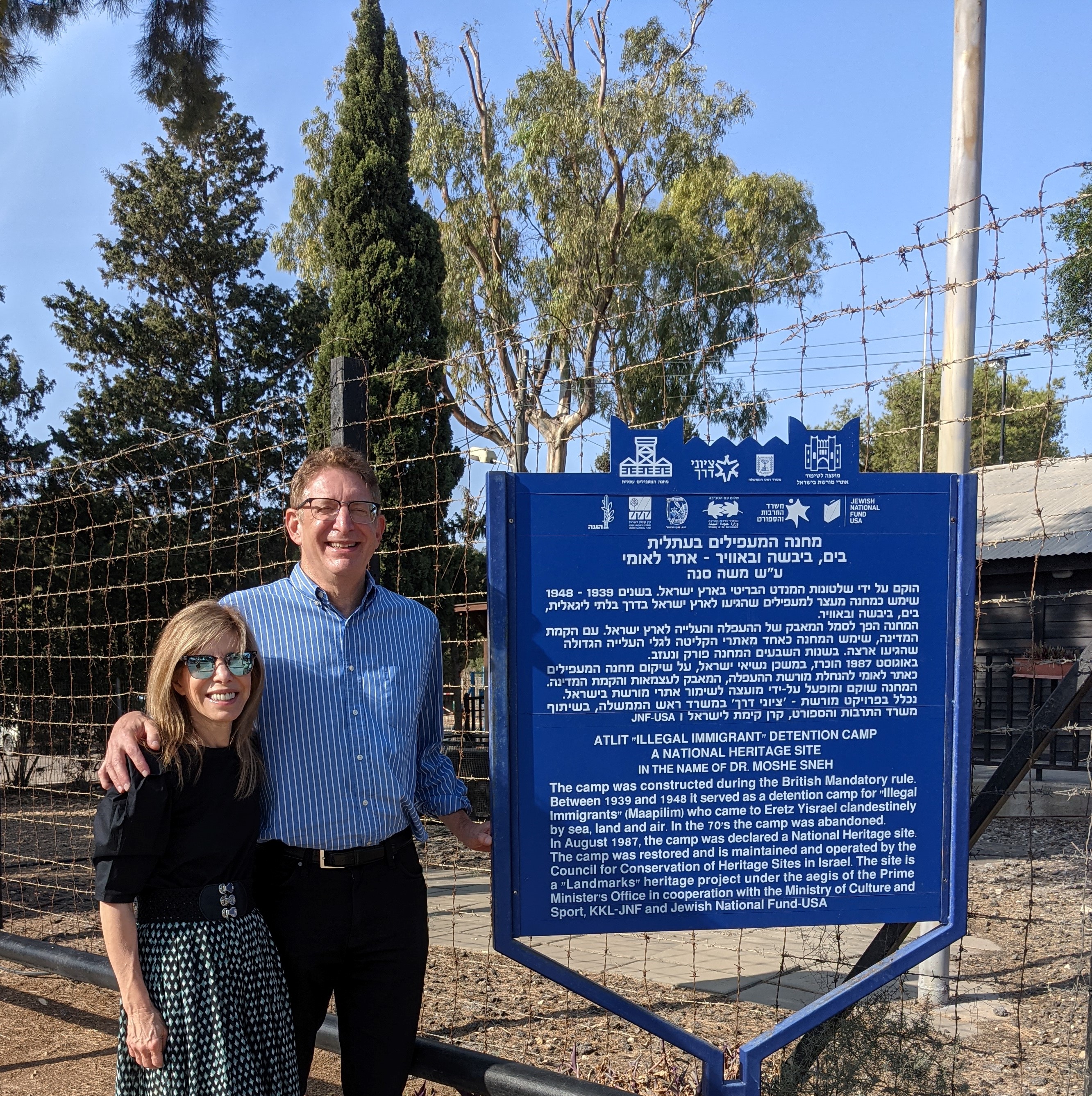 No matter how many times we've been to Israel and how much we've seen there, I'm always amazed at how much more Israel there is to see, small and large, of yesterday and of today.

With Atlit beckoning for the afternoon, we (my husband and daughter, who lives in Tel Aviv) first spent the morning at Alexander Muss High School in Israel, where I wanted to visit the campus and meet the leadership. If I had a positive impression of this remarkable institution before, seeing AMHSI firsthand exceeded expectations. What a happy and cheerful campus for students to spend a semester studying in Israel. What a staff committed to educational excellence and the Israel experience. And what plans for the future, with a second campus on the horizon in Be’er Sheva. So glad to have added this stop.

Then, on to Atlit to visit the site of a sprawling British internment camp where post-Holocaust refugees trying to escape to what was then Palestine were incarcerated after being intercepted and detained due to severe limitations on the number of Jews permitted to enter the country. It's a sad chapter in Israel’s history, yes, but let me share a wonderful, surprising story that occurred during our visit to the detention center, which is now a museum.

We learned about the refugees' arrival (by land, sea, and air) and the time spent there (working, cooking, and mentally detoxing) and waiting for their new lives (days, weeks, months for some). We literally walked onto a ship and into a plane that have been refurbished with exhibits, videos and audio commentary with the help of Jewish National Fund-USA so visitors can relive the refugee arrival experience.

Despite the travails of their journeys to escape, and being denied entry, this is not what echoes most prominently in the memories of these refugees, whose many testimonies have been gathered in video and audio in a database Atlit curators have created and maintain to keep these experiences alive. It is the experience in one modest building. Our tour guide noted, as we stood in this drab elongated barracks-style building with showers and water tanks, that of all the places at Atlit, and of all the varied experiences these refugees had at the camp, most memorable was their arrival and being forced to shower in this building before they could be assigned a bed. Having seen the showers at concentration camps, it wasn’t hard to imagine the fear and trepidation that lingered.

One of the most amazing and serendipitous aspects of our Atlit visit, beyond seeing the camp itself, its impressive new museum building and exhibit and the investment JNF-USA has made in preserving an important chapter in Israel's history (the plane and boat, which, sadly I didn't think to photograph), was with our driver, Doron, who was born and raised in Israel. It turns out that while Doron knew about the camp, he had not been to Atlit, despite the fact that his father was detained there as a 14-year-old Greek trying to make it to Israel after the Holocaust.

Like many kids, Doron said he half-listened to his father's Holocaust-related stories. Sadly, his father died a few years ago, and with him, the stories -- or so it seemed. Unbeknownst to Doron, his father made a video testimony at Atlit, joining the testimonies of many others who have recounted their experiences there and are part of the Atlit database. Our tour guide was able to share the link to his father's testimony, which Doron had never known existed. Within minutes, there was Doron’s father’s video testimony now on his son's phone speaking to all of us. Doron, with tears in his eyes, phoned his mother to share the experience.

Atlit was powerful, but more so because we shared this personal connection. When I think of JNF-USA's work, I think of building new sites, but less well known are the preservation and heritage site initiatives and how important they are not just to history, but to today. And then, I think about how much more Israel there is to see.