The Bullet Factory: Always something new 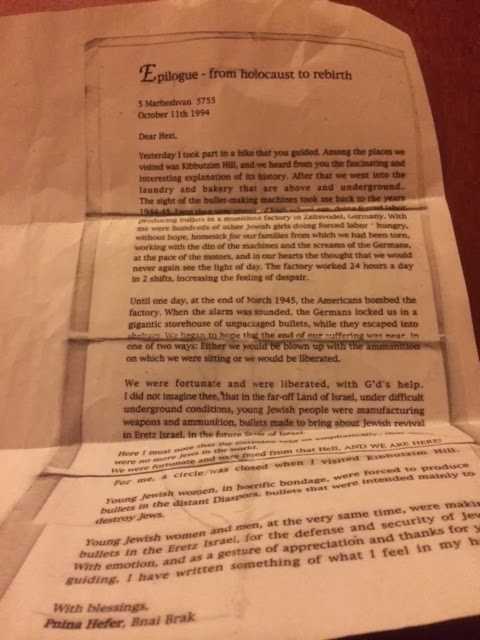 The Ayalon Institute is a museum dedicated to preserving the history of a secret bullet factory, set up by the Haganah, and built right under the nose of the British. The factory was built to look like a Kibbutz laundry. Volunteers led a double life, telling everyone they knew that they were going to work in the laundry but really working tirelessly underground manufacturing ammunition.

On Thursday, I had the opportunity to visit my favorite tourist attraction in all of Israel, The Ayalon Institute, also known as the Bullet Factory. I accompanied the wife of an American Executive. As our guide fascinated us with the personal stories of the workers from the Factory, our guest shared stories of her father fighting at Normandy during World War II. She saw that we all had to sacrifice and fight together for freedom. It was touching to see how moved she was by this experience.
Some might say that returning to this site is the same old, same old; however, it has never been the same. I always learn something new. This time, our guide told us of a Holocaust survivor who came to see the Bullet Factory. During the war, she endured torture when forced to make bullets for the very enemy that was trying to annihilate her and her people. In coming to this place, she saw that at the same time, Jews were doing the very same thing, but for their own defense. In the words of this survivor, her life had come full circle and was given the closure that she has always sought. Her thought and feelings have been memorialized in the letter that is below.
PLANT TREES IN ISRAEL