The Double Life of Yehudit Ayalon 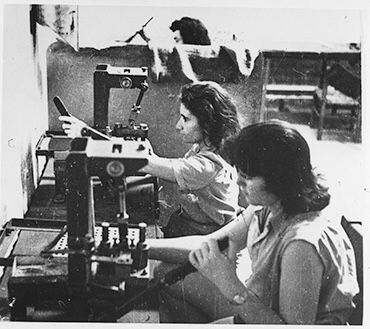 Yehudit Ayalon, was a brave and extraordinary woman who participated in a secret mission that played an important role in the 1948 War of Independence.

Forty-five young adults, members of Scouts Zofim Aleph, were brave heroes who risked their lives every day between the years 1946-1948. They lived a "double life" – they worked in the underground ammunition plant at the Ayalon Institute in Rehovot producing 2.5 million bullets while living a pastoral life in the above ground kibbutz, Kibbutzim Hill.

Yehudit Ayalon was one them.

Yehudit (nee Kramer) Ayalon was born on November 29, 1924 in Riga, Latvia and was raised in a Zionist family . They managed to leave Europe just in time in 1936 and arrive to pre-state Israel, under British rule.

Despite the constant danger of being caught by the British, who then ruled in pre-state Israel, and the daily handling of gunpowder in a closed area that could cause a fatal explosion, these courageous, modest young people changed the course of history.

Yehudit recalled, "We were not afraid. We were young and being together created an amazing atmosphere of social consolidation – everyone looked out for everyone. You were not alone and we understood the importance of our secret mission. We were Zionists, singing and working in this closed space knowing that it was a very dangerous situation.

Without our bullets, who knows if we would have won the war."

On September 25th, 1949, the Scouts Zofim Aleph, with 154 members and 44 children, moved north, between Carmel hills and the sea, and established Kibbutz Ma'agan Michael.

As one of Israel's most important historical sites, Jewish National Fund and its partner, Society of Israel Heritage Sites (SPIHS), are dedicated to upgrading the Ayalon Institute and enhancing the visitor experience.

May is Women's Month at Jewish National Fund-USA. To donate in honor of our strong female role models, visit jnf.org/womensmonth. Every gift made in the month of May will be matched, up to $1 million, thanks to the generosity of T Lungwitz.