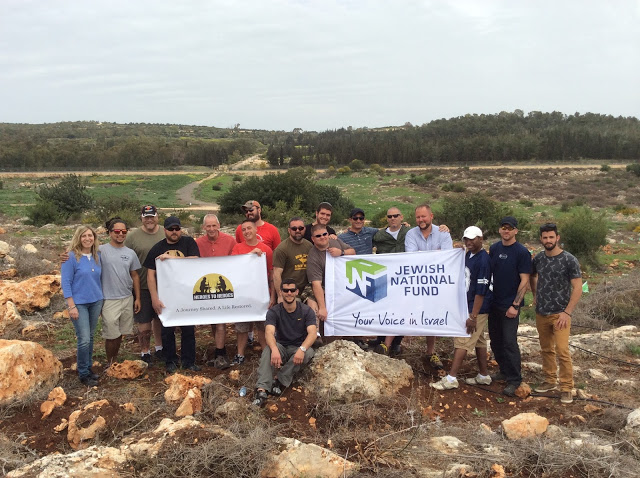 In honor of Memorial Day, we share a post from our friends at Heroes to Heroes, an amazing organization that provides spiritual healing, suicide prevention, and peer support for veterans who suffer from moral injury and PTSD. Recently, a group of these veterans traveled to Israel with Jewish National Fund.
Twenty-two American veterans take their own lives in the United States each day, statistics show. We lose more soldiers at home than we do on the battlefield. Veterans' medical care has challenges, and our veterans are feeling more isolated than ever. Israel too is more isolated by the day. Its people feel that isolation on a daily basis. Making connections between Israel and "everyday people" around the world is crucial to Israel’s survival. Making connections between our veterans and others who care is crucial to our veterans' survival. Heroes to Heroes exists to make that healing connection. Our partnership with JNF helps fulfill our mission.

Heroes to Heroes provides 10-day spiritual healing and peer support journeys to Israel for American veterans who have attempted to take their own lives or are on the path to do so. The Americans are joined by a group of their Israeli counterparts who travel with them for the ten day experience.

Planting trees may seem corny to most people. For Heroes to Heroes participants it can be lifesaving. Steven, 26, had been forced to kill a 10-year-old Iraqi boy to save his life and the lives of the soldiers in his unit. Steven couldn’t sleep without a "visit" from that child. With Steven’s western (human) sensibilities, he was unable to live with what he'd done -- or speak about it. He attempted to take his own life four times prior to his Heroes to Heroes journey to Israel.

After visiting Yad Vashem’s children’s memorial, Steven opened up to the Heroes to Heroes team. He was able to share the story of the boy for the first time, yet it wasn’t until he planted a tree in the boy’s memory that he found a way to live with what he was forced to do. The act of planting that tree, of physically memorializing that child, helped Steven move forward for the first time. He opened up, smiled, and became the life of the team. Steven is now back in school, working, and leading a productive life. He still struggles but most importantly, has chosen life.