'The lives of these kids will live on': Boy's touching tribute to children of the Holocaust 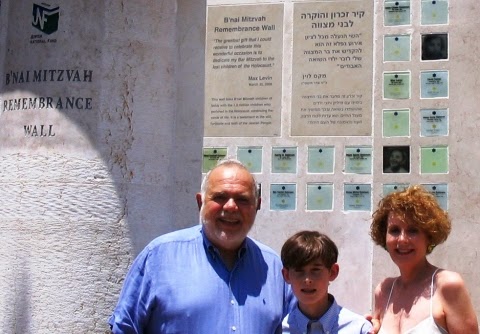 When 12-year-old Max Levin was looking for a meaningful way to celebrate his upcoming bar mitzvah, he decided on a project in Israel that did more than simply mark his "coming of age" ceremony. His decision in 2006 created a unique link between today's teens and their peers who died in the Holocaust before ever reaching that special milestone.

“I used to come to Israel every year with my parents, partly because of my dad’s work, but mostly because our family is very Zionistic," said Max, today 22 and a paratrooper and officer in the Israel Defense Forces. His father, Bud Levin, is Jewish National Fund vice president, Negev and Galil and oversees organizational efforts in the southern and northern regions of Israel.

“That year, we came searching for a bar mitzvah project and considered many options. Eventually we looked at the Golden Books of Honor that JNF keeps at its offices in Jerusalem,” Levin said, recalling the volumes that over the years have documented donations to the organization and that by now contain more than 200,000 inscriptions.

The "Golden Books" comprise the largest registry of names in the history of Zionism and bear testimony to communities since destroyed, to active Zionists, and to Jewish families.

"One of these books contained the names of young people who, during the Holocaust, donated money in honor of their bar mitzvahs. When I asked my dad what happened to them, he told me they all died and that there’s nobody left to remember them. I was very moved and decided that for my project I would make sure that they were remembered,” said Levin, a Los Angeles native who made aliyah in 2012. 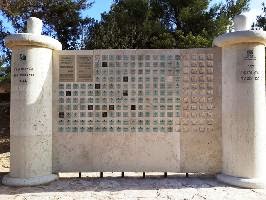 To do this, he created the B'nai Mitzvah Remembrance Wall in American Independence Park, located in the verdant Jerusalem hills near Beit Shemesh.

The wall is shaped like a Torah scroll and glass tiles representing donations to JNF are mounted on it, each inscribed with the individual name, hometown, and bar- or bat-mitzvah date of a modern-day honoree, as well as the name and home country of a "twin" from the Golden Book.

Levin’s was the first tile, and he was twinned with Pinchas Cohen of Germany.

"I had two goals in creating the wall," Levin said. "First, I wanted to remember Pinchas and to somehow continue the life that was taken from him. Second, I wanted kids looking for bar- or bat-mitzvah projects to do the same with other young Holocaust victims and in that way establish a link between them and those who perished."

Since then, more than 150 boys and girls have followed Levin’s lead and commemorated their special day with teens and pre-teens whose names are inscribed in the Golden Book.

For those who wish, JNF honors them and their donation with a ceremony at the Wall of Remembrance. One held recently feted four young American cousins, who gathered there with their parents, grandparents, and members of their extended families.

"My tile is going to be here forever and I can come back years from now and show it to my children," said Katie Kort of Phoenix, whose father, Ted, is a former JNF Arizona Region director. Katie’s brother, Ben, added that "this gift is meaningful to me because it comes from my grandparents and because they gave it to me during my first time in Israel."

Levin attributes his appreciation of remembrance to his family. "My grandfather died when I was 6, and on his yahrtzeit every year we light a candle and speak about him. I always felt it was an important and moving way to keep his memory alive."

That’s why, when he first learned about the young Holocaust victims, Levin’s reaction was almost innate. "I thought it wasn’t right that there was no one left to remember them," he said. And with his grandfather in mind, he created a way to do just that.

"Through the Wall of Remembrance, the names and lives of these kids will live on," Levin said. "This is something I did for Pinchas, and now people are doing it for others. The wall is my contribution to Jewish continuity, and anyone who cares to join me in this commitment is welcome to."