When it comes to anti-Semitism, never again is now 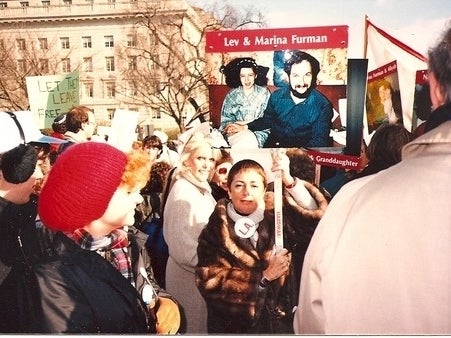 As Jews, many of us have experience with anti-Semitism. In seventh grade at Haven Middle School in Evanston, Illinois, when we were studying World War II, some of my peers asked me, “Was it hot on the train?” It took me awhile to figure out what "train" they were speaking of: the train to Auschwitz. This reference was horrifying, and it happened in a liberal college town in the late 1970s.

In listening to Marina Furman being interviewed on JNF’s IsraelCast podcast, I realized the anti-Semitism I experienced (which stays with me to this day, 40 years later) was almost inconsequential compared with the systemic anti-Semitism Marina experienced growing up in Ukraine. Her family’s story, as told in her own words on the IsraelCast episode, was wrenching. To be outcast, ostracized, and denied opportunities merely because they were Jewish was excruciating to witness, even anecdotally. Vicious middle school students are awful, but an entire community full of hate? Impossible.

Yet Marina not only survived, she thrived. Her story motivates so many of us in the Jewish National Fund family. Her resilience in converting such a negative experience into one of impact and inspiration on our family in Israel is magnificent. Listening to Marina tell her story, I relived my own anti-Semitism story again, but then was reminded of my own impact at JNF.

According to the ADL, the number of anti-Semitic incidents in the country reached a record high in 2019. In these times, it's critical we remember our resilience, celebrate our history, and take inspiration from refuseniks like Marina. We need to stay vigilant in our protection of our Jewish family, in the US, in Israel and worldwide. Listening to Marina on IsraelCast, my resolve is stronger than ever, as is my commitment to keeping our homeland safe, strong, and sustainable.