A legend and his son's legacy 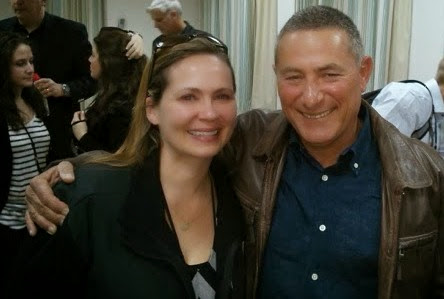 General Almog was the first person on the ground in Entebbe in 1976 -- part of a clandestine mission to rescue 108 hostages whose plane had been hijacked and who were being help captive in Uganda. He was the commander of that mission and is a celebrated hero in Israel. He felt led by his deeply rooted commitment to never leaving a wounded soldier in the field. Several years earlier, during the Yom Kippur war, Doron's brother was left bleeding on the battlefield for days. He was returned to his family already dead. The hostages were to him the wounded soldiers. He would not leave then behind.
When Eran was born, he felt the same. He and his wife knew that they would never leave him behind. Their commitment was to give him a beautiful life, to make sure that he could experience everything to the fullest in a way that matched his needs and abilities. He and his wife recognized right away that there was a stigma. That the other parents would proudly brag about their children. "Of course they thought their children were great!" Doron said, because they belonged to their parents! Their children were considered an extension of their parent's own greatness. There is ego in the pride.

But what do the parents of a severely developmentally disabled child have to brag about? Eran could not feed himself, or go to the bathroom by himself, or even say one word -- "not even aba (father)". But the love a parent feels for their child is unconditional. Those things should not matter. "These children are the most innocent in society -- full of love. They cannot be left behind." Doron set about building a village that would accommodate special-needs young people and adults -- not a sterile institution but a community with green grass, shaded areas to relax, a multitude of special therapies (pet therapy, equine therapy, art therapy, music therapy, hydrotherapy). The place is called Aleh Negev -- a place that they believed Eran would live out the many years of his life.  But that dream would never be realized.  Eran died suddenly and unexpectedly as a young man. People talk about Doron's son who was developmentally disabled a lot at JNF, but they nearly never speak about the fact that he's been left grieving -- a bereaved parent to a special-needs child.


"To rescue 108 people who were he captive for several days -- what is that?" he said. "My life's work is to help those who are prisoners in their own bodies every day of the lives."
When I first met them, I remember driving around with Doron's wife and telling her how wonderful I thought it was that she was raising money for this important village. She set me straight, telling me, " I hate that we are traveling all over the world raising money for a village my son won't ever live in." At the time, I could only see the good that there were doing. I stupidly figured they'd made sense of the loss when they were actually writhing in pain.

We met Doron on Thursday in Aleh Negev. We heard him speak. We visited the pool, where residents were loudly playing with gigantic smiles on their faces. We visited the wind chime garden and the petting zoo and the playground built for children of all needs. I had some time to visit with Doron on my own and we spoke together about the unfairness of life -- how unbelievable it is that a parent could be left longing for their child.  I asked him how he could even stand being in the swimming pool area, Eran's favorite activity -- the one that the two of them enjoyed most together. It seems to actually be something he enjoys doing, visiting that place that Eran would have loved.

There are certain people in life whose strength are an inspiration for the rest of us -- Doron and Didi are two of those people. Their struggle, their pain, their triumphs, joys, and accomplishments are unique and inspiring.  I am beyond honored to call them my friends. I feel beyond grateful to have been able to spend some time with him, here in Israel, in the village that is his son's legacy.
PLANT TREES IN ISRAEL