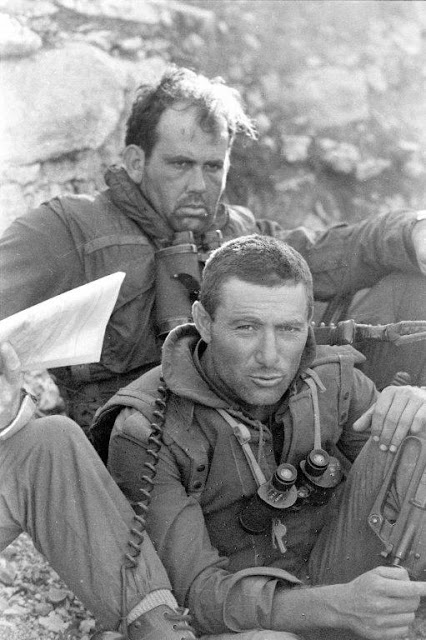 On the eve of Operation Entebbe's 40th anniversary, we talk to two of the heroes from the raid who today are affiliated with JNF projects.

Monday marks 40 years since Israel's successful hostage-rescue mission at Entebbe airport in Uganda. But Maj. General (Res.) Doron Almog's memories of Operation Yonatan remain vivid -- from the role a piece of chewing gum played in the bold undertaking to the pain of witnessing his friend Yoni Netanyahu, the hero after whom the operation is named, die.

Almog recalls sitting on the plane en route from Ben Gurion Airport to save the hostages alongside his subordinates; the IDF special unit forces he was commander of; and a Mercedes limousine that had been sprayed black to look like the one former Ugandan dictator, Idi Amin, traveled in.

The plan was to fake the volatile Ugandan despot's return to Entebbe from a diplomatic trip in order to infiltrate the terminals and free the 106 people being held there. But there was one problem: The airborne limo was leaking gas.
"So we blocked the hole with chewing gum," Almog says simply.
Almog describes the July 4, 1976 hostage-rescue mission as a "one-of-a-kind military operation."

"But it also showed the commitment, the determination, and the dedication that the State of Israel has for any Jew, anywhere in the world, whose life is in danger," he says. "This is what has characterized the Jewish people all through its history, that we are all responsible for one another."
Almog took that lesson from Entebbe and turned it into his lifelong calling. Partnering with the Jewish National Fund, in 2003 Almog established Aleh-Negev Nahalat-Eran, a sprawling rehabilitative village for mentally and physically disabled adults.


Home to 220 residents and providing services to 12,000 outpatients annually, the 25-acre village empowers people with severe disabilities who may have otherwise spent their lives confined in cold and unloving institutions or hospitals to interact with the outside world and live lives of dignity.
Almog calls Aleh-Negev a social Entebbe.

"The severely disabled, the elderly, the weakest members of our society -- they are also the hostages of our society," he says. "Entebbe is a moral imperative for the Jewish people, an example for how to fulfill our social duties not just our military duties."

Almog fathered his own "hostage of society," Eran, who was born brain damaged. Shortly after Aleh-Negev Nahalat-Eran was founded, his son passed away at the age of 23.
"He wore diapers, he never once said the word 'abba' and yet he was the greatest professor of my life," Almog says.

In April of this year, Almog was awarded the prestigious Israel Prize in recognition of his contributions to society. The prize, Almog says, belongs to Eran for giving him the chance to change the lives of society's weakest for the better.

Sorin Hershko was another hero of the Entebbe operation. Severely wounded in the operation, Hershko was left 100 percent paralyzed and now uses a wheelchair. Yet Hershko never gave up.

Lessons from Entebbe to the world
In Hershko’s view, Entebbe taught the world the same lesson to never give up in the face of evil.
“We gave a model example to the world that you can fight terrorism and beat it and you don't need to surrender," he says, adding that the daring operation completely changed the way the way the world viewed the tiny Jewish state.

But even though Hershko maintains that the IDF is a far better army today than it was in 1976, he is doubtful a similar operation would ever be successful today.
"We had the element of surprise that is missing from today's world," he says. "No one expected us to get there. The terrorists in Entebbe thought they were in a hotel, that nothing could touch them."

Memories of Yoni Netanyahu
En route to Entebbe, Hershko settled down before the action to catch some sleep, using the roof of the Mercedes as a makeshift bed. He remembers leaning over and seeing the operation's commander, Yoni Netanyahu, looking jarringly relaxed while perusing an English-language book.

"I was stunned by his sense of calm. I couldn't believe he could just sit back and read a book while the atmosphere was so tense," he recalls. "He was an impressive and extraordinary personality."

Like Almog, Hershko injected his experiences from Entebbe into his life's purpose. In the mid-1990s, Hershko joined the team that founded LOTEM, a nonprofit that makes nature accessible for 30,000 Israeli adults and children with physical and mental disabilities.

"I wanted to give a better quality of life to children in the same situation as me," Hershko says. "So many of them can’t do something simple like go out and get to know nature."
When asked if he has any message for the world, LOTEM's chairman is modestly dismissive.

"I don't feel big enough to give messages to the world or even to Israel," he says."I can't tell other people how to live their lives. I can only say that in retrospect I think I chose the best way for me to get over my own challenges. Today, I am very proud of the choices I made and I have tremendous satisfaction from what I do."
PLANT TREES IN ISRAEL