Happy days for boy with autism: How horses are changing my son's life 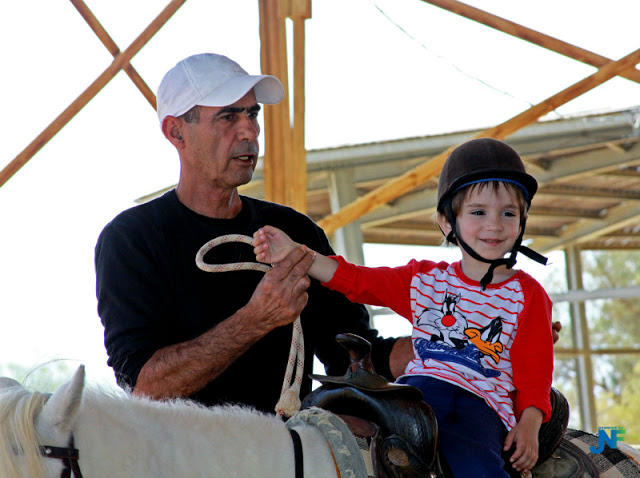 At Red Mountain Therapeutic Riding Center on Israel's Kibbutz Grofit, children with special needs ride horses to improve their coordination and behavioral and social skills. Sometimes this therapy has a dramatic impact, as evidenced by this letter from the mom of a child in the JNF-supported program. "Words alone could never express how grateful we are, which is why I have tried to share with you our experience so that you can perhaps see where your money goes and how wisely you have given," she says.
My son, Isaac, is autistic. He was diagnosed in August of last year, and as a result, on September 1, he started to attend a special-needs gan (kindergarten). As part of his curriculum, he and his fellow classmates are taken to Kibbutz Grofit once a week for a morning of therapeutic horseback riding.
Until recently, Isaac was not keen on animals. Animals are unpredictable, they scare him and they confuse him. In the best-case scenario, he would shut his eyes and shake his head vigorously until the animal was taken away. I was not optimistic about him enjoying the whole horseback riding experience. Not optimistic at all.
Every Tuesday, off they went to the kibbutz, and the staff would relay back pictures of the day. There he was, my son, ON A HORSE!!! We were speechless! Not only was he sitting on a horse with a riding hat (another unfavorite thing of his). He was SMILING!

We quickly saw lots of changes in Isaac. His speech suddenly came on in leaps and bounds, he was more energetic, more confident, and so much happier.
It was plain to see by his face that Tuesdays were his happy days. Every Tuesday when we pick him up, his little face is beaming and the first thing he yells is, "I've been on a horse!" For the past month or so we get told every Monday evening, "Today is Monday so tomorrow is Tuesday and on Tuesday I get to ride on a horse!" This is said with so much excitement, and it only grows by the week. He knows the names of all the horses. His favorite is called Negev, with Pilpel a close second. Isaac jabbers away excitedly about them.
Tuesday is not only Isaac's favorite day of the week, Tuesday is also my favorite day of the week. On Tuesday mornings, I do not have to try and coax Isaac to go through his usual rituals of getting ready to get to the bus. Tuesday mornings are so easy. Because of Isaac's happiness, simple tasks that any other day can take an excruciatingly long time -- getting breakfast, getting dressed, and getting out the door -- are done within the blink of an eye. I know too that Tuesday evenings will be easy.
There won't be a meltdown at shower time because a sock accidentally came off with his trousers because Isaac is too busy telling me about his happy horse day to even notice what is usually such a terrible thing. On Tuesday evenings, Isaac's three big sisters also get to say goodnight to Isaac as he wants to share his experiences with them too so that everyone can be part of the happy Tuesday.
Isaac is no longer skittish around animals. He is cautious, but he is very curious and strokes dogs instead of running away crying. He chases cats instead of freezing up rigid on the spot. And he is increasingly happy, which is just an amazing gift.