In Israel, one word from the dad of an IDF soldier with a disability makes it all worthwhile 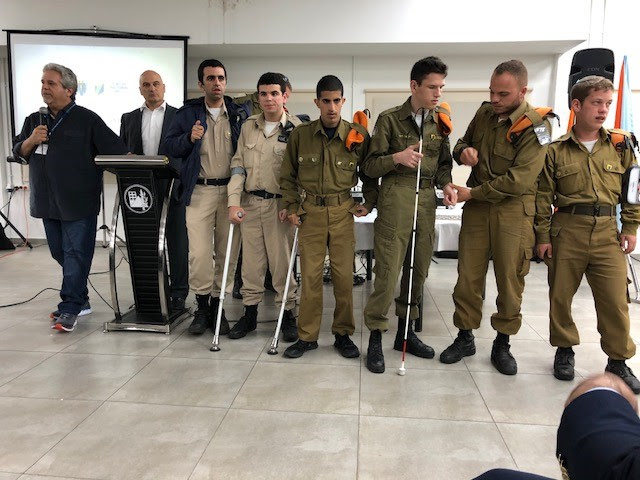 Roni and I just returned from our third trip to Israel and as usual, the experience was terrific. We enjoyed the hustle and bustle of Tel Aviv, the spirituality of Jerusalem, the breathtaking hilltop views in Haifa and the artistic communities in the Golan. And we loved the food wherever we went. You can't beat the chocolate babka from Israel. The rest of our trip was spent deep diving into Jewish National Fund programs near and dear to our hearts.

Having been involved with JNF’s Task Force on Disabilities and now chairing the committee for Special in Uniform (one of four JNF programs supporting special needs populations in Israel), we were invited to visit two Special in Uniform (SIU) units in Tel Aviv. Special in Uniform is a unique program, operating in partnership with Jewish National Fund, that integrates young adults with autism and other mental and physical disabilities into the IDF and, in turn, into Israeli society. Its core belief is that everyone belongs and has the right to reach his or her full potential. The program focuses on the unique talents of each individual participant to help find a job within the IDF that is a perfect fit for their abilities (not their disabilities) and provides support, therapy and counseling throughout the participant’s time in the program. 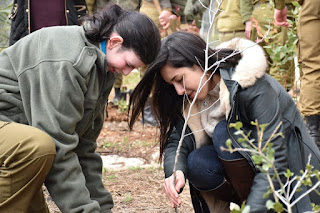 Tiran Attia, director of SIU, gained security clearance for us to visit the SIU unit at Tel Nof Air Air Force Base. Here we were, surrounded by these immense helicopters and fighter jets, feeling the full power of the IDF. But it was the humble captain and the SIU soldiers who greeted us inside a conference room with a heartfelt message and a surprise that moved us the most. We were shown to a plaque on the wall dedicating this SIU unit in memory of my brother. I felt a rush of emotions. I couldn't help my brother Phillip when he was alive, but maybe in some small way, I could help these courageous young people. After pictures and a quiet talk with the captain, we moved on to the workplace of the SIU unit to see these soldiers with disabilities working alongside "typical" soldiers and commanders.
One of the SIU soldiers was Yakov, a young man with Down syndrome. The story of Yakov is a story of perseverance. Yakov grew up on a kibbutz and when he was 18 years old, he approached an officer in the enlistment office, explaining his devotion to the IDF and the Jewish state. He was immediately told his condition would prevent him from serving in the Army. But Yakov didn’t give up. "In the kibbutz everyone goes to the army. These are the values of my family. It’s something that’s been with me since childhood." Special in Uniform believed in Yakov and he is now in charge of taking bulk minor parts, breaking them down and shipping them to the other air force bases throughout Israel. He is proud of his role and happy to be a part of the IDF.
That day, as we wandered from department to department, we saw these SIU soldiers take their work seriously and do it all with a sense of pride. Sometimes the most brilliant ideas are the simplest in concept. Just give these young adults the opportunity and they'll give you everything they have. We saw it with our own eyes.  The “special” part of this program for me is that we take these young adults who may have been destined to be “left behind” and we bring them forward to be a full fledged part of Israeli society. This was not possible 70 years ago when my brother was born; no such program, no such opportunity, no such vision existed. “Special in Uniform” gives the young adults, their siblings and their parents incredible reason to HOPE and helps deliver on the hope!
The next morning, we visited another air force base where we attended an initial introduction ceremony for a new “Special” unit of Autism spectrum teenagers. We watched these young adults with challenges bravely march into the room and face a room packed with military personnel, family, friends, instructors and JNF lay leaders. We were all rooting for them to succeed! We knew this was a pivotal moment for the young adults and their families. Then, we turned to look at the faces of the parents. They wore broad smiles and tears of joy. When we looked closer, we also read hope in their eyes. We understood that for these loving parents, there was so much at stake here. They needed to believe their adult children would have a promising future. A chance to fit in, learn a skill and contribute to society in a meaningful way. A way to fully grow into adulthood with dignity. They were counting on SIU to change the trajectory of their adult children’s lives. 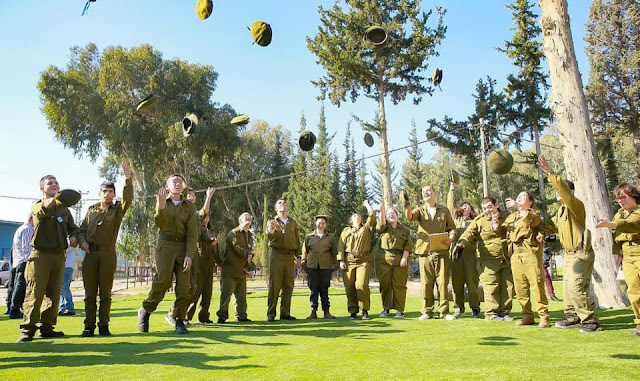 The base commander, a colonel, pulled all of his senior officers into the event and two of his senior officers spoke at length about the Special in Uniform program. The whole program was in Hebrew so we understood very little. But it was clear the IDF officers had the utmost respect for these young adults as they carefully pinned each new SIU soldier. I felt very privileged to have the opportunity to pin a few of these soldiers as well. And, as I looked into their eyes, I could see that they possessed a unique kind of courage having already fought against so many obstacles in their young lives.

At the conclusion of the ceremony, we witnessed the light in their faces, the pride of their parents, the hearty handshakes and enthusiastic applause. No English translation was necessary. The icing on the cake was when a father with tears in his eyes came up to us after the event, said todah (thank you) and shook our hands. One word from a father made everything we do for Jewish National Fund and Special in Uniform worth every hour and every dollar.
On the plane ride home, Roni and I wondered how programs like Special in Uniform change people's lives. We talked about the ripple effect that goes way beyond the special needs populations SIU serves. The parents, the sibs, the people our program members interact with like "typical" soldiers, and we, the donors all benefit from the goal of a stronger, more inclusive Israeli society. We can all help make this happen. Beyond our financial contributions, we individually bring skills, capabilities and work experiences to the table that can help these programs become stronger and more sustainable. We arrived back to Atlanta with a strong feeling that we do have a voice in Israel as the Jewish National Fund tagline says.
Alan Wolk is on the national board of Jewish National Fund and the chair for Special in Uniform, U.S. Board of Governors.
Roni Wolk is on the executive board for Women for Israel and the Chair for Women for Israel in Atlanta.

All gifts donated to JDAIM from now until Feb. 29 will be matched up to $1 million.
PLANT TREES IN ISRAEL