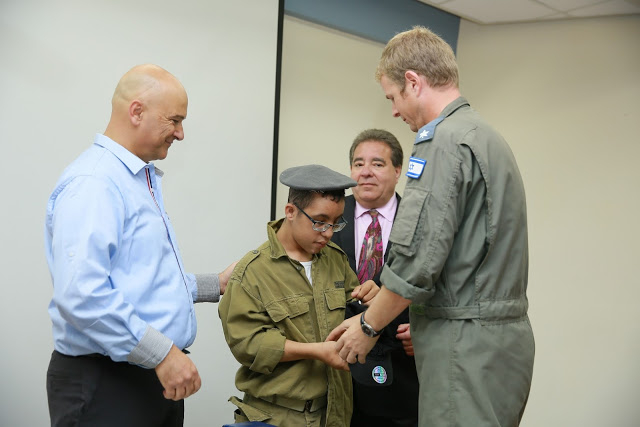 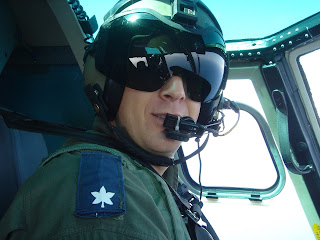 My name is Oren. I am 41, married to Hila, and the father of three. I've made a career serving in the Israel Defense Forces, and am a pilot. For 17 years I flew various types of helicopters helping Israel’s ground forces, making decisions during combat, rescuing the wounded, and helping families and friends during their darkest times.

Throughout my military career, I have held numerous command positions, and a year ago, I was chosen as the new deputy commander at the Palmachim Air Force Base, where some 4,500 live and work. During my two-week orientation and in between managing budgets, projects and contractors, one morning, the outgoing commander, Lt. Col. Moti, informed me that we were visiting a special place. "Special?" I asked. "You'll see," was all he would answer.

We arrived at a small compound where a group of soldiers with disabilities of varying degrees were mustered -- all had dreamed of serving in the Israel Defense Forces like everyone else in the country. Now, it’s crucial to understand that serving in the army in our small country is one of life's milestones; aside from maturing the person, the experience helps transition young people into adults.

For many hours that day I spoke with these young soldiers, understanding that each could have easily been classified "exempt from military service," and I learned from all of them the unique and very personal journey that brought them here to attain the status as an enlisted member of the IDF. Dozens of wonderful stories.

Recall the picture in my opening sentence? In that moment I understood what I was looking at -- boys and girls, no different from countless others who all their lives wanted to just be like their friends -- and now you can understand what it means to serve in the army, and understand their motivation. 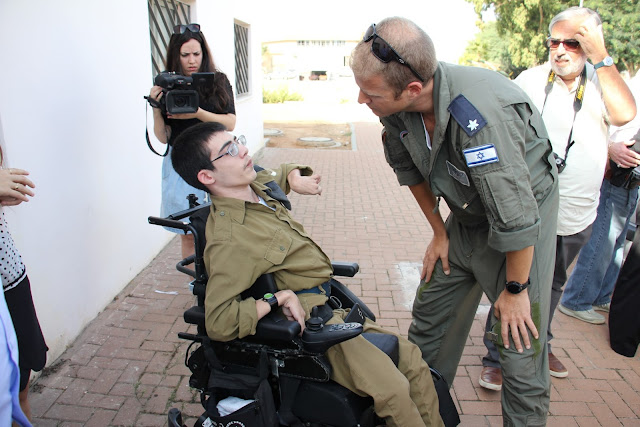 After a few weeks I witnessed something even more extraordinary unfolding: While the soldiers with disabilities had fulfilled their own dreams working alongside regular soldiers, those who really got the added value were the regular soldiers!

Take, for example, the female soldier who enlisted at 18 and serves as a technician or in an educational role or as a dental assistant, and works alongside a soldier with special needs. That same enlisted soldier mentors and aids the other, and they eat lunch together. Or the soldiers assigned to the kitchen and ensure we are regularly fed. With them works a soldier whose speech may sound a little strange and may have a difficult time walking, but together they perform the same tasks. These soldiers have doubled their responsibility by having the extra added value of caring for others.

Throughout my own training process, when physical conditions were put to the test, the commanders always conveyed a clear message: "You will not succeed alone. Only with teamwork will you succeed. Take care of your peers who are going through difficulties because they'll save you next time."

When I now ask soldiers how it is serving alongside someone with disabilities, they look at me strangely, almost as if they did not understand why I was asking them this ridiculous question. "He is like our brother," they often answer, "this place would not be the same without him."

There's something about this connection that gives me goosebumps every time I think of it. The future looks pretty good. After all, do you think a soldier who has served with someone with disabilities and later goes on to graduate with a degree in architecture will ever design a swimming pool without adding an accessible component for the handicapped? Or that a future manager would ever deny a job to a candidate with a disability? Not a chance.

The Special in Uniform program, generously funded by Jewish National Fund-USA, helps hundreds of young men and women with disabilities enlist and serve in the IDF like every other Israeli citizen. But just as much, it changes the enlistment and life forever for the many thousands of "regular" soldiers and officers they serve alongside. That is the power of this program and the great social change it has brought about.
PLANT TREES IN ISRAEL