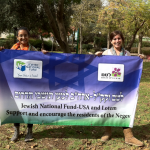 As someone who has been through the 2006 Lebanon War in one of Israel’s northern cities (Carmiel, which suffered some 160 rocket hits), none were as happy as I was at the idea of hosting residents from southern Israel at LOTEM's Farm at  Emek HaShalom, and at the possibility to make their time a pleasant one.

When operation Pillar of Defense began, we were contacted by our longstanding partners at the JNF, who inquired about our needs, for the purpose of assisting residents of the South at this hard time. That very day we requested JNF’s assistance in taking groups of children and adults with special needs from the South on stress-relieving day trips and activities, away from the battle zones. Gladly, JNF responded immediately, and we were able to take seven groups of children, adolescents and adults out on a restful activity in nature, within a day’s notice.
The first group that visited us at Emek HaShalom, near Yokne’am, was very diverse, and included children at kindergarten age, children in elementary school, adolescents and parents. Some children and youths even arrived without their parents. They didn’t ask for much – all they wanted was a short break from the harsh reality surrounding them at home. Success was not guaranteed, as visitors’ faces showed their worries, stress and fears. The young children cooperated fully, and clang to the olive workshop products without letting go, as if receiving an empowering force. Just before the group got on to the vehicles taking them back to Kibbutz Mishmar HaEmek, where they were staying at the time, we managed to take a short trip to Forer Spring, and hear more of their daily nightmarish routine in the South. We bid them farewell wishing them peace and quiet.
The next day a group of boys studying in grades 8-12 from Kedma Youth Village, came to Emek HaShalom by foot, after walking from Emi Spring, passing HaShofet Stream. Following an olive workshop that included producing oil at the olive press, the boys made pita bread at a field oven (taboon), a rich vegetable salad and tahini, with sweet krembo for dessert. A bit of small talk, a short goodbye, and on to the buses they went.
In Jerusalem we were visited by five more groups of adolescents and adults with mental disabilities, residing in hostels at Ashkelon, Ashdod and Be’er Sheva. All groups expressed endless gratitude for the opportunity to go out on a trip away from the battle area, at a time of pressure, stress and anxiety, which only amplified their everyday emotional difficulties.
The last group that came on a trip was one of women from a battered women’s shelter in Be’er Sheva. A day before JNF’s approach, the shelter’s manager at Be’er Sheva sent us a heartrending letter, pleading to take the women and children from the shelter on an outing away from the battle zones. In her words “it’s not enough that these women suffered violence at home for years, they are now coping with violence on a national scale, and the tension at the shelter is mounting…” Gladly, we were able to provide them with a day of joy and repose in the Jerusalem Mountains.

Emek HaShalom, the farm on which most of the activities during the fighting took place, stands true to its  Hebrew name – "a valley of peace". Our purpose at LOTEM is to provide peace, quiet, rest and tranquility to all who knock on our doors. We had the pleasure to give enjoyable experiences to these groups, who experienced difficult times living under routine rocket and missile barrages. We hope we succeeded in our mission, if only for a few hours, and pray for quieter and more tranquil days.
It should also be noted that thanks to JNF’s commitment and help, the Christian Embassy in Israel also joined in assisting LOTEM’s activity, enabling us to continue providing days of repose for the children of the South throughout the year. Although the military operation had come to its close, it must be kept in mind that its physical and mental consequences will sadly remain for a long time.
We would like to take this opportunity to thank all supporters at the JNF, who made it possible for us to carry out these activities.
PLANT TREES IN ISRAEL