Marathon man on a roll 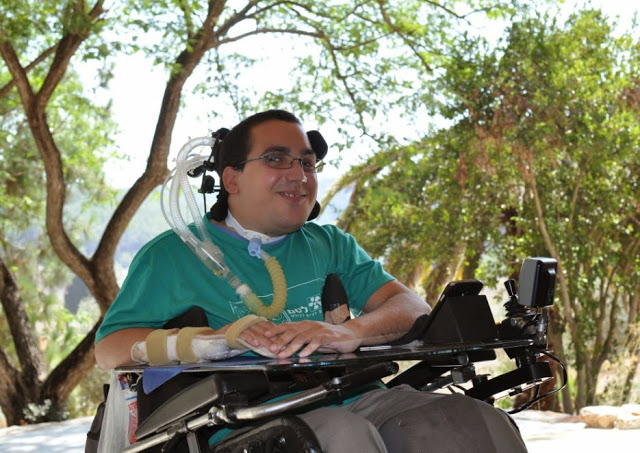 Reprinted from the Jerusalem Post by Abigail Klein Leichman
A car accident 11 years ago killed Eden Rutman and put her eight-and-a-half-year-old brother Raz in critical condition. When he regained consciousness after two months in the ICU, his mother, Esther, had to tell him the terrible news about his sister.
Then she added, “You have two choices: If you want, you can join Eden. If you want, you can live.”

Raz chose to live. And on March 21, a day after his 20th birthday, he will lead a group determined to finish the 800-meter accessi­ble route in the Jerusalem Marathon, to raise funds and awareness for LOTEM, the 20-year-old nonprofit that has become entwined in the lives of the Rutman family.

They’ll be participating as part of a larger team under the banner of Keren Kayemeth LeIsrael-Jewish National Fund, which has partnered with LOTEM for the past eight years to build accessible hiking trails and guide some 30,000 Israelis a year with phys­ical, communication and intellectual chal­lenges, hearing and vision impairments, who have an opportunity to experience the outdoors.

Other KKL-JNF partners, including farm­ers from the community of Halutza in the Negev and firefighters, will be running as part of this team.


The Rutmans live in the Galilee moshava of Yokne’am, close to LOTEM’s headquar­ters on the edge of the Nahal Hashofet Nature Park. Until the car crash that left him partially paralyzed and on a ventilator, Raz Rutman often roamed through the park with his buddies.

“Before the accident, I loved to travel and to hike,” he says. “When I came back from two years at Alyn Orthopedic Hospital and Rehabilitation Center, I couldn’t do it because the trail wasn’t accessible with a wheelchair.”

LOTEM learned of his disappointment through its soldier-guides and national ser­vice volunteers, who had been coming to the Rutmans daily to help out after the tragedy.

“The girls of LOTEM came every day from the moment we got back home,” relates Esther Rutman, who was also hurt in the accident along with three-year-old Yonatan. Her husband, Moshe, mostly stayed in the hospital with Raz, while Esther cared for Yonatan. When she gave birth a year later to Ariel, the LOTEM volunteers pitched in with both little boys.

“When Raz came home, they used to sit and help him with homework,” she says. “They did the writing for him because he was right-handed and now can only use his left. All these girls have a special place in our heart – they became part of our family.”

And they are largely responsible for moti­vating the KKL-JNF and other funders to raise about $1 million for LOTEM to build the first fully accessible circular hiking trail in Israel, in Nahal Hashofet.

“We made the park inclusive for people in wheelchairs and people who are blind, and Raz was able to come back to his favorite nature spot,” says KKL-JNF-LOTEM liaison Alisa Bodner.

“It gave me such a feeling of happiness and excitement that I could finally be in the place I always loved to be,” Rutman says. “I love Nahal Hashofet now as much as I did 11 years ago.”
In September, Rutman became a national service volunteer with LOTEM, which was started in 1993 by hiker Amos Ziv, after he saw a group of visually impaired teens hav­ing difficulty navigating a nature trail. Chairman Sorin Hershko became a paraple­gic due to injuries suffered as an IDF soldier participating in the rescue of Israeli hostag­es from Entebbe in 1976.
The organization’s main project is an eco­logical farm in Emek Hashalom near Yokne’am, where guides help people with disabilities participate in pressing grapes and olives, drawing well water and baking pita.
“I work in the office in Yokne’am together with the rest of the crew,” says Rutman. “Part of my job is to gather feedback from all the groups that LOTEM works with, and to evaluate their reports after each activity. I’m also a guide in Nahal Hashofet for groups from Israel and America, because of my story and my connection to the place.”
In addition, Rutman is in charge of LOTEM’s new Instagram account, and writes a monthly blog for the organiza­tion’s website. “Each month, I go to a differ­ent accessible places in Israel and write about it from my point of view, and then it’s uploaded to the website and translated into English [by Bodner],” he explains.
Naturally, his first post was about Nahal Hashofet.
“Ever since I can remember, I would always go to the nature reserve, wander in the forest, pick up the pine- cones and sometimes even get lost in my surround­ings (a very interesting experience, I must say). Today I no longer can climb, jump or run in the forest as I did when I was a child. However, I can still hike and enjoy nature on the accessible trail in Nahal Hashofet,” he wrote.
“Along the trail there are trees, shrubs, reeds and scented plants and other types of vegetation, which animals use as their nat­ural habitat, such as foxes and porcupines... The path itself is… wide enough for wheel­chairs and baby carriages. There are signs along the way, such as raised curbs for people who are blind so that they will know each time there is a bend or turn, and for people who use a walker or cane so that they can hike in a safe manner without deviating from the path.”
Accompanied and aided by his friend Yossi Filosof, and often by Bodner, Rutman is always happy to answer visitors’ ques­tions about his injuries and how he became a LOTEM guide. He says that after a few years of volunteering, he wants to study biochemistry and eventually make a career with LOTEM or KKL-JNF.
For now, his focus is on the accessible marathon route, which will be set up in Jerusalem’s Sacher Park. “It’s a great honor to be part of the team. I’ll be there in my wheelchair with my ventilation machine, and my family will be there too.”
Says his mother: “It’s a good way for us to give thanks to LOTEM, and to celebrate his birthday.”
To support Rutman and the rest of LOTEM’s delegation in the Jerusalem Marathon, go to http://support.jnf.org/goto/raz
PLANT TREES IN ISRAEL