Morning prayers and soldiers with special needs: In Israel, running a marathon like no other 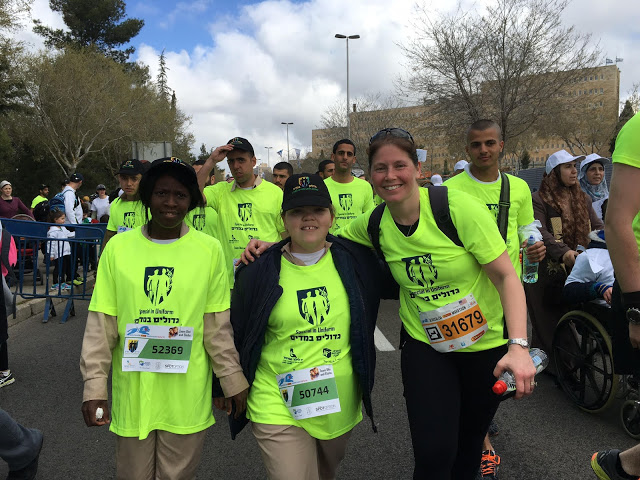 The Jerusalem Marathon last month was like no other race I've participated in. It was uniquely "Israel," with competitors praying the morning tefillot together in the parking garage with their tallitot hanging over their spandex running gear before heading out to the start line. It was competitive, with serious runners arriving from all over Israel and around the world to compete.
It was fun, with bands playing music, spectators cheering, and the mayor of Jerusalem making appearances at the start line and finish line (and seemingly everywhere in between). It was sentimental, with beautiful views of old and new Jerusalem. It was challenging, with hills (i.e. mountains) that laughed in the face of all my miles of flat Long Island training.
And it was emotionally intense.
Everywhere you looked was someone who had sacrificed to make all of this possible. I headed to the start line with my brother, who had just been away from his family for three weeks of miluim (annual army reserve duty), and a friend who had served in the army many years ago as a lone soldier, the term used for those who leave their country of origin, and their families abroad, to join the Israel Defense Forces.
While they raced off to tackle the half-marathon, I ran the 5k with my brother-in-law, now a partner in a law firm in Tel Aviv, who also served in the army as a lone soldier when he made aliyah years ago from Canada (that's somewhere north of New York, I'm told) and with my niece and nephew, who are our future. We ran behind groups of kids running in memory of friends recently killed in terror attacks. They literally wore their pain on the T-shirts on their backs. I've never before crossed a finish line with tears in my eyes and a lump in my throat...
And then we raced back to the start line and ran/jogged/walked/ danced and sang with the incredible soldiers of Special in Uniform. Special in Uniform is an amazing program that trains youth with special needs to serve in the IDF. They participate in a week of basic training, earn their pins and berets in an emotional graduation ceremony, and provide valuable service at their assigned bases, working in supply warehouses, the kitchen, or disassembling and packing computer components. They've even assisted with the IDF's humanitarian missions abroad, packing supplies for the emergency teams heading out to help after the Nepal earthquake, for example.
I was honored to run with Amit, a Special in Uniform soldier who told me how she had just fulfilled her dream not only to volunteer, but actually be drafted into the army. She told me how happy she was, even though now she was working harder than she had ever before. And it occurred to me just how incredible Special in Uniform is. In a country where so many people serve their country and make sacrifices for it, the program not only lets kids with special needs accomplish their personal milestones, it gives them the opportunity to contribute their unique abilities to society.
And when you see the support of IDF commanders and officers for this program, and you see how much these leaders value the contributions made by each of these special soldiers, it becomes quite clear that the IDF as a whole is "special in uniform." And you understand what a special country this is that places such value on each of its members and recognizes that each person adds value to the whole. And you know that despite whatever bumps Israel may face on this very, very hilly road, it is winning this race.
Sami Groff, an environmental lawyer, lives in Cedarhurst, N.Y., with her husband, three kids, a dog, and a rabbit. She has been involved with the JNF since joining the emergency solidarity mission during Operation Protective Edge in 2014.
PLANT TREES IN ISRAEL