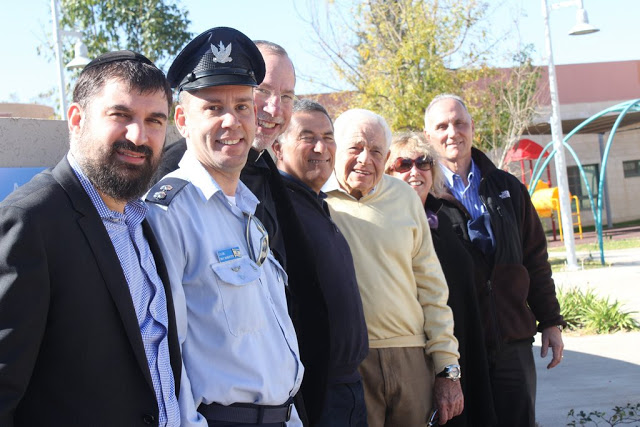 Eleven years ago, Israeli Air Force Commander Eliezer Shkedi invited me to speak at an officers’ induction ceremony at Tel Nof Air Force Base. While we were all mingling, engaged in small talk around the pool, a young major suddenly approached me.

"But Eran has no friends," I replied. "He can’t have friends because he's autistic, and he's also severely cognitively disabled."

"You have no idea how smart he is," Shai continued.

"I’m an engineer in the unit here. We’re the ones who put together and take apart the F-16s."

"I suppose any minute you’ll also be telling me that Eran knows aeronautics?" I quipped.

"Believe me, I learn so much from your son every single day. Every week I come to run with him, along with some of my friends from the unit."
Two years later, Shai Moskovitch was promoted to the rank of lieutenant colonel. At around the same time, Eran fell ill with a rare disease. Just like a brother, Shai could be found at Eran's bedside nearly every week.
Just one week after Eran passed away in early February 2007, 37-year-old Lt. Col. Shai Moskovich nearly died from a heart attack. After extensive rehabilitation and with great determination, six months later Shai was back on his feet, returning to senior command and administrative positions in the Air Force.
Only last week, in fact, he handed over the command of the engineering unit that had been in his charge for the past two years.
At last week's ceremony, Shai spoke of Eran and recounted the lessons he had learned from him.
“In Chapter 19 of the Book of Vayikra (Leviticus), the Jewish people are commanded, 'Love your fellow man as yourself.' Not every day are we granted the opportunity to perform a special deed on behalf of those who are different, an act of kindness which will make an indelible impact on our lives. I, personally, have been privileged to have had just such an opportunity.
"I am fortunate to have been exposed to a most amazing family -- the Aleh family, representatives of whom are here with us today. I have been able to work and contribute at least in a minor way on behalf of society’s vulnerable members. Never will I forget my visits with Eran Almog, the smile and look of sheer joy on his face during that first run. For me, it was an incomparable feeling of inner satisfaction each and every time I volunteered at Aleh Moriah in Gedera or at Aleh Negev-Nahalat Eran down south.
"I would like to take this opportunity to thank Major General (Res.) Doron Almog, Didi, Nitsan and Naama for allowing me to be a part of your wonderful family. Trust me. I received much more than I gave, and for that I will always be grateful."
I suppose that were it not for our dear son Eran of blessed memory -- the son who never once called me abba or ever even made eye contact with me -- I would never have had the privilege of meeting Shai or his friends. In fact, the marvelous village in the Negev would never have been built.
Shai Moskovitch was absolutely right. Our son Eran was smart. He was as wise as they come. His was the wisdom of the heart, which he continues to spread in his unique way all around the world.

Doron Almog is a retired IDF general and founder of Aleh Negev, a state-of-the-art rehabilitative community in the Negev desert.
PLANT TREES IN ISRAEL