On JLIM leadership mission, getting emotional in the Arava desert 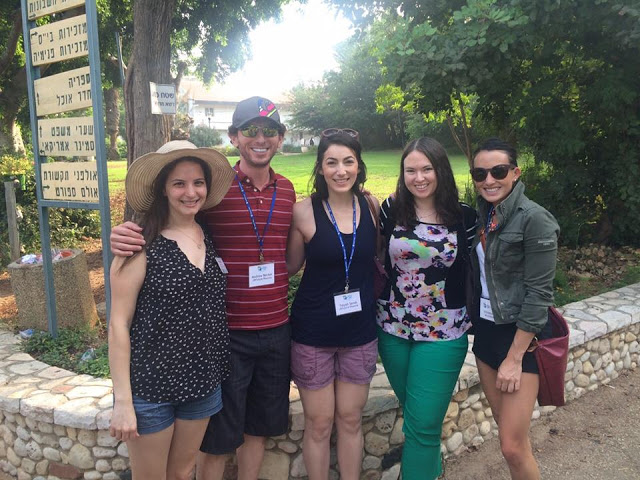 JNFuture Arizona board members are currently in Israel on the Jewish National Fund Leadership Mission in Israel (JLIM), and are sharing their impressions on the blog for the Jewish News, a weekly newspaper serving Greater Phoenix and Northern Arizona. Here, one participant shares some thoughts from the fourth day.

I had the understanding after 10 years of involvement in JNF that the Arava was an important project that revolved around agriculture innovation. I had no idea that the Arava desert itself was an example of Zionist pioneering to the greatest extent. About 4,000 pioneers have established themselves in one of the most extreme and difficult environments in the world to show our Jordanian neighbors that we are here and flourishing.
Our JNFuture group was fortunate to learn about the Arava from Noa Zer, resource development director of the Central Arava Regional Council. While I was impressed by the agriculture innovation and spirit of the residents, the Arava International Center for Agricultural Training (AICAT) school astounded me and I was overwhelmed with passion and a true sense of connectivity that I had not yet experienced with a specific JNF project.

The AICAT is a program in the Arava that attracts young adults from all over the world to learn about the Arava’s agricultural innovation. These students come from farming communities, mainly in southeast Asia and sub-Saharan Africa, where very little is known about Israel and the Jewish people, and much of which is rarely positive.
AICAT hosts 1,200 students every year among a population of only 4,000 people in the Arava. In addition to learning and practicing advanced farming skills, the students travel to historical Israeli sites and learn about the history of the land of Israel and its people. They return to their villages with not only an immense capability to transform their entire farming community, but also a deep understanding of Israel and its values.

Noa shared a story with me that nearly moved me to tears and I am proud to continue to share this story with my peers to explain the vision and passion of JNF.
Earlier this year, there were 165 students studying at AICAT from Nepal when the tragic earthquake shook their nation and destroyed everything they had. Their friends and family back in Nepal encouraged the 165 students to stay in Israel instead of returning home where everything was destroyed. The group of students discussed their situation and together came to a unanimous decision. Having recently visited Yad Vashem and learned about the Holocaust for the first time in their lives, the students from Nepal explained:

"Of course, we will return home to Nepal and help our people rebuild their nation. What we lost in the earthquake was just things and possessions. The Jewish people lost generations in the Holocaust, yet they still came to the land of Israel to rebuild their nation from scratch. This is the most important thing we learned while studying agriculture in the Arava -- building something from nothing through perseverance."

This story resonated so deeply in me that AICAT and the Arava have become my focus within JNF. The AICAT program is doing more than just teaching these students agriculture techniques to take back home with them and build their countries -- it gives them the knowledge to help spread the strong morals and values of the Israeli people in a positive light throughout the world. It is this ripple effect that is crucial to our growth and survival.

To read more about the JNFuture Arizona contingent's JLIM experiences on, follow the Jewish News blog.
PLANT TREES IN ISRAEL