Connecting to the Land, Not the Phone—A Day with Israeli-Druze Youth

Israel is home to approximately 140,000 members of the Druze faith, but today there’s a dozen or so young students waiting patiently for me as I park my car next to the Shrine of the Prophet Bha’a Aldeen, a local Druze holy site. By this point, I have spent several months in Israel and have only heard whisperings about the Druze community. They remain something of a mystery to the outside world, with terms like “secret religion” and “hidden in plain sight” used at times to describe them. But Green Horizons, an organization that offers outdoor educational activities to Israeli youth, is hoping to shed new light on their fascinating world by connecting Druze youth with nature, and Israel, as a whole.

For today’s adventure, I’m joining a group of mostly 8th and 9th graders led by Mhmad Hammud. Everyone is from Beit Jann, a small village nestled high in the hills of Israel’s Upper Galilee. Mohammad tells me we are going to hike up Mount Ha’Ari, meaning “lion” in Hebrew and named so because locals say lions lived in the area thousands of years ago.

For the modern day Druze youth, iPhones and Instagram have connected them to the outside world, but these hiking excursions are one way to renew their relationship with the land. Most of the kids speak both Hebrew and Arabic, and are currently learning English in school, so they’re excited to practice their language skills with this American that’s joined the group. “We get together once a week and we have a lot of fun,” Ravea Nafaa, the most outgoing of the bunch, tells me. “We go camping all around this area, and even though we go to the same school, Green Horizons has brought us closer together.”

After a few icebreaker games, we settle into a circle for mint tea and generous servings of manakeesh, a traditional pizza-like snack that the parents have prepared. Each of us got to choose our preferred topping—a tomato sauce or thyme, plus a whole tomato or cucumber for a side dish. I confess that I’ve never eaten a tomato or cucumber whole like that before, and the hilarity of my awkward attempt at trying to is not lost in translation. Mohammad also assigns each member of the group a task so that clean-up is done quickly.

Beit Jann has one high school with around 200 kids in each grade, so the weekly Green Horizons meetings are a breath of fresh air and a unique learning experience for the students. “For many years, I dreamt of expanding our programs for Druze youth, and I am very happy that this year we have successfully opened three groups,” Lavi Zamora, CEO of Green Horizons, told me before my visit. “While we count Jewish National Fund-USA as a partner, we hope to continue to raise the resources necessary to give every Druze kid the chance to be a part of this important program.” 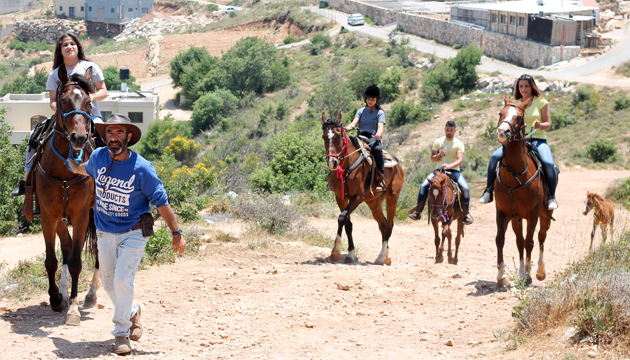 “We learn how to make fires, survive in the wild, and it’s always an adventure,” says Jana Shaheen, one of the younger participants in the program. I was also told how after graduation, the boys will go to the army, while the girls will be off to university. Although the Druze are part of Israel’s Arab minority, they have a long and proud history of serving in the Israel Defense Forces. “The Druze community is an integral part of Israeli society. I have fought alongside and commanded many Druze soldiers, and have friends from the community,” Zamora told me, explaining the uniqueness of Israel’s Druze population. Young women, however, do not serve in the military, but they still have ambitions to become doctors, teachers, and explore the world outside their village.

Green Horizons aims to prepare each of them for their journeys with challenging excursions, all of which are led by experienced counselors, like Mohammad. Standing at the edge of a scenic lookout, Mohammad says Beit Jann is known as the “Switzerland of Israel,” drawing tourists who come for the horseback riding and stunning panoramic views. “Parents enroll their kids in this program in the hopes that it will get them outside and interacting with the environment around them. And it does,” he says. Zamora also explains that the program helps Druze youth meet their Jewish counterparts from nearby communities, “They travel and learn together, and it’s in this way that they understand how intertwined their communities are to each other and to the State of Israel.”

Looking out across the land, the kids call out the names of the cities dotting the landscape below us, and point to the highway that will take me home. Green Horizons may inspire them to take that road to far off lands and make a difference in the world, or they may come back to Beit Jann to lead a group of their own someday. No matter which path they take, one thing is certain: they will not only know how to survive, but they will thrive and be successful.