From Generation to Generation: JNF-USA Thrives on Legacy

As Jewish National Fund-USA celebrates the 65th anniversary of its 69th Street Manhattan headquarters, today known as Ronald S. Lauder JNF House, the organization pays homage to its illustrious list of former leaders including Albert Schiff, one of the Zionist movements greatest visionaries - and a legacy that lives on today, reports MATT ROBINSON.

If you ascend from the building’s Jerusalem limestone accented lobby to the expansive yet modest second-floor boardroom, you will see the faces of JNF-USA’s illustrious past leaders. Among them is former long-time JNF-USA leader and Zionist pioneer, Albert Schiff.

Schiff’s story is arguably the embodiment of the American Zionist spirit. 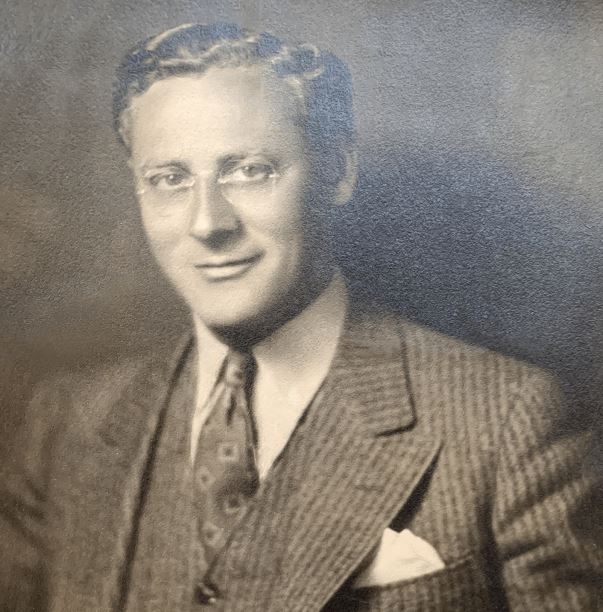 Born Abraham Schiff in the small Lithuanian village of Laizeva in 1883, Albert was the youngest of what his grandson – Stanford University Professor Dr. Arnold Milstein – describes as a modestly prosperous family that included more than 10 siblings.” On long walks with his maternal grandfather Albert, Arnold remembers Albert describing his mother’s great satisfaction with selling her few items of jewelry to enable Laizeva’s very poorest families to emigrate to America.

The descendant of a three century lineage of orthodox rabbis who migrated to Lithuania from Prague, Albert’s father sought to sustain this legacy by sending Albert and his brothers at age 12 at a renowned “progressive” Yeshiva in Telse. Albert’s sense of Jewish values continued in America, where he served for many years as a member of the board of directors of JNF-USA in addition to his leadership roles within other prominent Jewish and Zionist organizations. His dedication to Zionism was catalyzed by the ever-present dangers to Jews experienced by his family and sustained by Czarist rule and cultural anti-Semitism.

On the international scene, Schiff was also involved in early efforts to create companies that would enable Jewish immigrants to prosper in British Mandate Palestine. After WWII he helped to lead American efforts to protect the area's Jewish communities from attack by neighboring Arab armies and the acquisition of ships used to transport Holocaust survivors out of Europe, including the famed S.S. President Warfield, the boat described in the film and novel “Exodus”.

Joining several of his older brothers in America, he and his brother Robert took over a struggling shoe store in a small Ohio town. They used their modest initial profits and a bank loan to open the first independently owned shoe department in a Peoria general store. Albert and his brother went on to create the Shoe Corp of America, one of America’s largest national shoe retailer and manufacturing firms.

Before  being elected president of JNF-USA in 1960, Schiff was a founding member of the Sonneborn Institute, established to fund the creation of the Mossad  and export weapons to prepare Jews in Palestine for invasions by neighboring armies preparing to eradicate the State of Israel immediately after its birth in 1948.

“Apparently, the Goldmans lived next door,” said JNF-USA Tri-State Executive Director, Michael Feinman. “Though much of it has been preserved as it was, portions of the building were recently updated to garner environmentally friendly LEED certification.

“We could have sold it, but this is our place,” Feinman maintained. “We have a lot of history here!”

At the time of the building’s purchase by JNF-USA, many of the Jewish community’s largest organizations were located between 59th and 79th street on the East Side of Manhattan. Today, Feinman said, only UJA remains.

“Our Chairperson-emeritus Ronald Lauder also lives nearby,” he added.

In addition to supporting the purchase the 69th Street building, Schiff delivered the opening address at the new headquarters’ dedication ceremony on November 6, 1955. He and his wife Ethel hosted meetings and receptions at the headquarters to build and sustain Israel during its early economically tenuous years.

Schiff forged close ties with Israeli Prime Minister David Ben-Gurion, President Chaim Weizmann, American First Lady Eleanor Roosevelt and President John F Kennedy. He also developed a long-standing philanthropic tradition within his own family, many of whom continue to serve and support the State of Israel. 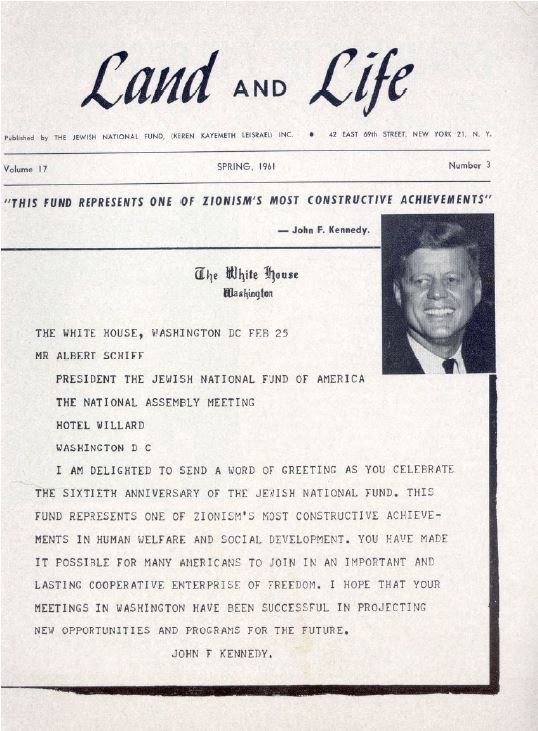 Schiff’s daughter, Elaine Schiff Milstein, included JNF-USA in her estate planning, naming JNF-USA as the beneficiary of a life insurance policy purchased in the 1960s. It is such inter-generational giving and support that has allowed JNF-USA to provide its partners (donors) with an enduring legacy in support of the land and people of Israel and Jewish people everywhere.

When asked what was his grandfather’s main legacy, grandson Arnold Milstein replied “empathy.”

“The individuals upon whom the good fortune of achieving [financial] wealth in the U.S. is highly unpredictable,” he observed. “His exposure to the tenuousness of life and the abject poverty of most Jewish communities in Eastern Europe permanently imbued  on his sense of charitable lesson one – that regardless of your luck as  life unfolds, never forget those whom you encountered along the way whose day-to-day existence hangs in the balance.”

As for lesson two, Milstein cited his grandfather’s deep desire to deal not just with superficial issues, but to address the root cause.

“Instead of investing his wealth in enabling emigration by people from his village,” Milstein said of his grandfather, “he realized that establishing a homeland where Jews were free to govern and protect themselves was the only destination that would end the miseries and insecurities that he had observed in the small Jewish shtetl of his childhood.

Once the State of Israel had been established, Milstein added that Schiff continued to work at root causes that prevented the early Jewish state from prospering to its current level that would have seemed inconceivable to him during the 1960s . 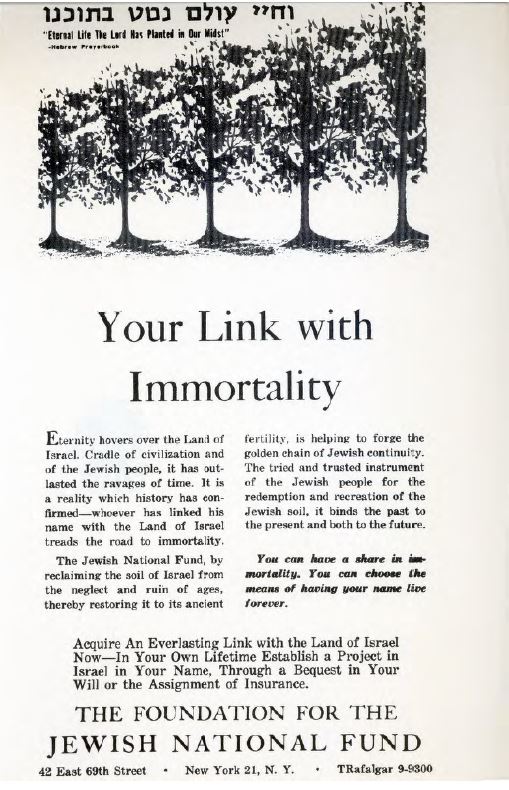 “Subsequent global developments underscore the importance to humanity and to the survival of our species of investing more in forests,” Milstein explained, citing one of JNF-USA’s primary undertakings, “which are among our most important means of absorbing atmospheric CO2.”

And while he realized that this was not the primary reason for tree planting in Israel, Milstein was keen to point out its “additional global benefit.”

“Once the State of Israel was established,” Milstein said, “what he most cared about was the success of JNF-USA in developing the forests and water resources of Israel.”

Protection and preservation of the precious resources has since grown into a global concern with which JNF-USA has been most supportive.   “These are both at the top of the list of what science believes needs to be done to protect and preserve humans globally ,” Milstein said, “ A dividend not only to Israel but to the world that  grew out of root cause analysis in ways that nobody could foresee.”

In fact, Milstein credits his grandfather’s “root cause” ideal with his own choice to go into medicine and his mother’s choice to support his career path.

“[My mother] discouraged me from pursuing a business career and towards something that, in her mind, allowed me to help other people,”. His own decision to “focus on research grew out of my realization that it would create more public benefit than  practicing Medicine.  I intuitively sensed and adopted my grandfather’s propensity for root cause analysis and creating solutions likely to benefit many.”

According to Milstein, Schiff saw the reestablishment of a Jewish homeland as “the only way that his people could escape periodic upsurges of demonization and persecution following their 1900 year-long exile.”

Schiff was so dedicated to this family-instilled cause, in fact, that he retired from the shoe business and became involved in Jewish philanthropic life full-time. In 1948, Schiff formed the Israel Corporation of America, which was the forerunner of Israel Bonds. Later on, he would become president of JNF-USA.

Upon Schiff’s election, an editorial entitled “A Happy Choice” claimed that Schiff was “an eminently qualified man at the helm of the oldest and surely one of the most highly regarded agencies for the development of Israel.” It also observed how Schiff had “always enjoyed the respect and admiration of his associates,” both in the worlds of business and philanthropy.

“In his newest post,” the piece read, “Mr. Schiff will be able to bring to bear all of his unique abilities on behalf of a cause that has been dear to his heart as long as he can remember.”

Evidently, the crafters of the editorial were not the only ones to recognize Schiff’s love of and dedication to the Jewish State. In 1951, Schiff was personally invited to be part of the American welcoming committee for Ben-Gurion by Israeli Ambassador Abba Eban, who cited Schiff’s “deep interest…in the State of Israel” as reason for the invitation. Eban later contacted Schiff to ask him to help “promote the study and dissemination of the Hebrew language and culture as a bridge between Israel and the Jewish community of the United States.”

Schiff was also invited to a special reception with Ben-Gurion where he was given a personalized tour of the Israeli Navy’s S.S. Misgav during its first official visit to New York Harbor. The next year, a celebratory dinner was prepared in Schiff’s honor in his adopted home of Ohio, the admission for which was $3 a plate and the culmination of which was the announcement of the planting of 10,000 trees in the Albert and Ethel Schiff Forest in Israel by JNF.

“The tribute paid to him by the community he has served and led is richly merited,” said Dr. Israel Goldstein of the World Confederation of General Zionists at the time. “That it should take the form of a forest of trees in Israel is a particularly appropriate symbol of a career fruitful in good deeds.”

In 1953, Goldstein also called upon Schiff to help with the celebration of the 3,000th anniversary of Jerusalem, citing Schiff’s “well-rounded interest in the most important aspects of Jewish life.” That same year, Schiff also served on a reception committee for President Harry S. Truman, who also served as honorary chairman of the American Freedom Forest Committee, which planted trees in Israel under the auspices of JNF.

It was in this forest that New York Mayor Robert F. Wagner (whose father, Senator Robert F. Wagner, also has a forest in his name in Israel) and Schiff worked to erect a model of the Statue of Liberty as a sign of friendship and partnership between the United States and Israel.

In addition to making many professional pitches on behalf of the organization, Schiff also offered a more personal one as well.

And this is what Schiff’s daughter, Elaine did by making JNF-USA a beneficiary of her life insurance policy, in honor of her father’s legacy.

It is this premise of legacy that was among Schiff’s most influential ideas and one that has clearly continued through his own family and through those of many other JNF-USA supporters.

Schiff’s sense of legacy and his ties to JNF are so strong that he was asked to draft the copy for a 60th anniversary retrospective in 1961. In it, he congratulated his colleagues for establishing an organization and an international movement that “can be not only happy in the consciousness of a tremendous historical task brought forward, but also proud of the general appreciation and acclaim it has received.”

Schiff also cited the famed blue boxes as part of a “wide framework” that enabled “every Jew in the world to personally participate in the redemption of …the Jewish Homeland.”

Through his family, that framework and legacy is being maintained and expanded, generation by generation today, tomorrow, and forever.