As Israelis and people around the world continue to face challenges in their daily lives during the ongoing COVID-19 pandemic adapting many of their norms and habits, Jewish National Fund-USA’s (JNF-USA) Housing Development Fund (HDF) has been moving forward with expanding housing projects in small Israeli communities in the Negev Desert and Galilee.

So far, the HDF has helped prepare more than 1,300 housing lots among 29 communities throughout Israel, including more than 600 lots in twelve communities in the Negev Desert, providing essential additional housing in the region, while helping change the Israeli mindset on the issue of living in the center vs. on the frontier.

Thankfully, JNF-USA’s Housing Development Fund shows no signs of slowing down with the number of supported housing sites set to grow over the coming months and years.

With an increasingly ageing population, kibbutzim and other communities in Israel’s south are beginning to view the influx of new residents relocating from the country’s crowded center as an opportunity for growth and renewal.

According to JNF-USA partner (donor), Jeffery Schwartz, co-founder of JNF-USA’s Housing Development Fund, demand for housing in these smaller Negev Desert communities has grown since the onset of the pandemic.

“We had been steadily working, doing quite well with the [Housing Development] Fund,” said Schwartz. “Then as a result of COVID-19, the demand for moving to the 29 communities we are working with [in Israel’s north and south] went up as all of a sudden it made a lot more sense to people who now see them as a viable option to raise families, with more space and away from crowded cities.”

One popular statistic holds that 80% of Israel’s population resides on just 20% of the country’s landmass, and JNF-USA’s Housing Development Fund is “helping in its own modest way to give those numbers a little shake”, he added.

“Pioneers go to the South,” declared Schwartz. “These pioneers are saying ‘we want to do this.’ COVID-19 is far less prevalent in the Negev. Kids there are running around with the same freedom they have always had.”

JNF-USA’s Housing Development Fund views the assistance they provide for families interested in moving to the Negev and Galilee as an imperative for Israel’s secure and lasting future by providing funding for the creation of housing sites which are needed first according to local regulations before the construction of homes can commence.

Unlike in the United States, there is no private residential development in Israel.  All development is controlled by the municipalities. Only after all the lots in a development are purchased and financed, can that physical infrastructure be developed, causing delays of up to five years in the start of housing construction. 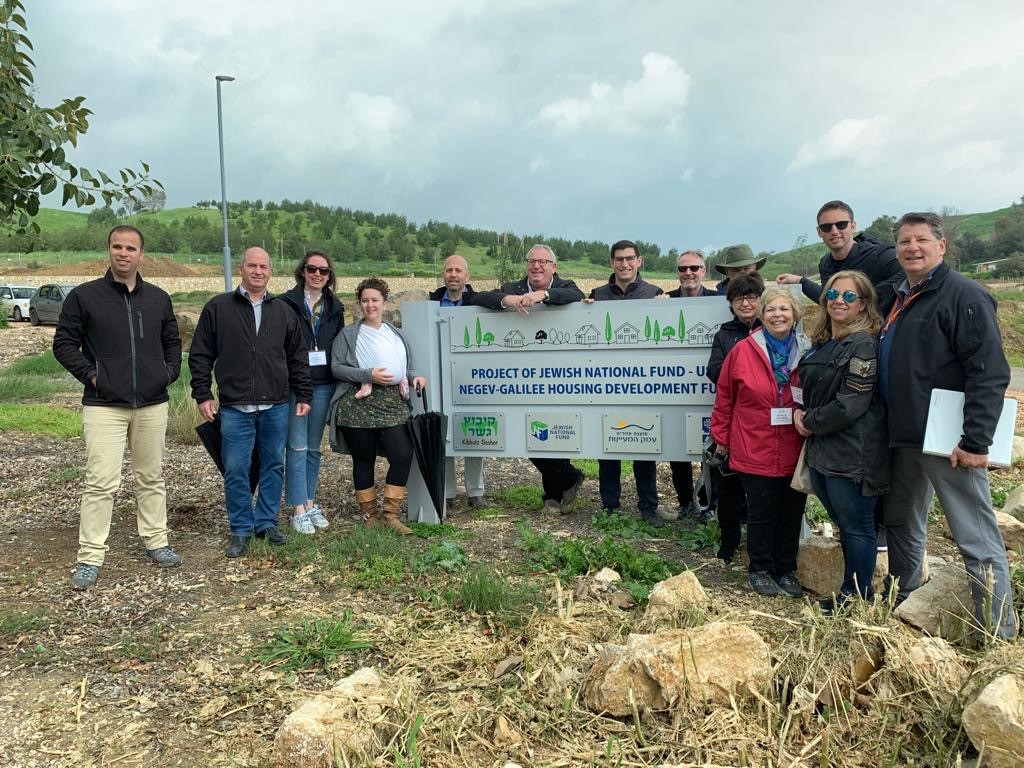 One change which has made it possible for people to consider living in Israel’s southern region is the improved transportation infrastructure which allows people to take the train from Be’er Sheva for a one-hour commute to work in Jerusalem or Tel Aviv, he said.

Still, many small communities lack the necessary capital to develop their land for housing. This is where JNF-USA’s Housing Development Fund steps in by providing loans to communities and provides them with the capital necessary for ground infrastructure to be completed.

“It is not easy,” Schwartz admitted. “But if it was easier, JNF-USA would not be doing it—somebody else would. Some of the communities we are working with would not be viable without this help. A lot of the communities we work with are afraid to take the risk, but JNF-USA’s Housing Development Fund provides them with the confidence to take the risk of moving forward [with the new development].”

Howard Wallick, Housing Development Fund taskforce member, and member of the JNF-USA New York Board of Directors, comes from a family real estate business headquartered in Columbus, Ohio. Since making aliyah (immigration to Israel) he has been focusing his attention on issues regarding housing development in Israel. He noted that new Knesset Member and environmental activist Alon Tal from Kibbutz Ketura, has said that in Israel some 60,000 new housing units a year need to be constructed to accommodate Israel’s population growth.

“JNF-USA’s Housing Development Fund is encouraging people to move to these small southern communities, and while the housing projects are small in numbers it is important for Israelis to live in these frontier communities,” Wallick said. “It is important for the kind of pioneer mentality which has been lost to a great extent, but which still exists in those kinds of smaller communities. It is wonderful to encourage that kind of spirit and to enable those communities to grow in a sustainable manner. It may be a drop in the bucket, but it is an important drop in the bucket. This is the Negev Desert, Israel’s core, and it is important to get people there.”

At the same time, he said, it is important to make sure those communities can provide the proper infrastructure for families to maintain the quality-of-life people are accustomed to.”

“With the proper infrastructure and site development you can get mostly young families who want to be pioneers to come and live in these kinds of places. They are beautiful, quiet communities with the opposite of a (fast-paced) urban lifestyle,” he said. “But the small communities JNF-USA works with have no way to finance the infrastructure and they have to sell those first houses in order to put up the money for development. However, putting that financial burden on young families is an impediment to the development of the small communities.”

Having recently visited some of the Housing Development Fund communities, Wallick commented on the dichotomy of feeling like you are in “the most remote part of Israel” in a small place like Be’er Milka, a moshav located in the central Negev desert close to the Egyptian border, with modern transportation infrastructure the moshav is only a 40-minute drive from Sde Boker, and an hour from Be’er Sheva.

“When you are there, you are sure it is very remote, in the middle of the desert. You can see Egyptian soldiers. It is definitely for people who want a more isolated, quiet lifestyle though some of the communities are not as remote,” he said. “It is a different lifestyle. It is not Jerusalem or Tel Aviv; it is not even Be’er Sheva. But the idea is also to provide these communities with infrastructure and site development to make sure they have basic services such as water, sewage, electricity, and internet, and can easily get to health clinics.”

Schwartz said that with the unique philanthropic structure of the Housing Development Fund, though funding is a gift, it is not a grant. Money within the fund constantly gets recycled and donors are able to see their gift being reused.

“I am building a future. When I go to Israel and I look at a community where the housing fund has developed, or when I bring new donors to the area, I have a good feeling,” Schwartz said. “There really is something special about being a part of community building in Israel in an area that has never been built up before. It is not cutting down a forest to build a house; it is building in the middle of the desert.”

“The Housing Development Fund is amazing, but it could be ten times bigger,” added Seth Bernstein, a JNF-USA donor in Atlanta and longtime member of the JNF-USA Housing Development Fund Task Force. “The growth potential is there. All we need are more donors so we can do this on a much larger scale and help more families who want to move out of larger cities to a smaller place where their kids can play on their front lawns. They want that type of life just like American families want that type of life.”