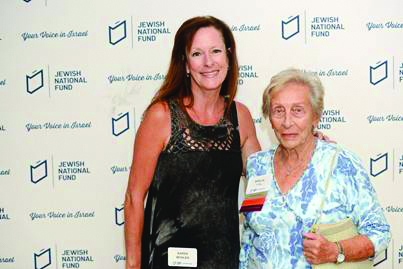 The eldest of three siblings, Stella Luftig was raised in a secular Jewish family in a working-class district in Vienna, Austria.

In 1938, the arrival of the Nazis prompted the emigration of the Luftig family. Stella’s parents went to Shanghai, China, leaving the children behind because they feared what life would be like in a foreign city. Stella’s sister went to England on the Kindertransport; her brother illegally crossed the border from Germany into Belgium; and Stella applied for a permit to work as a housemaid in Britain. She was only 18.

“It wasn’t easy to be in high school and then a housemaid, but when you are young it is not such a problem,” she said.

On December 7, 2020 Stella turned 100-years-old. Reflecting on her life in an interview with Jewish National Fund-USA (JNF-USA), the centenarian said she does not view herself as a survivor because she was never in a concentration camp, that immigrating to England spared her from the horrors of the Shoah.

“I did not have the worst experiences. Nothing like the people who stayed in Austria and Germany.”

Several years ago, Stella participated in a lawsuit on behalf of Jews that lost belongings and property during World War II. After winning the suit, Stella was granted reparations from the German government.

Rather than keep the money, however, Stella donated the funds to causes dedicated to strengthening the land and the people of Israel. As a supporter of Israel who had visited several times, she gave the funds to Hebrew University, Magen David Adom, Hadassah, and JNF-USA, believing Israel crucial to the survival of Jewish peoplehood and the embodiment of Jewish persistence.

She supports JNF-USA through a charitable gift annuity, which, in exchange for her contribution, provides her with a secure source of fixed payments for life. For people over the age of 90, JNF provides annuity holders with a nine-percent payout every year.

“Most of my money is in annuities for different Israeli organizations, and I live on the interest and the capital,” Stella said. “I do not think I will make it to 120—I do not think I even want to—so I will be very glad to hear the money I have will go to Israel.”

Stella has led a comfortable life. She was married twice, including to her late second husband for 40 years, and lives today in Broward County, Florida. She has five nieces and nephews as well as four grandnieces.

Before her retirement, she worked as a typesetter, printing Hebrew-language Old Testaments on a monotype-typesetting machine. Besides this work, the articulate woman, who has not shed her European accent, said, “Talking is my favorite occupation.”

Like everyone, she has been dealing with the tedium of life with COVID-19. While the pandemic prevented any large celebrations from taking place for her recent birthday, she has always preferred to keep her birthdays low-key.

“I beg my niece: Please no surprise parties.”