The Incredible Life and Legacy of Ellen Barnett

Having escaped the Nazis at the age of 13, Ellen Barnett (Z”L) maintained a fierce desire to help her fellow Jews throughout her more than 100-year lifetime. According to Ellen’s family, her desire to give to others was deeply rooted and formed a great part of their identity as well. 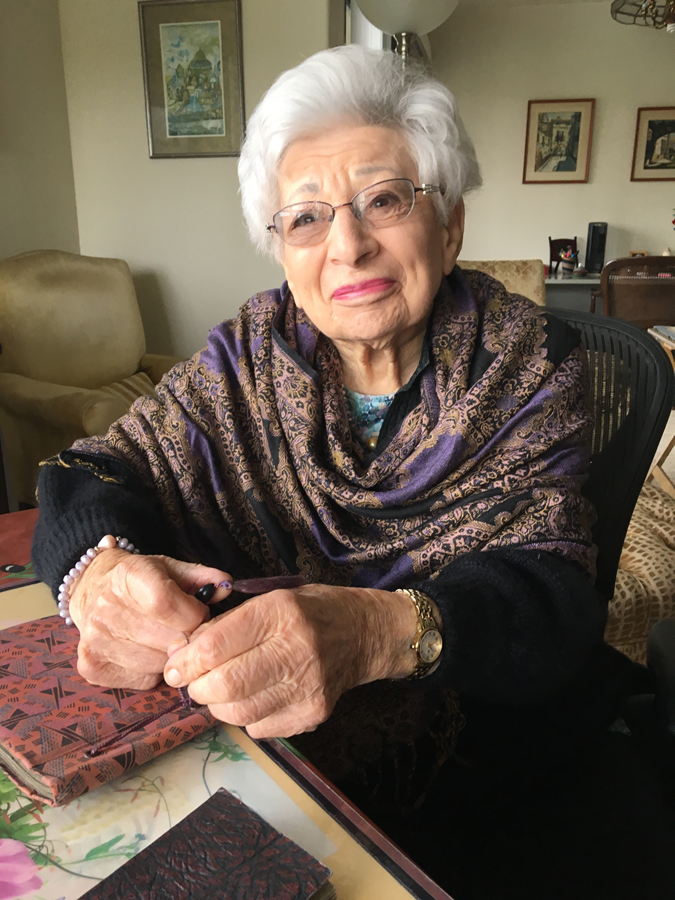 “Mom was truly a wonderful soul,” says her eldest daughter, Marion Rieger, “and made Israel her passion!”

“It is continuing something that was begun by her family in Israel’s infancy,” agrees Marion’s younger sister, Judith Moncarz.

Born in 1920 in Frankfurt, Germany, Ellen Barnett fled the country nine months after Hitler became chancellor, joining her sister and brother in London.

Moving away from the heart of the problem did not keep Ellen out of the War. In fact, one day after Britain declared war on Germany, she enlisted in The Women’s Land Army, taking on the strenuous jobs that had been vacated by the men who had gone off to fight. After 18 months, Ellen joined the Auxiliary Territorial Service, quickly rising to the rank of Company Sergeant-Major. When the War ended, she continued to work against the defeated Nazis by joining a team that made sure they were not hiding any useful materials in their oil refineries.

During her 40 years of marriage, Ellen worked with her husband in their international stencil duplicating company – Gestetner. Fluent in German, French, and English, she was a great resource for the company and traveled extensively, including in Africa, where Marion and her sister were born. Along the way, she met many Zionists and became closely tied to the movement herself, eventually going to Israel herself to contribute to Kibbutz Ein Gev on Lake Tiberias in Israel’s north.

“Her love of Israel started back in 1950,” Marion recalls, noting how Ellen’s uncle, Sigmund Gestetner, had introduced her to Israeli President Chaim Weizmann and former Jerusalem Mayor Teddy Kolleck while she worked on the kibbutz. She also became close friends with the family of Henrietta Szold (founder of Hadassah) and many of David Ben Gurion’s advisors.

When she came to the United States, Judith notes that Ellen was active in many Jewish organizations, including Hadassah, Brandeis Women’s Committee, and UJA.

Her daughters agree that “She was not only a member and contributor of numerous Jewish organizations,” Rieger adds, “but a vocal leader with a say in all of them. She wanted all sects, cultures, people of Israel to live harmoniously.”

During her long and story-filled life, Ellen Barnett, through her continuous support, became a member of JNF-USA’s President’s Society and Sapphire Society (JNF’s major gifts division for women).  She gave to JNF-USA’s community building and water renewal initiatives.

According to Marion, “She saw the water as pivotal to Israel.” “She was both giving and philanthropic,” noting how her mother was known as a “a woman of valor” who always “led by example.”

“Ellen Barnett gave to Jewish National Fund-USA year after year,” notes JNF-USA’s West Coast Planned Giving Director, Cynthia Hizami, who makes special mention of Barnett’s support of JNF-USA’s not only during life but also at her passing when she named JNF-USA as a beneficiary of her trust. “Her support through a charitable remainder annuity trust and a charitable remainder unitrust continued her legacy. We feel fortunate to have called her a friend of JNF-USA and value her partnership and continuing legacy.”

As her mother was such a dedicated philanthropist and athlete (which Marion credits for Ellen’s long life), her daughters explain that the supportive programs at ALEH Negev (JNF-USA’s Israeli affiliate that supports people with intellectual disabilities in Israel) were particularly attractive when it came time to choose a recipient of the bequest.

“When we saw the programs with the horse therapy,” they say, “we knew that would have appealed to our mom.”

According to her daughters, her mother’s donation will specifically benefit ALEH Negev’s therapy and treatment programs and their neuro-orthopedic rehabilitation hospital.

“Mom had a deep love for Israel, its country, and its people,” Judith maintains. “She believed in causes that would help people today and would also continue to benefit future generations. She wanted everyone to reach their full potential.”

To leave a legacy for the land and people of Israel, visit jnflegacy.org or contact Matt Bernstein, chief planned giving officer at [email protected] or call 212.879.9305 ext.292.