Ammunition Hill holds great significance in the formation of the modern Jewish State. First established by the British in the 1930’s as a police academy and weapons repository, the strategic location was captured by the Jordanians in the 1948 War of Independence, splitting Jewish Jerusalem in two. In the Six-Day War of 1967, about 150 Israeli paratroopers staged a daring assault to recapture the site. In bloody, hand-to-hand combat, the Israelis emerged victorious, but not without sustaining severe losses — 36 killed, 90 wounded.

Jewish National Fund-USA, together with the Municipality of Jerusalem and the Government of Israel, has been instrumental in developing and renovating Ammunition Hill as a heritage site, which includes a museum and memorial where visitors, young and old, can learn about what transpired there. JNF-USA has also established The Wall of Honor at Ammunition Hill, which pays tribute, by name, to the heroism and courage of Jewish soldiers throughout history who fought in loyal defense of the countries in which they lived.

Motta Gur (1930-1995), who commanded the charge on Ammunition Hill, is remembered as a great Israeli military hero. To Joe Korn, however, Motta was almost a member of his family. That’s why Joe and his family decided to dedicate a plaque to Motta on Jewish National Fund-USA’s (JNF-USA) Wall of Honor, a project to honor Jewish individuals of all nationalities who served in uniform to defend their countries, at Ammunition Hill. 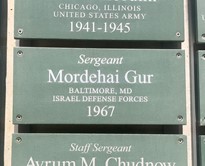 A civil engineer, builder, and real estate developer who now resides in Basking Ridge, NJ, Joe was a child when he first met Motta and wife Rita in the early 1970s. Joe grew up in the DC area at the time, and Motta had just been appointed military attaché to the Israeli embassy.

Rita and Joe’s mother, Maryla, already knew each other from Israel. Originally from Poland, Maryla Orgel is a Holocaust survivor who moved briefly to Israel before relocating to America to join her new husband, David Korn, also a survivor. In Israel, she had become close friends with Rita’s sister, so it was only natural for Rita and Maryla to connect in Washington.

The Korns and the Gurs saw a lot of each other in those days. “I would say we spent every weekend together,” Joe remembers. In 1974, after the Yom Kippur War, the Gurs returned home to Israel, but the two families maintained a strong friendship as Motta continued to advance in his career, becoming IDF Chief of Staff, planning and executing Operation Entebbe, and later serving as a member of Knesset and in various ministerial posts.

Joe describes visiting the Gurs in Israel many times. On the occasion of Joe’s bar mitzvah, Motta presented him with a tallis bag that a gift from the Chief Rabbi of Jerusalem commemorating his city’s reunification. Whenever Joe was in Israel on a mission, he and Motta would make time to catch up. When Motta later became a children’s author, he inscribed a special copy to Joe and his sister.

When Joe learned about JNF-USA’s Wall of Honor at Ammunition Hall, it was an easy decision to honor Motta. He knew that the official museum at Ammunition Hill would honor Motta’s prominent role in that battle through words, photos, and even audio recording -- Motta’s voice can be heard proclaiming the historic words, “The Temple Mount is in our hands! (Har HaBayit BeYadeinu)” -- but Joe felt there needed to be a personal tribute to Motta, as well. “He was like an uncle to me. Our families were good friends. I knew him and I cared for him.”

In dedicating a plaque to Motta at Ammunition Hill, Joe Korn, wife Beth, mother Maryla, and sister Monique Buckles feel they have honored a longtime family friend who also was a great public figure. Joe describes the gift from the Korn Family Foundation as “a thing of love, and nothing more. The relationship meant a great deal to us.” He looks forward to visiting the Wall of Honor on his next visit to Israel.