A Chanukah message of miracles 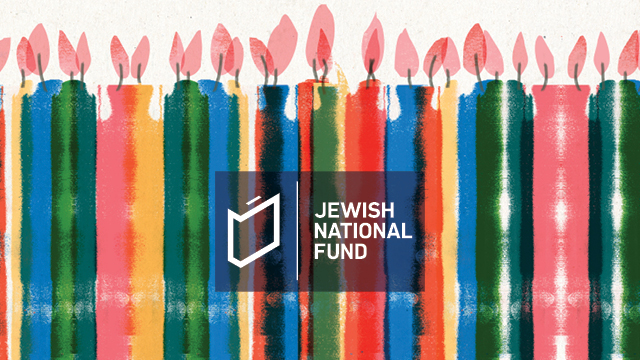 At the beginning of this program, we all stood and sang two national anthems, the Star Spangled Banner and Hatikvah.  Hatikvah is a song of hope -- the Jewish people’s 2,000 year old hope to return to the land of Israel.

Last night, we started our Chanukah celebration. Chanukah is about a miracle.  When the Maccabees reclaimed  our Temple in Jerusalem. And the oil we found for our Menorah  burned for eight days, not just one.  Eight crazy days, as Adam Sandler sings in his Chanukah song.
The hope we express in Hatikvah is a reality today.  The Land of Israel – the heart and soul of the Jewish people, without which we would not be who we are today – is a reality.  Let us not forget that we are living a miracle today – the modern day miracle of the State of Israel – reborn after 2,000 years.  As recently as 75 years ago, that miracle, was a distant hope, a vision.

This is an extraordinary gift from the generations that preceded us.  But it is also an awesome responsibility.  I feel the hands of prior generations – long ago and very recent – on our shoulders.   Some famous.  And countless others whose names we’ll never know.  But all of them -- heroes; like the Maccabees.  Many of whom made great sacrifices.

All of them shared a hope, a dream for the establishment of a State of Israel.  They had vision and passion to turn their dream into reality.

Theodore Herzl – over a 100 years ago.  Jewish National Fund, at about the same time.  David Ben Gurion and his vision for the Negev in 1948.  The brave Israeli soldiers fighting to take Ammunition Hill, sacrificing their lives to protect their nearby families.  The current residents of the Gaza Envelope, several of whom came to Boston earlier this year, who can hear the voices of terrorists building tunnels underneath their homes – wondering where and when they will emerge and attack.  And rushing to shelters with their children – with only seconds to protect themselves from the hundreds  of rockets and burning balloons and kites that are devastating their communities.

We all know where we are now.  Israel – the Start Up Nation providing technology, medical advances and humanitarian aid to the world.  An economic force.  The only democracy in the region.  A strong military power.  Where arts, entertainment and culture are flourishing.

All of this with the help of the Jewish National Fund, and our visionary $1 billion campaign, enhancing the quality of life throughout Israel, including the development of the Negev – Ben Gurion’s vision – and in the North and the Galilee.

What we will do with the gift of living in this miracle?  I fear that many of us now take it for granted.  Will we stand by silently when others continue to challenge Israel’s right to exist?  Will we educate ourselves with the facts and have the courage to respond when the media and our college campuses portray Israel as an aggressor, rather than a sovereign country – and the Jewish people -- defending ourselves from attack and defending our right to peaceful  existence?

Let’s focus our hopes, our dreams with an equally grand vision that creates a new miracle.  Jewish National Fund thinks big – big dreams and a big vision.  You’ve heard this morning a little about how this vision is being implemented and realized.  All of us here today – as part of our Jewish National Fund family -- are part of making this vision a reality.

That’s part of our vision of the new miracle.  It’s a vision and a hope that the people living near Gaza won’t need our Sderot indoor playground.  That they won’t need our help watching for burning kites and balloons that destroy farms and homes.  That they won’t hear terrorists tunneling under their homes waiting for a deadly attack.  Our vision, our hope and the new  miracle for me is a State of Israel whose right to exist is no longer challenged.  That our focus for the Jewish National Fund is development, ecology, jobs, communities, education, recreation, arts and culture for everyone.  Not fire equipment to extinguish fires set by terrorists or rocket secure play spaces for children.

We have never shied away from seemingly impossible challenges.  Israeli entrepreneurs never say something can’t be done.  They just do it.  With intelligence, energy and courage.  And the world benefits from the technology they develop.  In a desert country, we now export water to our neighbors.  We grow crops sold throughout the world.  The desert is blooming.  We just do it.

Join me in our hope, our vision, for a new miracle in this generation.  When you’re home with your family spinning the dreidel, look at the letters.  They stand for the Hebrew phrase – “Nes Gadol Hayah Sham” – “a great miracle happened there”.  We are living that miracle now.  But we now have the responsibility to create a new miracle.  Jewish National Fund is part of the hands of the generations urging us to make the new miracle a reality.  Jewish National Fund has the vision and we’ve challenged ourselves to make it a reality.  Join us in that challenge.

Israel is the heart and soul of the Jewish people.  Thank you for being here this morning.  Thank you for your generous donations supporting the Jewish National Fund vision and the land and people of Israel.  This is our strong message to the world that we have undertaken the responsibility that this miracle has given us.  This is how we can be part of the new miracle.