From The Times of Israel

A 12,000-seat outdoor theater is the crown of the new River Park, an ambitious project the mayor hopes will boost the Negev city’s profile.

Last Thursday evening, as Israeli superstar Shlomo Artzi serenaded 12,000 Beersheba residents in the city’s brand-new amphitheater, Mayor Ruvik Danilovich looked on with pride. The event, meant to inaugurate the newest and biggest outdoor performance space in Israel, sealed several years of effort on his part to raise this southern city’s profile from a sleepy desert enclave to a cosmopolitan metropolis worthy of its title as capital of the Negev.

“The new amphitheater, which is the largest amphitheater and the only one of its kind in Israel, is a milestone for Israeli culture,” he said. “It is especially big news to the south. Every major city around the world would be proud to have such an amphitheater.”
Bundled up against the chilly desert night and enthusiastically waving their glowing smartphones in the air, the crowd on Thursday night seemed to agree. They cheered when Artzi, who played a medley of his greatest hits and routinely waded his way into the crowd to kiss his fans and allow them to sing into his microphone, reminded them that Beersheba has always been a favorite stop of his.  “And what an amphitheater!” he exclaimed.

The outdoor arena is the crown jewel in an ambitious broader development project for the Negev’s largest city. Dubbed River Park, it spans 1,700 acres along five miles of the city’s south and includes bike trails, promenades, and an outdoor sports center. Restaurants and galleries are in the works.The park, which when completed will be double the size of Central Park in New York City, is a joint project of the Jewish National Fund, the Israeli government and a number of private corporations. 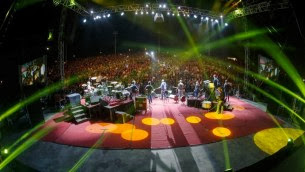 The new amphitheater is the largest in Israel. (photo credit: photo by Udi Ibn Haim)

JNF has touted the park as the centerpiece of its Blueprint Negev campaign, which it hopes will make good on David Ben-Gurion’s dream of greening Israel’s massive desert space and lure businesses and cultural groups away from the country’s center and into its wider periphery. The park is modeled on the San Antonio River Walk and much of its construction involved cleaning and purifying the muddy trickle that was the city’s riverbed, landscaping its banks and installing infrastructure to pump purified water into it year round. 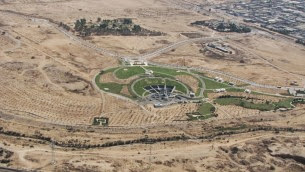 Danilovich, who was re-elected last week, started planning the River Park almost immediately upon entering office and has made it his pet project ever since.“The city of Beersheba is undergoing exceptional development,” he said. “I have no doubt it will become one of the most desirable cities in Israel.”
PLANT TREES IN ISRAEL