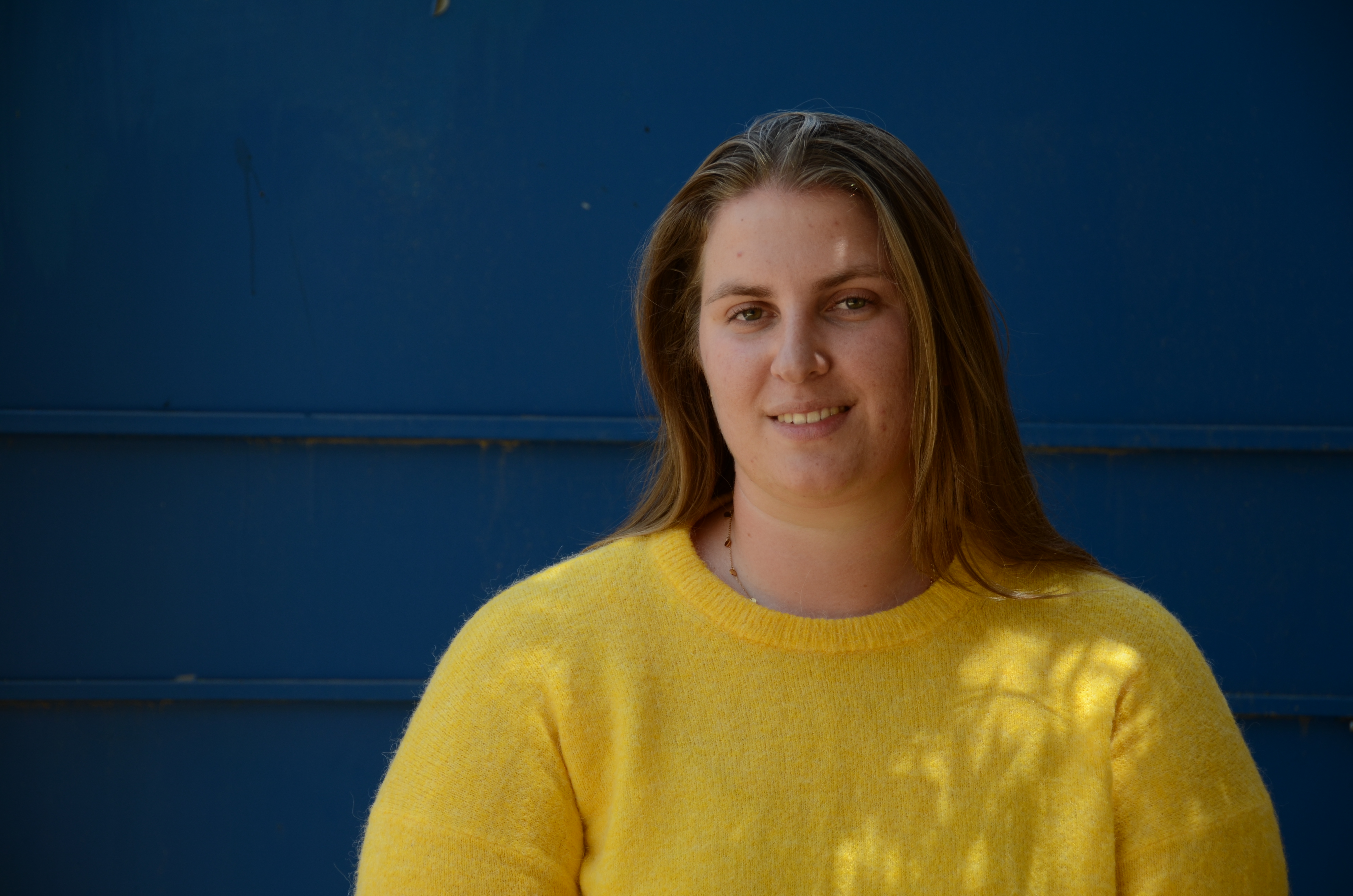 "Hello, my name is Anat and I'm from Israel… or am I from Ukraine? To be honest, I'm not really sure where I'm coming from anymore!" is how I respond to guests who visit our Lauder Employment Center.

My story starts in the Israeli port city of Ashkelon where I was born to Ukrainian parents who made aliyah (immigrate to Israel) after the collapse of the Soviet Union.

I had a great childhood growing up in Israel. However, when I was nine years old my parents decided to move back to Ukraine, to their hometown of Poltava, which is only 80 miles from the Russian border.

I grew up as an Israeli, I spoke fluent Hebrew, I had great friends at school and all my extended family were living in Ashkelon, so it was really hard for me to leave the only place I ever called home and move to a different culture with a different mentality.

I understood a little bit of Ukrainian and a little bit of Russian so when I moved to Ukraine I felt like a fish out of water. I had to learn a new language and to find my way in a totally different country. I was an 'Olah Chadasha' (new immigrant) but in a foreign country rather than in Israel.

I moved to a place where they didn't have 'Milky' (a famous Israeli dairy pudding) or 'Shokolit' (sweetened chocolate flavored powder). There were no shopping malls, barely a supermarket and it felt like I traveled back in time to a country that was living in the early 90's.

Eventually I managed to learn Russian and Ukrainian and when I finished High school, I moved to Vienna to learn biology at a local university.

While I was studying in Vienna, the pandemic erupted so I decided to move back in with my parents in Poltava.

During the first waves of COVID, I felt I had to do something in order to help people around me so I founded 'Humanist', a charity foundation that raised money for disadvantaged children. With the allocated funds we managed to renovate two indoor playgrounds for kids in my town: One in a hospital and one at an orphanage. It's a project that I'm really proud of.

If COVID wasn't enough to struggle with, we had another   calamity upon our way – the conflict with Russia.

When the war started, I was staying at my brother’s apartment in Kyiv and the air raid sirens woke me up. Most of the people in Kyiv had never heard that type of siren in their entire lives but because I grew up in Israel, I understood immediately what was going on.

In Israel when you hear an alarm you run to a shelter or to  a reinforced security room but in Ukraine, at least in the beginning of the war you had nowhere to run. The shelters were last operated during World War II so you can only imagine the dilapidated state that they were in. I found myself standing in my apartment with no were to hide from the ‘booms.’

I knew that I had to get out of the city and reunite with my family. The problem was that my family was separated.

My brother was living in the western part of Ukraine staying at Ivano Frankivsk, a Skiing resort near the Polish border and my parents were in the eastern part of the country in their home town.

My family was divided and I didn't really know where or what I was supposed to do. After I spoke with my parents, we decided that I should drive to Poltava, pick them up and then drive to the western part of Ukraine to reunite with my brother.

I took the only suitcase I had with me and packed my sheets, my computer, a few clothes and my favorite yellow sweater and started driving to my parents' house which was 430 miles away from me.

The drive felt like an eternity in both distance and time. All the roads were packed with people who were trying to flee the country.

There were endless traffic jams and everyone felt that a great catastrophe was coming our way. All along the road there were sirens waling but I never stooped driving for a second.

I was frightened that a bomb might hit my car but there was no sense in stopping because there were no portable shelters or protected spaces along the way. I felt utterly helpless but I didn't have any other option rather than to keep on driving to my parent's house and hope for the best.

When I arrived in Poltava, my parents had second thoughts about evacuating but when they heard the Russian airplanes buzzing around us and the nearby explosions, they realized they have to.

So we began the journey to my brother’s place in the western part of the country to get as far away as possible from the bombings. Other people in our village begged to join us. All of a sudden, we were 11 people in two cars driving 22 hours straight to reach the one-bedroom apartment my brother was staying in.

When we arrived, there were sirens howling and we realized that even the western part of Ukraine wasn’t safe.

What was unthinkable just a few days before was now our only option. We had to leave our country.

We tried three times to leave Ukraine through the polish boarder but every time we tried my brother and father weren’t allowed to leave because the Ukrainian government banned most Ukrainian men ages 18 to 60 from leaving in the anticipation they might be called to battle.

We decided to try a different route and headed to the Moldovan border in the hope we would be able to cross Europe from there.

Because all of my family are Israeli citizens, we expected we would be able to cross the Moldovan boarder but unfortunately my dad wasn't allowed to do so.

In order to get him out of Ukraine we needed to head to the Israeli embassy in Kishinev (Moldova's capital) and get a certificate that he was officially an Israeli citizen.

We were forced to leave my dad behind.

I was petrified I wouldn't see him again and that was the first moment in the entire war that I broke down and just fell to pieces.

I was standing at the boarder crying my eyes out while my dad embraced me. It's a situation I never even imagined I would be placed in. My dad means the world to me so how could I leave him behind? Every one has his own breaking point and that was mine. I couldn’t repress my emotions anymore and just let myself cry. My dad was trying to console me by saying that everything will be all right but at that moment, it was hard for me to believe it. Eventually, we said goodbye and I crossed the boarder to Moldova not knowing when I will see him again.

When we arrived in Kishinev, we were extremely lucky and after a visit to the Israeli embassy we managed to get my dad a certificate and get him out of Ukraine 24 hours after we departed. I still can't believe how fortunate we were.

From Kishinev, as a reunited family we got to Vienna and even though we could have stayed there my mother felt that the only place in the world where we would be safe is Israel

So back to Ashkelon we went.

I started working in Lauder Employment Center of the Negev a few weeks after I arrived back in Israel. My mother heard they were looking for a Project Director and told me I should apply for the job. Back then, I didn't really know what they were looking for but because I was familiar with the Lauder business school in Vienna, I thought that if there's a Lauder center in Be'er Sheva it’s worthwhile to approach them.

A week later, I started working in the center as their new Project Director for Olim to the Negev.

In my position I'm trying to tailor the right 'employment package' for olim (new immigrants) who just came to Israel from Ukraine and Russia. Each person has his own unique employment history so we can't give just one 'employment prescription' to everyone.

We are preparing olim to find employment by offering job interview simulations, helping them write professionals CV's, upgrading their LinkedIn profiles and operate as a one stop shop for all of their job search needs.

The first time I felt that I'm doing a meaningful job was after we arranged at the center an in-person workshop titled: "How to find your way in the Israeli workplace"

It was a three hour workshop that gave the Olim the basic tools and information required for finding their new job in Israel. After the workshop ended two olim approached me and told me that in this workshop they got more information and tools for searching then from all the other organizations they approached in the last four months they were living in Israel so I felt really proud.

So far, we managed to find jobs for 11 olim in different positions among them: An orthopedist that started working at ADI Negev Nahalat Eran Rehabilitation Village, a Pianist that will start working as a piano teacher at the Be'er Sheva Conservatory of Music, and PR specialists that used to worked for IKEA and now will rejoin the company as sale representatives.

If the Lauder Employment Center of the Negev wasn't here for the olim, I don't really know how they would get by and find a job by themselves. I'm really happy I have the ability to help Olim Chadashim (new immigrants) in creating their new lives In Israel.

Click here to read more about our work with Ukrainian refugees.