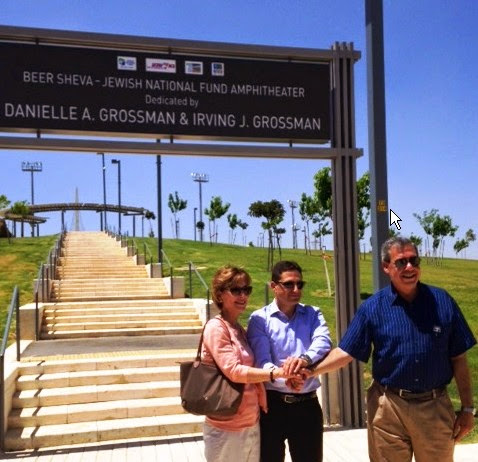 The city of Be'er Sheva, whose population in the greater municipal area is close to half a million, is fast overcoming an image problem. The city had been long regarded by Israelis as a sleepy, run-down development town, a dusty pit stop on the way to Eilat.

That is no longer the case. In the past few years, the city has experienced a makeover that almost defies belief. Museums, theaters, high-rise upscale apartment buildings, high-tech parks, giant malls, and new parks and restaurants have appeared around the city. The former dilapidated town is gradually undergoing an aesthetic gentrification and the city's outer suburbs are nestled on green hills dotted by cool water fountains.

Nothing demonstrates this transformation as dramatically as the Be'er Sheva River Park. As if by magic, the park was created in an area described once as the "armpit" of the city, in what was a dry riverbed near the southern entrance of the city piled with wrecked cars, garbage, and sewage. It took months of cleanup with trucks going in and out to dispose of the rotting trash that had accumulated over decades.


The garbage is now gone, and in its place is a picturesque 8-kilometer-long park with lush green lawns, colorful trees, impressive landscaping, bicycle paths, and a promenade. Besides the expansive green at the park entrance, it's the many species of birds -- egrets, plovers, curlews -- that cheerily announce to visitors that here is an oasis in the Negev Desert.

Central Park, times two
Nearby are archaeological and historical sites. Also planned is an artificial lake with recycled water, a sports center, and a botanical garden. When completed, the park -- a joint project of Jewish National Fund, the Israeli government, and a number of private sponsors will double the size of New York City's Central Park.

The park's "piece de resistance" is the newly inaugurated Irving and Danielle Grossman Amphitheatre, a state-of-the-art 12,000-seat open-air theater -- the newest and largest of its kind in Israel.

Jerome (Jerry) K. Grossman, an attorney and past president of JNF's Delaware board of directors and the Mid-Atlantic planned giving chair, came to know Irving and Danielle Grossman (no relation) in the 1980s when he started providing legal representation to both the couple and their business, Beacon Container Corporation, a box manufacturing company.

As the Grossmans' executor, Jerry and his wife, Susan, attended and spoke at the ceremony. "Irving and Danielle were both strong supporters of the performing arts," he said of the couple. "It would have given them great pleasure to see this magnificent facility."

'Almost surreal'
"They were both very charitable individuals," Jerry said. "In connection with estate planning, Irving and Danielle decided that they wanted to do something in a charitable way with part of their estate. Over the years, the focus of their charitable giving changed. They were always interested in Israel, but not necessarily other Jewish organizations besides their synagogue."At the official naming ceremony on April 28, Mayor Ruvik Danilovich referred to the role of the Jewish National Fund in its support of the Be'er Sheva River Park.

"It sounds almost surreal that an organization based thousands of miles away managed to persuade the Israeli government to get involved in a project," Danilovich remarked. "They saw the opportunity and the vision, and only then did the government get involved."

Although not yet completely built out, the Be'er Sheva River Park has already changed both the look of the area and the real estate market. Along the promenade, new apartment buildings are going up that are the most expensive in the city.

The park is still a work in progress, with much to be done to complete the rehabilitation of the area. As Mayor Danilovich said at the inauguration of the amphitheatre: "Who would have imagined this day, this beautiful park emerging from this neglected dump? People are finally realizing that Be'er Sheva is an attractive metropolis in terms of culture, education, tourism, and jobs. This is really the future."
PLANT TREES IN ISRAEL