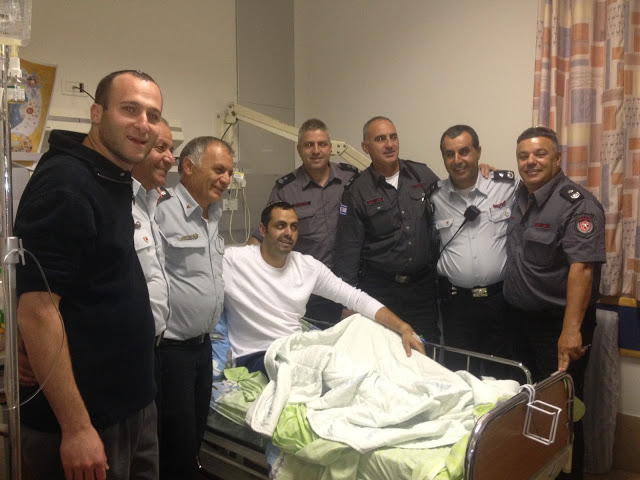 I hope this email finds you well.

We are all filled with very mixed feeling and emotions. So many question marks.....

The last couple of days were anything but normal. I mean that we "got so used to" the crazy situation that we live in, that it felt normal to hear the sirens. How crazy is that? We pretended everything was ok and just had to cope with 4-5 sirens a day.

Yesterday I went down south with a group of American rabbis from all across the USA. Rabbis from NJ, Atlanta, Chicago, LA etc. as we were driving the sirens went off. Immediately we all ran as far away as we could from the minibus and laid on the ground. Our first stop was the IDF staging area. We met with a Brigadier General who is in charge of the lives of 20,000 soldiers and another 20,000 reserve soldiers. He told us about their readiness to go in and "fix" the situation. About the high morale of our brave soldiers and about the fact that the IDF is an army inside a state and not a state inside the army. He conveyed by saying this that we are a democracy, and the army gets its orders from the goverment and only then will it fulfill the mission. It amazed us to see how the army was thanking us, the American community, for our support, for standing with Israel and they asked us to continue to make our voices heard.

We then went to see an iron dome installation near Sderot and while there witnessed 3 rockets fired from Gaza at the city of Ashkelon.

Then we went to the JNF Sderot indoor playground and met with mayor of Sderot David Booskila. The place was packed. Children, mothers, babies and some unusual guests- IDF soldiers who were helping, and some who just came to rest for a couple of hours. We served dinner to more then 300 of them. The most astounding fact was that we learned that in only three years of operation, the JNF Sderot indoor playground has given 184,000 children the opportunity to smile and just be children.

We then drove to the capital of the Negev, Beer Sheva, to the Soroka hospital. As we pulled in, we were greeted by the deputy mayor and right then 2 ambulances pulled in with 5 wounded soldiers. We entered the hospital and went to visit the injured. We visited the 2 soldiers from the jeep attack last week. One of the soldiers had lost his eye sight andt he second one may regain sight in one eye. The most emotional part for me was visiting our fire fighter Shimon Zagury (picture attached), who is thank G-d out of danger, and who can't wait to get back to his unit. I promised him that his JNF family in Israel and the US is here for him if there's anything he needs. Instead of encouraging him- he started to thank us, to tell us to continue. He said that it doesn't matter how far away we may be, we are out there fighting the battles with him and he appreciates it.

As we were leaving Beer Sheva 50 minutes before the cease fire took effect the sirens went off and again we ran off the bus and laid down on the ground. I guess that was the only ground operation Israel took during this battle...

The only good part of this war, is that it brought us all together. It reminded us that even though Israel is almost 65 years old, we still face major challenges. It reminded me that even though I was born in to the fact that Israel was always there, and Jerualem was united before I was born, that there are no guarantees that will always stay the same.

Most improbably it showed that we are a country of 15 million citizens, half which live in Israel and half that live half way around the world.

There is a lesson of freedom for us to all to take from the "pillar of cloud". A message that "am Yisrael" must stay united and strong and remember our past and present in order to secure a strong future for Israel.

Thank you for everything and keep up the good work. I'm afraid this is not the final episode of the battles of the state of Israel.