From Hawaii to Yerucham: Don Wong on why he works to develop Israel's desert 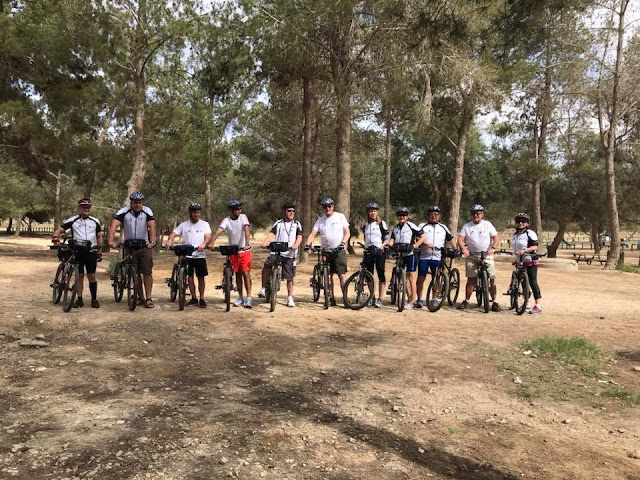 Ride for Yerucham 2018, a four-day mountain biking trip through the desert of southern Israel, took place at one of the top seven spots in the world for mountain biking. Among those cycling through the Negev in March to raise money for the fast-growing little town southeast of Be'er Sheva was Don Wong, a retired management consultant from Kaneohe, Hawaii, and a member of the Jewish National Fund's Yerucham's Task Force since last year.
Don, an evangelical Christian with a background in public health, first visited Israel in 2001 on a Bible teaching tour. He started planting trees through JNF, and felt his connection to Israel strengthen even more after he and his wife Vivien, a retired radiologist, joined the JNF Doctors for Israel Tour in 2014 (Vivien will return to Israel in October to teach radiology residents at the Galilee Medical Center.) We spoke to Don about his passion for Israel and his involvement with JNF and Yerucham. Here are his answers, lightly edited.
What does it mean to you to be a JNF donor?
You learn about many philanthropic projects and meet an amazing group of people. When the 2014 Doctors for Israel Tour took place, the group donated funds via Dr. Robert Norman for the new Halutza Medical Center. When Vivien and I returned for the 2017 Doctors for Israel Tour, the medical clinic was operational. Being a JNF donor brings intrinsic rewards. First, we see the concept, growth, and development of the JNF project. Second, we see what the JNF does for the people and land of Israel. Third, we are gratified to see the past successes of many JNF projects. Finally, we see a nonprofit organization operating with sound business practices. Donating and supporting JNF projects is a wonderful investment with an impactful return on the people and land of Israel.

Geri, Bob, Joel, and Rami had a busy agenda: meeting with the mayor, eating at the new restaurants in the town center, listening to proposals for JNF funding from local organizations, meeting with a local scholar about "economy and sustenance." But just walking around the town, visiting scientists doing research on local birds, talking with the fireman at the old fire station, meeting with a young man who was building a place for troubled youth, and seeing how local organizations can partner with JNF, was an eye-opener and wonderful introduction to the task force.

The task force successfully implemented the first Ride for Yerucham in 2017. With a small group of "flexible" bike riders, Rami, the JNF professional, Yani, the bike tour leader, and Ido, from JNF partner Green Horizons, modified the itinerary to meet riders' abilities. A bicycle-riding company kept us safe and maintained the bikes to function properly. A medic took care of our two physicians in the group who had minor bike injuries. The meals were delicious -- providing lots of food is the standard of a JNF tour and mission.

The rides in the desert were breathtaking and the sunrise hike up Masada was my favorite hike. Outdoor desert cooking was an educational group experience. Youth from Green Horizons made a positive impression on me. All the activities created a special bond and new network of friends. We had so much fun that Vivien and I participated in the Ride for Yerucham 2018. Any JNF tour or mission will touch your heart and influence your love for the people and land of Israel.

How does the JNF help you achieve your task force vision and objectives? JNF provides the platform, means, and legal framework to transfer the funds to the town of Yerucham. Matthew Leebove, assigned as our JNF professional, guides and assists the task force to fulfill its vision and objectives by building a new central park, fire station, and medical center. Matthew coordinates with our Yerucham partners and serves the Yerucham Task Force members as a bridge to communicate with leaders in the JNF. We function as a team and use teamwork skills to move forward on our vision and objectives.

What are your hopes or vision for the Yerucham Task Force?
We hope to raise a lot of money. Our vision is part of Blueprint Negev. We hope more people will join us for desert activities: biking, hiking, wine tasting and experiencing a new adventure that's not on most tourists' radar. And Yerucham Task Force members hope to be at the grand opening of the new central park, fire station, and medical center.

What roles can the task force play in the future of Yerucham?
We can build an opportunity for future generations in Israel. Roles can be creative, new, bold, and big or small. We have lots of team spirit and a strong commitment from task force members. The Yerucham Task Force is a small, efficient unit in a huge army of JNF volunteers.

Chairs Geri Shatz and Bruce Goldberg have built a solid foundation and ground work for task force objectives. One goal for Geri, Bob Weiss, Bruce, Ian Sachs, Andy Rubinstein, Linda Melcer, Stephen Melcer, and me is to prepare the next generation to partner with the people and land of Israel. As the new park will bridge the old and new community of Yerucham, our Yerucham Task Force members will network with donors, the local government of Yerucham, our Yerucham partners, and the JNFuture generation to complete the Blueprint Negev.
What would you say to a potential donor considering making a JNF contribution?
The biggest challenge is deciding which JNF project you want to support! Travel to Israel and see the opportunities that will touch your heart and resonate for you. Do your homework.

If you see value in the Yerucham Task Force vision to build a new central park, fire station, and medical center; want the next generation to have affordable housing in Israel; want to support Blueprint Negev to move people to southern Israel; and agree with the vision of the mayor to double the population of Yerucham, then make a donation to JNF for Yerucham projects. You are supporting the people and land of Israel.