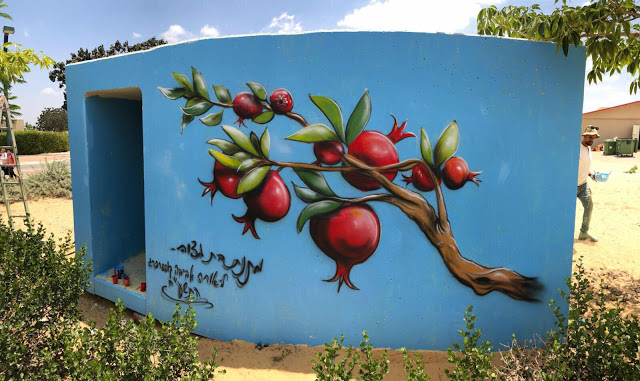 Chaya, 9, used to get off the bus one stop early on her way home to Yated, a moshav in southern Israel.

One day, her mom asked Chaya why she got off at the bus stop farther from home. The stop closer to her house, Chaya replied, houses an ugly gray bomb shelter, and looking at it made her feel bad. The shelter at the previous stop, on the other hand, looks pretty, she said: "It’s painted and gives me a better feeling."

A local artist, along with local kids, painted a mural on the bomb shelter as part of a JNF project to beautify shelters and make them less threatening to kids in the communities along Gaza's border. Since March, more than 450 flaming kites, balloons, and rockets have been launched from Gaza at the Eshkol and Sha'ar Hanegev regions of Israel. The devices have terrorized residents and scorched thousands of acres of agricultural land and forests.

"It makes a big difference for my daughter, who has struggled with the whole situation," Chaya's mom Dina said. "Walking near the painted bomb shelter changes everything for her."

The painted shelters are just one component of a larger JNF push to help residents of the Gaza Envelope. The emergency campaign is also funding new bomb shelters and funding operations for JNF's Sderot indoor playground. And it's purchased speedy fire wagons that can reach deeper into fields and into narrower spots that fire trucks simply can't access.
How you can help communities in the Gaza Envelope
The shelter-painting program teams artists and kids to create something beautiful that might also ease some of their stress. "They develop a plan to paint the shelter," said Yedidya Harush, JNF's liaison to Halutza, a fast-growing community in the southwestern Negev desert. "It's a way to cope and address their PTSD/stress. It's therapeutic."
Sponsoring a shelter costs $5,000.

"Working with the kids for me is very special as I am a resident of the Gaza Envelope myself," said Elyasaf Miaara, one of the artists who has worked with the program. "It gives the kids confidence going and playing near the bomb shelter and the feeling that it’s not a scary thing anymore."
PLANT TREES IN ISRAEL