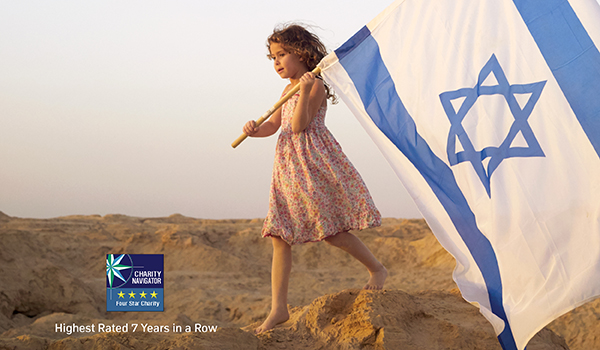 In a country with 1.5 million American charities, Charity Navigator, America’s leading independent charity evaluator, this month bestowed its seventh consecutive 4-star rating on Jewish National Fund (JNF-USA) for the organization’s strong financial health and a perfect score of 100.00 for commitment to accountability and transparency, placing it in the top 5% in the country.
Charity Navigator’s president and CEO Michael Thatcher stated, “This is our highest possible rating and indicates that your organization adheres to sector best practices and executes its mission in a financially efficient way. Only 5% of the charities Charity Navigator rates have received at least seven consecutive 4-star evaluations, indicating that Jewish National Fund outperforms most other charities in America. This exceptional designation from Charity Navigator sets Jewish National Fund-USA apart from its peers and demonstrates to the public its trustworthiness.”

Dr. Sol Lizerbram, Jewish National Fund’s national president remarked, “Once again, we are extremely pleased to be recognized by Charity Navigator as one of the best and most resourceful nonprofits in the nation. Each month JNF-USA’s national board of directors meets to review policies, and program investments as projects are funded by donors who designate where they want their contributions earmarked. Much of the credit goes to the 45 individuals on our national board of directors, national treasurer, Andy Klein, and our professional staff, who account for where every dollar goes. Our donors are highly confident knowing that we manage their contributions, along with their planned giving investments like donor advised funds and gift annuities, in a thoroughly judicious and prudent manner."

Forbes, Business Week, and Kiplinger's Financial Magazine, among others, have profiled and celebrated Charity Navigator’s unique method of applying data-driven analysis to the charitable sector. In addition to Charity Navigator, JNF consistently receives high marks and meets all standards from third-party monitoring agencies such as Charity Watch and the Better Business Bureau.

To donate before 2018 ends, click here.
PLANT TREES IN ISRAEL