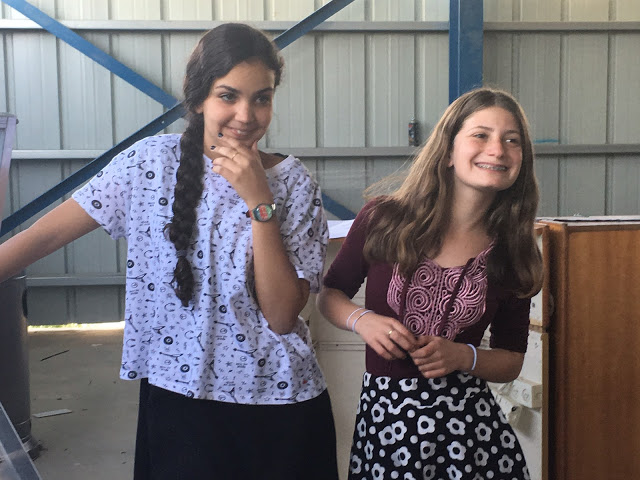 We continue our series on the women of JNF with the story of some amazing girls from the town of Yerucham who might just be tomorrow's robotics stars. Because the #PowerofWomen starts with the #PowerofGirls.

We are standing in a bare-bones studio in a shabby industrial park on the eastern side of Yerucham, a remote city in Israel's Negev desert.

We keep our expectations low. We have each experienced the startled reaction of an Israeli immigration officer when we respond "Yerucham" to the question: Where will you be staying for the week?

This is Yerucham Science Center, home of Yerucham's robotics program. The municipality has developed a program that begins with all children in the kindergartens playing with and then learning from Legos and extends through high school. Ido Frommer, director of the center, introduces us to Hadas and Adelle, two 14-year old students at the Amit Kamah school.

The girls are a little shy. Then they launch into their demonstration and all traces of shyness vanish.

For the past four years, Yerucham's high school and junior high school robotics teams have won first prize in Israel in the First Robotics competition, which is designed to get young people interested in engineering, science, and technology. For the past three years, they have gone on to final positions in the international competitions held in Washington and St. Louis.

This Y Team is all girls. While the high school teams are co-ed and pull from both religious and secular schools, it became clear that for the students in 8th to 10th grades, single-sex teams encouraged better focus on learning engineering skills.

Adelle and Hadas, demonstrating their remarkable robot that collects small items, climbs a metal-framework mountain, deposits the items in buckets along the route, and foists off attempts by competing robots to delay it, are strong, smart, confident, and determined. At the same time, they are giggling and good-natured as the robot briefly balks on its route.

The Y Team won the Israeli Inspiration Prize last month. Not only does the First Robotics competition include building a robot, it also requires a social-action entry. Not only did the Amit Kamah girls build a first-place robot, they also shared their knowledge with a community of Bedouin girls on the outskirts of Yerucham. Through the work of Y Teams, Rakhma has also begun competing in the First Robotics program.

The girls competed in the St. Louis championships at the end of April and placed 40 out of 120 international teams. Not bad for a team of newbies!

Before reading any farther, watch the below video entitled Shalev. Go ahead, I'll wait.

The Yerucham high school robotics teams, kids 14 to 18 years old, built Shalev's car. They donated their ingenuity and time to custom-fit what are to many kids simply toys, but are much more to boys and girls who have never known the freedom of mobility.

Shalev has cerebral palsy. His motor skills allow him to move only a few of his fingers so the team built an engine interface that requires the merest touch from the 5-year-old to propel himself where he wants to go.

The cars, which are valued at over $1,000, are then given free of charge to children who need them. Families with children in need contact the only slightly older children in Yerucham who custom-create the cars to each user's requirements. More than a dozen have been built.

This is the robotics team that consistently wins first place in First Robotics competition. These are the students who will be the leaders of the near future.

The future of Israel is being designed in the Negev by engineering students from religious and secular backgrounds, both girls and boys, from a town that has planned its own emergence from obscurity. New waves of people are seeking the homes that are being built to double Yerucham's population and the future leadership of Yerucham may arise from the very students we met.

This is Yerucham, we tell the immigration officer. This is Israel.

Geri Shatz is a chair of JNF's Yerucham Task Force.