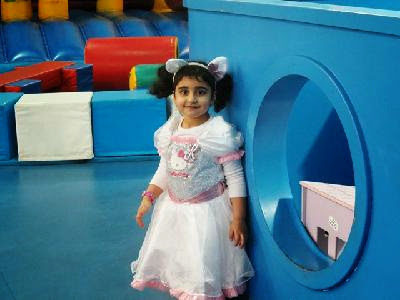 Despite the sudden resumption of Qassam rocket fire from Gaza late last week, school children in southern Israel turned out en masse in festive costumes for Purim holiday celebrations this past weekend, especially at the Sderot Indoor Recreation Center, where Purim holiday music blasted from the loudspeakers, adding to a fun atmosphere that helped alleviate the stress of recent days.

"Purim has helped us forget the sirens we have been hearing in recent days,” said a resident. “I can only hope it stays that way." In Sderot -- a town located less than a mile from Gaza and well-known for being targeted by Gaza rocket launchers -- residents were given the go-ahead from the Home Front to hold their Purim festival in town and outdoors.

Until the last-minute decision by defense authorities, Sderot’s children at least had a unique alternative to staging the Purim parade outdoors: hold festivities in their one-of-a-kind, heavily fortified indoor children's playground.


In the days leading up to Purim, more than 60 rockets fired from the Gaza Strip rained down across southern Israel, sending thousands of residents scrambling into bomb shelters. It was the most intense barrage since a cease-fire in 2012 ended eight days of cross-border violence.

Initiated and funded by Jewish National Fund (JNF), the Sderot Indoor Recreation Center was constructed in the shell of an abandoned textile factory warehouse and retrofitted with 300 tons of steel. The $5 million, 21,000-square-foot facility includes a mini-soccer field, basketball court, movie theater, video games, table tennis, rock climbing wall, computer center, jungle gym and snack area. Visited daily by hundreds of children of all ages, it can accommodate up to 500 at a time, and at night hosts disco parties.


The site opens at 2 p.m. on regular school days and during holiday breaks it’s open all day. During times of crises entry fees are waived but on “normal” days visitors are charged a small cost. “We decided on this symbolic fee to show our seriousness for the place. It makes one appreciate it more, not getting something for nothing,” explained Lisa Turgeman, head of marketing for the Center.

Dressed in a Purim costume of black wig and sparkly dress, Turgeman, a mother of five, described the 2006 attack when her apartment suffered a direct hit by a Qassam rocket. “We didn’t have a safe room, the house was destroyed, I was wounded and carried my baby down the stairs,” she related.

She spent a long time in rehabilitation and today remains partially disabled. Turgeman came to the center originally as a volunteer, as part of her own rehabilitation process following a rocket attack. “I felt truly safe here and confident, it was a protected area and it was fun.”While Sderot’s houses, schools, public buildings and brand-new train station today are all fortified, until the center was built there was no safe place for children to play. It was Jewish National Fund, in partnership with the Sderot municipality, that devised the idea of a protected play area. Completed in record time in 2009, the only structure of its type in the world allows the children of Sderot a truly safe area to play out of harm’s way.

Although not every part of the roof is protected against rockets, the bright blue, cheerfully decorated building has many reinforced play areas that can easily be reached within the recommended 15 seconds to get to shelter once a “Code Red” rocket alert siren is broadcast.

The location is a welcome addition in a tense area, especially in tough times. Sderot, a city of 25,000, has serious financial problems along with a large deficit. A recent study found that one-third of the city's residents suffer from severe anxiety, and 50% of the children have been diagnosed with at least one symptom of Post-Traumatic Stress Disorder (PTSD).
Fortunately, the future looks brighter. Despite rocket attacks that have profoundly disrupted daily life and Sderot’s troubled budget, the town is growing and is currently undergoing a government-initiated recovery plan.
When the recreation center was inaugurated in 2009, there were shuttle buses from the town center to the site, located across a highway in an industrial area. Currently there is no organized transportation; people get to the indoor playground via public transportation or private cars. But once there, if and when missiles fall, they know they are safe.
Said Turgeman: “The fact that JNF would take up the challenge to build this place, which is really the only place of its kind in the world, is something really special for our residents.”
PLANT TREES IN ISRAEL