The magic that is life in the Arava desert: One family's story 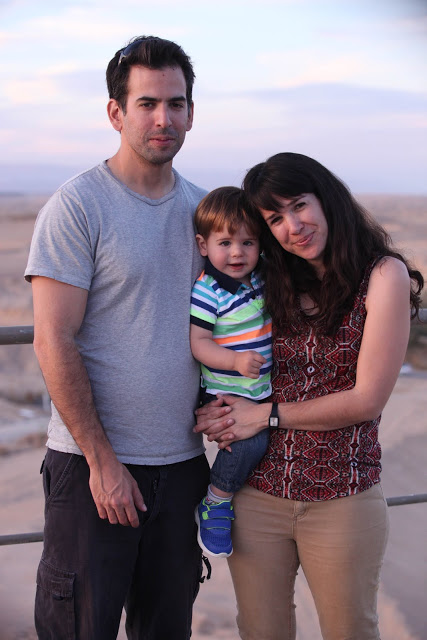 Tania with her husband and son.

Residents of the Central Arava face many challenges, including the harsh desert climate, the large distance between communities, and the lack of accessibility to resources available in urban centers. JNF has partnered with the Central Arava Regional Council as part of our Blueprint Negev campaign to make the Negev habitable to the next generation of Israel's residents.

Here, a personal story from Tania Pons-Allon, who works for the Central Arava Regional Council. The council's jurisdiction covers more than 370,000 acres -- approximately 6 percent of Israel’s total land mass -- but is inhabited by just 3,300 people scattered throughout seven communities.

It was summer, and we packed our small Tel Aviv apartment into a moving van and drove south. I was caressing a nine-month-pregnant belly as my husband drove fast in atypical speed for route No. 6, while sirens went off on the radio every couple of songs. The decision was clear to us both. After 10 years in the center of Israel, we were returning home. We are both Arava natives, and we always knew we wanted our children to grow up like we did: with a sense of freedom, tranquility, and simplicity.
We arrived home on a hot July night, and the heat struck us like a full power radiator that even the desert nights couldn't cool down. Pregnant and sweaty, I stayed indoors with two air conditioners on full blast until our son Guy came into the world in the beginning of August with the help of a labor induction and a vacuum delivery.

We didn't name him Zuk, or Eitan, popular name choices at Soroka Hospital these days. We gave him a simple name that we both liked, without knowing his name would be his first connection to the nature surrounding him.

A few more weeks passed until the heat was bearable, and I found myself strolling with Guy along the moshav, mostly alone, while my husband was elbow-deep in our first year as Arava farmers. In the loneliness of the beginning of motherhood, I started to feel that maybe we'd chosen wrong, maybe we'd gone mad wanting to live in the Arava. Life in the big city was already a part of me, and I found it hard to adjust to the fact that there was no cafe right down the street or pharmacy nearby, or even a bench on a street to sit on and watch time passing by.

And then came winter. The winter in the Arava is a magical thing, and it has a power that can't be explained. Suddenly my eyes opened. I wasn't walking with my head down anymore, and I started to feel what's around me. Skies with thousands of shades of blue and gray, and clouds that bring magnificent sunsets; desert flowers that bloom in yellow, purple and pink; and flash floods that wipe everything down and leave a trail of green sprouts that last for weeks. The desert comes alive in the winter and you can't remain indifferent to it.


Guy started growing and becoming aware of what's around him, from the first rain that dripped on his forehead, to the first peppers that ripened on the fields, to the full moon in the sky and the calls and songs of the different birds on the moshav.

Life in the Arava started to form, despite many challenges for a new family. Even though there is no hospital nearby, there is the newly equipped JNF-Arava Medical Center and a medical team that knows me personally. And even though the kindergarten closes at 1:30, and there is only one school, family time and educational values that are rooted into each barefooted child are not something they will learn sitting in a classroom.

A night out in the desert

There aren't many people here, but those who are here chose to live at the edge of the world. They are good and unique and will always welcome anyone and be there to help when needed. Instead of going out to dinner and a movie, we literally "go out" to the desert for a bonfire and a cold beer. The people of the Arava are extraordinarily persistent, and each one finds their place to do what they really want, be it agriculture, tourism, or art. And with a little help from our JNF friends in every aspect of our lives, the Arava is a blossoming desert.

In my short trips to Tel Aviv every once in a while, I feel less and less comfortable. The silence of the desert makes room for the noisy tumult of the city that I just can't contain for long.

The simplicity of life leaves plenty of room to get to know the people around you -- and yourself. Even though staying at home alone with a baby for so long was challenging, I learned to get to know myself as a mother, and I grew as a human being with every smile and step that Guy took, making me a witness to all those little things that are making Guy the special man he will grow to be.

And Guy? Guy is learning new things about the Arava with every day that passes. He is curious and mischievous. He likes smelling flowers on our walks to the nature reserves around the moshav, and he recognizes the calls of the Arabian Babblers nesting in the area. And if his first words were clouds, peppers, and tree, we must have done something right.