The poetry of Israel: A JNF housing mission, recounted in rhyme 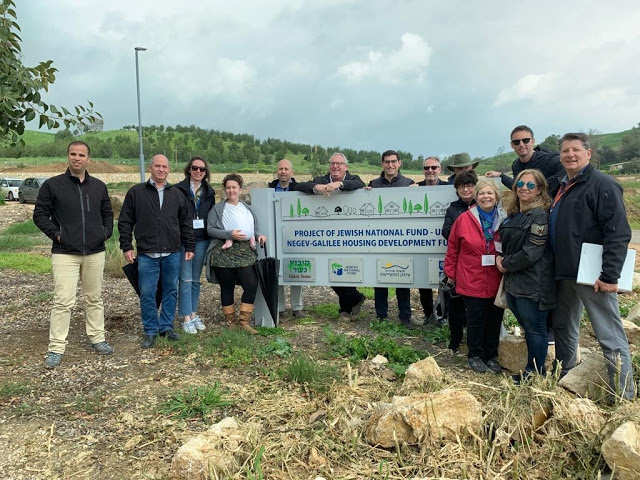 We loaded up the van with our luggage,
And our leaders discussed the day's plan.
Traveling south from Ashdod to Sderot,
The housing mission began.
We hit the road bright and early,
It was a 30-minute ride --
Zest and excitement filled the air,
Our hearts filled with pride.
There were eight of us volunteering
From different states, all with bravado.
From New York, Illinois, and Pennsylvania,
To Arkansas and Colorado.

Our leader was Jeff Schwartz,
But Jason Zenner talked the most.
Natalie Goldman took a lot of pics,
And about her daughter, she would boast.
Everything was new to me,
Michelle Bernstein too was a fresh face.
Joel and Irene Spalter were the veterans
Their knowledge covered every place.
It was also Lisa Krosnick's first trip,
Going along with her husband Rick.
Rick devotes his career to JNF
And to the itinerary he ensured we'd stick.
You're probably asking yourself,
"How does the Housing Fund work?"
Please allow me to explain --
Hopefully it doesn’t sound too berserk.
Our mission is to build housing communities
In the Negev and Galilee.
We provide working capital for them to build
And having their backs we guarantee.
The money is used for the infrastructure,
And then homes are built on the land.
Once all the homes sell,
That gives us the chance to expand.
The communities eventually pay us back,
Which allows us to reinvest in others.
These communities can then grow
That's how we help our sisters and brothers.
Moving 300,000 people to the north
And 500,000 people to the south is our goal.
Building communities along the periphery --
That is our role.
This past February,
We visited some of our sites.
Every day we were inspired,
These areas are reaching new heights.
In Sderot we met with the mayor.
And discussed the thriving city.
Located in the Negev,
It's growing and very pretty.
In a short amount of time,
Sderot has already paid us back.
We're working on a new project now,
They're certainly on the right track.
After our trip to Sderot,
Kissufim was our next stop.
It's about 20 minutes south,
With Gaza as the backdrop.
This place is 99% heaven,
And the final 1% is hell.
That's how it was described to us,
This used to be a hard sell.
Right in the Gaza Envelope,
We have a third of our housing lots.
The most incredible people live here,
Any unrest puts our stomachs in knots.
We then drove through Nahal Oz,
And walked up to the border fence,
Seeing the proximity was eye-opening,
Thankfully things were not tense.
We had lunch in Halutza --
Salad, rice, falafel and meat.
We ate indoors,
And stayed out of the heat.
We spent the night in Nof Zuqim,
Near Jordan to the West.
We saw the building of 50 new lots,
This area for me was the best.
Some communities can absorb five families,
While others can handle 50.
We have to be smart with our money,
We have to be thrifty.
We visited Hatzeva,
And got a tour from the head of security.
His name's Nadav and he protects all,
This area no longer in obscurity.
We then went from south to north --
Driving the entire day.
We were officially a family by now,
And everyone wanted to stay.
First stop in the north was Kibbutz Gesher,
We met a mother and her child.
Her dream was to live here and have a life,
Hearing her story, everyone smiled.
Initially she was told it would take 13 years
For her to build her dream home.
It took Jewish National Fund 18 months --
In a day, WE could've built Rome.
One of our last days up north,
We experienced rain.
That didn’t stop us one bit,
We still had a lot to gain.
Misgav Am and Shluchot,
Two communities in expansion mode.
Hamadia and Neve Eitan,
Demand is set to explode.
That was the last of the sites we saw,
Our trip was coming to an end.
We saw our impact up close,
JNF is Israel's best friend.
Although the mission was over,
There is still a lot more work to be done.
And like the true Israeli spirit,
We won’t quit until we've won.
We have boots on the ground in Israel,
Finding more us more sites.
There's a long way to go,
And we’re working mornings and nights.
With over 1,200 sites already built,
We've broken some incredible ground.
Housing was a major problem in Israel,
And a solution we’ve found!
Author Scott Nadler was recently featured in our latest B'Yachad issue for JNFuture. He wrote about hsi experience as a member of Jewish National Fund's Housing Development Task Force.
PLANT TREES IN ISRAEL