A new JNF tour of Israel from a Torah perspective 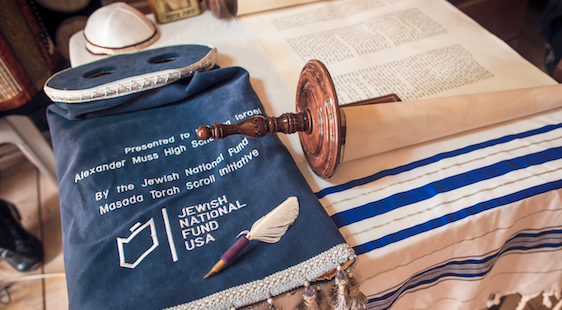 For almost 40 years. We are the immediate past co-presidents of the Orange County Region of JNF -- Jeff, in fact, was founding president of the region many years ago and is a third-generation JNF volunteer. As a former firefighter, Jeff is a member of the Fire Fighters and Rescue Task Force. I'm a member of the Disabilities Task Force.
We've been on countless tours and missions to Israel, and lots of trips on our own to visit our kids and grandkids. But on all those tours and missions, there was something missing.  I consider myself a religious Zionist, and my Zionism, and hence support for Jewish National Fund, springs from my Judaism. JNF does wonderful, fantastic things in Israel, and affects every single Israeli, every single day, including the Torah community. But we weren't seeing this aspect being highlighted on our various trips.

So I decided to create a tour that would look at JNF's work in Israel from a Torah perspective, both in terms of how our various projects tie into the Torah and Biblical history, and how they affect the Torah community in Israel. Thus was born the latest JNF tour, titled Israel: From a Torah Perspective. It will take place from March 4-11, 2019.
When Jeff’s mother passed away, the family built the Wind Chime Park on the slopes on Mount Gilboa in her memory.  Most people who visit just see a lovely, popular park where Israelis can go to picnic, hike, or ride mountain bikes on the many trails.

This is the place, however, where King Saul and his son Jonathan fell to the Philistines, paving the way for David to become king of Israel. That is a significant piece of our history, and people rarely point it out. And in Israel, almost every place is significant. So much history happened in this tiny country that it's difficult to find a place where nothing that matters happened.
In fact, the hard part of putting this tour together was narrowing down the number of sites to visit. We could have spent a month, easily, visiting different places every day, but that would be a very hard sell. So we limited it to eight days, and will have plenty of sites left to visit on subsequent trips. We hope to make this an annual event.
This year, among the sites to be visited on the tour are Abraham's Well, in Be'er Sheva, the Boys' Promenade in Gush Etzion, which was built in memory of the three boys whose kidnapping and murder led to Operation Protective Edge, and the community of Halutza, which was founded by families who left Gaza in 2005. Shabbat in Jerusalem will be a highlight, and participants will have the opportunity to plant trees in Israel with their own hands.
Israel is where our hearts and souls are (not to mention our grandkids!) and we want to share it with as many others as possible. We hope to have around 40 participants on this first trip, a comfortable number for a single bus. If demand is higher, that number could increase. We are encouraging people to register as soon as possible in order to better plan for accommodations.
See you in Israel!
PLANT TREES IN ISRAEL