A second trip and a new view: Seeing Israel through a JNF lens 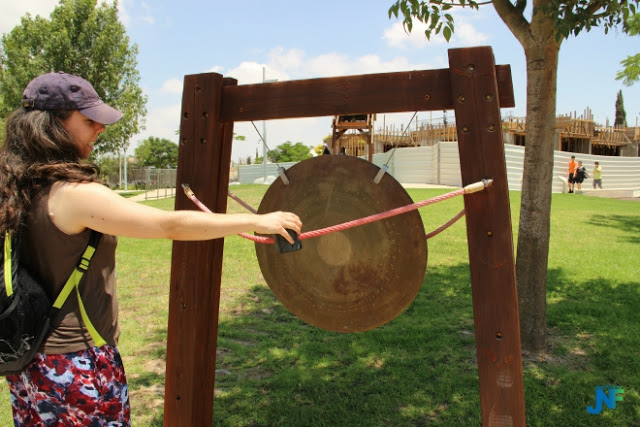 I was a sophomore in college when I visited Israel for the first time on a Birthright trip. As I’m sure most Birthright alumni will tell you, the trip was a wonderful experience. It’s surreal to finally see places you’ve heard about your entire life -- Masada, Yad Vashem, Ben Yehuda Street.

I remember the excitement I felt as we approached the Western Wall. There was plenty of nervous giggling as our group walked toward it holding hands with our eyes closed. Once we reached a ledge in front of the Wall, our group leader told us to open our eyes. Then, silence. There it was. The Wall we pray toward. The Wall I have a painting of in my living room. The Wall I made out of sugar cubes for an art project at Jewish day school. In that short 10-day trip, I immensely deepened the connection I felt to a place thousands of miles away.

Five years later, I returned to Israel for a second trip, this time on a Jewish National Fund mission for digital-media professionals who traveled there to learn more about JNF projects and hopefully bring greater awareness to them. I experienced the same sense of belonging I did on my first visit, but the itinerary was completely different. Birthright -- which seeks to strengthen young people’s Jewish identity and solidarity with Israel -- is like I-80, the quickest, most-traveled route across the U.S. The digital-media mission is Route 50, the road less traveled but full of must-see sights, with less congestion and more inside, on-the-ground views into the daily lives of Israelis.
If I had to describe the trip in two words, they would be passionate and caring. Of course, every JNF project is valuable in its own way, but the following are some of the places that stood out to me that are not your average tourist destinations.
Aleh Negev is a rehabilitation facility for children and adults with disabilities in Israel’s southern region. The community houses 140 residents and employs many people in the area, and also provides rehab services to community members. It’s clear that everything from the state-of-the-art therapy pool to the petting zoo to the gorgeous sensory garden filled with soothing chimes; calming water sculptures; and soft, fragrant plants has been thought out with the utmost detail.
The playground features a two-person merry-go-round and swing for people in wheelchairs. It’s inspiring see the emphasis on quality of life for everyone no matter who they are or what their condition. And the dedication of those who work at Aleh Negev is incredible.

We met Hadar, an IDF soldier who leaves her nearby base twice a week to volunteer at the facility. She told us she was nervous to work with the children at first because severe disabilities are not something she was used to seeing, but now loves being able to see the difference she’s making.
Shahar Hermelin, JNF's director of tourism in Israel, summed up the level of individual attention perfectly: “If the community has 140 different residents, the community is running 140 separate programs.”
Halutza used to be nothing but sand dunes. In Hebrew, halutz means “pioneer,” and that’s exactly the spirit this community is rooted in. The first of three Halutza communities was founded in 2005 by Jewish settlers who evacuated their homes during Israel's disengagement from Gaza. Now the area in the northwest Negev is home to schools, synagogues (one permanent structure, two temporary buildings), playgrounds, organic crops like tomatoes and cucumbers, life.
We heard stories from people who live and work in these communities. It’s definitely not the easiest place to live, and sometimes the situation can be tense -- each community has a security unit in addition to the IDF soldiers who patrol the area. Despite this, you get the sense that everyone who lives there does so with intention. They’re choosing to speak with their physical presence, and that passion drives the entire community.

Nefesh B’Nefesh is an organization that helps people before, during, and after the process of moving to Israel, or making "aliyah." People arrive in Israel throughout the year, but twice a year Nefesh B’Nefesh coordinates a charter flight of more than 200 people who leave as North Americans and arrive as Israelis.
It was incredible to see the pure joy and raw emotion of people stepping off the plane, as well as the excitement of the family, friends, soldiers, and supportive strangers who woke up early to welcome them at the airport with songs, flags, and signs. It’s amazing that Israel is a place people from all around the world feel is their home.
LOTEM aims to make nature accessible to people with special needs. At its nature preserve in the beautiful northern part of the country, LOTEM offers a paved, accessible hiking trail, a sensory garden, a wheelchair-accessible wine press, an olive press, a beautiful new visitors’ center and more. The picnic tables have breaks in the benches to allow space for people in wheelchairs. It’s these small details that show people they matter, and it makes you wonder why we don’t see more of these inclusive designs everywhere.
Special in Uniform integrates people with disabilities into the Israel Defense Forces. The program believes that “everyone has a right to fulfill their potential and be accepted into society, regardless of any disability,” and it means so much to the soldiers to serve in the army, and to their families too. We had the opportunity to meet with a group of these soldiers. One by one they stood up and told us a bit about their role on the base, all with huge smiles across their faces.
After they introduced themselves, our group pinned a Special in Uniform JNF pin onto the lapels of their uniforms. In return, the soldiers presented each of us with a black Special in Uniform hat. These gestures may have been small, but the meaning was huge for everyone. There wasn’t a dry eye in the room.
Ayalon Institute and bullet factory on Kibbutz Hill just outside Tel Aviv was home to a secret, underground factory from 1945-1948. During that time, more than 4 million bullets were produced to help the fight for independence. Forty-five people worked long hours in a space the size of a tennis court. The other 50 people on the kibbutz had no idea what was happening below.

We had the privilege of meeting Shlomo Hillel, a 92-year-old former Knesset speaker who worked in the factory, and hearing the dramatic story from his perspective. When I asked Shlomo if it was hard to keep the secret from his family and other kibbutz members, he said no. He and the other scouts involved were incredibly proud of their efforts and their ability to outsmart the British at every turn, he said. (I wish every historical site and museum had a someone on hand who experienced the event!)
“Israel’s most valuable resource is the people,” LOTEM Director Alisa Bodner told us during our tour of the organization’s farm in Emek HaShalom, the Valley of Peace. Each place we visited proved this point again and again. The importance of passion and kindness are two characteristics I would love to see continue to grow in Israel and spread across the world.