Back in Israel with JNF four years later, and awed by the progress 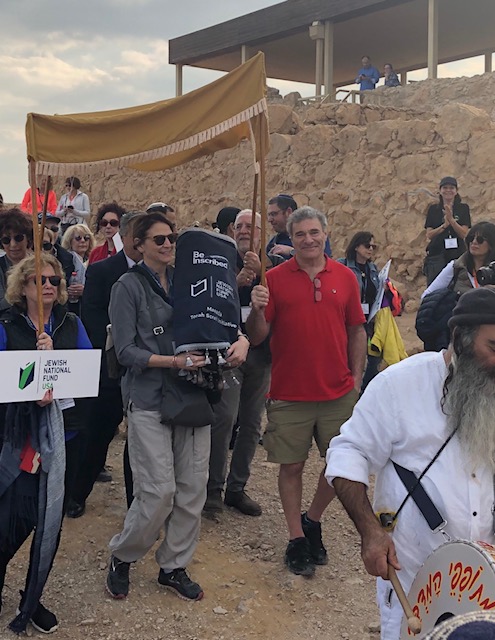 The author holds a newly inscribed Torah on its way to a new home at Kibbutz Shalom.

The words of my dear friend Vivian Grossman, "I always yearn to be back in Israel," could not be more true for me.

As I begin to put words on paper, thoughts fight for clarity amid the jumble of emotions that come with living as part of the diaspora but knowing the warmth and joy of being "home" in Israel, as I was during the JNF Mega Mission in February.

My connection to the state began when my grandmother collected blue boxes in Savannah, Georgia. It must have seeped into my subconscious because when I was asked to be on the local JNF board in Atlanta in 2007, I said yes.

And when I attended the Queen of Sheba Mission in 2008, going to Israel for only the second time, my life truly changed forever. I will never be at a Friday night Shabbat anywhere in the world without recalling the feeling I had being with Talia Tzour's family, blessed for Shabbat by her grandmother. I will never forget the feelings of love and camaraderie among the women and the people we met.

The more involved I become, the deeper my feelings and commitment grow.  From falling in love with the Be'er Sheva River Project, and permanently placing my beloved parents' names on a plaque there, to my current "affair" with the Arava, and my growing attraction to the Gaza Envelope, it just gets better and better.

I started my JNF sojourn while living in Atlanta, but moved to Amsterdam over four years ago. I co-led the first JNF mission during Operation Protective Edge in 2014, just before I left the states. While I never stopped donating or  keeping an eye on my JNF projects, I found another Jewish organization here to fill my time. But it wasn't the same.

When the Mega Mission was advertised, I was ecstatic I could attend. I was able to see many of the projects I had touched and that had touched me. The last time I had been to the Arava with JNF, we were just dedicating the medical center. This time, the Search and Rescue Center was nearing completion, the swimming pool sports complex was being built, the schools were full and the AICAT campus was huge … with an incredible new building already open!

The changes that have occurred in the short time that I was one of only four women sitting in a van in a Central Arava driveway with Russell Robinson, dreaming large, are mind boggling.

And there were so many stories from this trip. Halutza, for example. The first time I saw Halutza I was with Makor. We pulled carrots out of the dirt … and there was not much else there. The next time I was in a bomb shelter holding a baby and singing Am Yisrael Chai. But this time I was eating fabulous food in a huge dining hall with 150 other JNFers … what a time warp!

But I can't forget Masada. It was nothing short of spiritual to hold a newly inscribed Torah as it was being carried down Masada to reach its ultimate destination of Keren Shalom, the kibbutz closest to the border, from which Gilad Shalit was kidnapped. That feeling stayed with me all the way until the Torah was delivered to its new home, with so much joy and celebration.

With so much going on in the world, with the constant assault on our senses from the media and so much hatred toward us as Jews and our state as the only Jewish state in the world, it is easy to get discouraged.

But when I step off of a plane onto Israeli soil, I always feel like I have come home.

And to be part of an organization, like JNF, to be welcomed back after four years as if I had never left, to see so many friends from around the US and Israel, all still working and celebrating the incredible country we love so much... That is the family that validates that when I stepped off that plane in February to join the Mega Mission, I had truly come home.
PLANT TREES IN ISRAEL