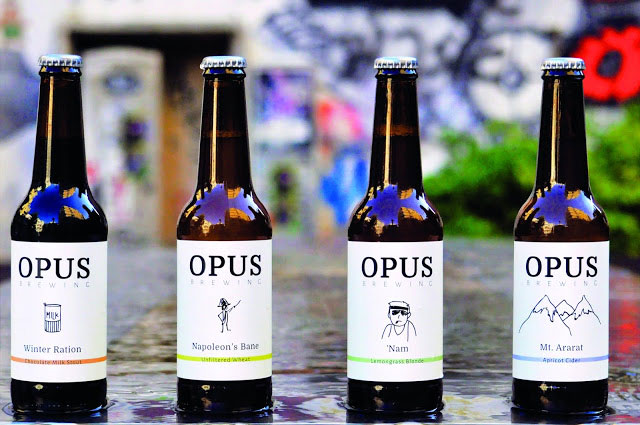 What made you decide to make aliyah?
I studied abroad in Israel my freshman year, just as the second Lebanon War broke out. The experience reminded me that the world can be a dangerous place for the Jewish people. I made aliyah in August 2010 and that October I entered the IDF's 101st Airborne Brigade.

How did you get started in the beer brewing business?
I loved sitting with friends at bars but didn't love needing to pay for the simple privilege of enjoying a beer with friends. I decided to make my own beer and began whipping up my first batch of amber ale. Truth -- it was terrible. After four years of amateur brewing, I got a job working as a brewer's apprentice at the Dancing Camel in Tel Aviv and began teaching brewing workshops. Nefesh B’Nefesh invited me to conduct my first workshop at their Tel Aviv Hub, and in January 2018, Opus Brewing was born.

Why did you name it "Opus Brewing?"
The meaning of the word opus in Latin is “work.” We put in the work, constantly strive for a more perfect beer, and at the end of the day, sit back with a cold beer and enjoy. This is the feeling I wanted to capture for Opus Brewing.

Why go into beer production when Israel is so well known for its wine?
Beer and the Jewish people share a rich and ancient history. A recent discovery revealed that the world's oldest known brewery was in the Carmel mountains. Rav Chisda and Rav Papa were Torah scholars as well as brewers in the Babylonian exile. James Armand de Rothschild and Gaston Dreyfus established the first commercial brewery in 1934 in Rishon LeZion. When I brew, I feel connected to that history.

Are your ingredients local to the land?
Every Sunday, I ride my bike down to the shuk and choose a new, interesting ingredient to incorporate in my weekly brew. I build a new recipe around that ingredient, and customers have really taken to this brewing style. Some of my recent creations have been Lemongrass Blonde, Strawberry-Lemon Radler, Pomegranate Saison, Chicken & Waffle Porter, Blood Orange IPA, Loquat Wheat, and many more.

Where do you see yourself and your business five years from now?
I hope to establish a state-of-the-art nano-brewery within the year. Once Opus outgrows the nano-brewery, I want to move to the north (my soon-to-be-wife, Roni, grew up on Kibbutz Beit HaEmek in the Galilee) and open a brewery with the capability to distribute to worldwide craft beer markets. In brewing, I feel that I have found my calling. When I look in the mirror, I see a harmonious hodgepodge -- an American, an Israeli, a soldier, and a brewer.

This article originally appeared in the summer 2019 issue of B'Yachad. Click here to read the rest of the issue.
PLANT TREES IN ISRAEL