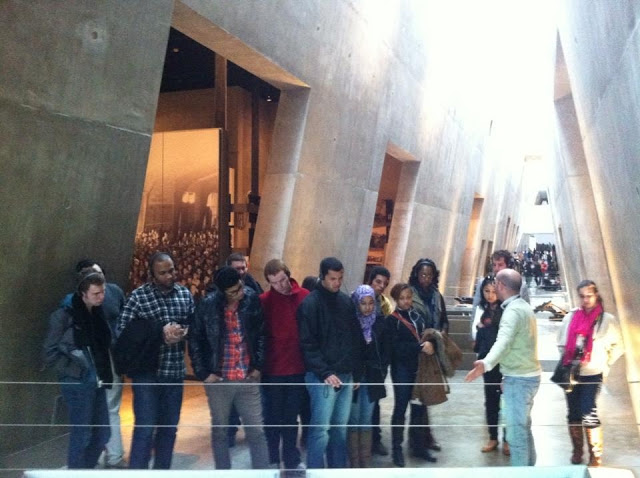 I, as I am sure most of my friends felt waking up this morning, had a feeling of both sadness and anticipation. Sadness because it was our last day in one of the holiest cities in the world, but a sense of anticipation for the next leg in our adventure through Israel.
After having a lovely buffet breakfast at the Prima Kings Hotel, we packed up the bus and headed to the Israeli Ministry of Foreign Affairs. But before we went in, Yoni, our esteemed and well-versed tour guide, talked to us about the importance of the Israeli Supreme Court -- especially within a country that doesn't have a written constitution. What I found extraordinary about the judicial process was that you didn't have to be an Israeli citizen to have your case heard before the Court and that the judges weren't politically appointed .
Once we had passed through security at the Foreign Affairs Ministry, we met with two brilliant women -- one an expert on Syria and Iran; the other the Deputy Spokeswoman for the Ministry. The expert spoke mainly about Iran's nuclear military ambitions -- specifically the status of their enriched Uranium and the threat it poses to Israel's security. The Spokeswoman talked about Israel's perception to the international community; themes like apartheid and boycott that contribute to the propaganda of the international arena that are against the State of Israel.
From there, we went to Yad Vashem, Israel's Holocaust Museum. The most striking thing about it was its triangular shape and the video at the entrance that depicted and animated Jewish life in Europe before this horrific event. Our tour guide was very knowledgeable about the events that took place before, during and after -- even sharing some of his own family's personal experience with the Holocaust to one of our caravan participants. The most impactful part of the museum was the library of books which contained the names of those that lost their lives to this senseless and inhumane tragedy -- including an empty area for names that will never be recovered and remembered. Before we left, we met with an Auschwitz survivor. He told us about how he lost his father, mother, and sister and eventually lost contact with his brother before making his way to the Promised Land. It made me appreciate the resiliency of the Jewish people, and the fact that this man never lost faith in God was mind blowing. As young people living in a modern western world, we can't even begin to imagine something like the Holocaust happening to us. We lose faith in God for the simplest of reasons -- bad breakup, bad grades,  or even just a bad day -- but the fact that this man still held his faith after all that he was subjected to made me reevaluate my relationship with God.
Then we departed south to Be'er Sheva and met with a spokesperson at the Or Movement. We learned about JNF's contributions to creating seed communities in the Negev and Galilee. The young man giving the presentation was very charismatic and passionate about bringing people here to fulfill the Zionist pioneering vision of Ben-Gurion. The simple fact that one can bring green to the desert is something that will always fascinate me, and I am positive that these areas will witness a migration like no other in the coming years.
That night, we checked into a Kibbutz and had a very emotional debriefing about the events of the day and about our own personal perspectives on the Israeli-Palestinian conflict. I pray that one day we can find peace for both parties. However, no radical religious philosophy in the form of a political party that inhibits democratic progress and the protection of basic fundamental human rights should ever be given legitimacy and sovereignty.
PLANT TREES IN ISRAEL