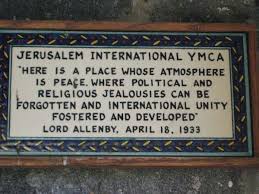 The dictionary defines "the end" as a conclusion, the final part of something. As we spend our last day in Israel, it's seems logical to believe this is the end of our experience in the Holy Land. Even though we will be leaving this place, my fellow travelers and I believe this is actually the beginning of something much bigger than us. We have seen and learned a lot here in a short amount of time, resulting in many walls being broken and some beliefs questioned. Our group is so unique and diverse with interests in politics, history, environmental and international studies, and health. All of us came on this Caravan for Democracy trip for a reason specific to ourselves but were gratefully surprised that the epiphanies/realizations we experienced were not in the ways we expected.

Sitting here in the Negev desert with not only fellow travelers but new friends, I listen to the passion this group has about making a change and showing their campuses that there is a human face to both Israel and Palestine. Our last day we traveled back to the place where it all began, Jerusalem. We visited one of the largest and most elegant YMCAs I have ever seen. The architecture, like most buildings in Israel, was built with such complexity and purpose . There were three buildings, the main tower which can be seen from any direction, was engraved with the six winged angel that brought the good news of Christ. On each side of the tower, above the windows, were scriptures written in Hebrew and English. The rooms within the walls of the YMCA were just as elegant and beautiful as the outside but the mission was much more wonderful. The Jerusalem YMCA is a place where anyone can come and participate in many activities, no matter their race or religion, leaving all hate and prejudices at the door. Considering Jerusalem is the city where every single religion in this area is represented, I was not surprised at this idea but awed.

Following the tour, we were introduced to our first speaker, a representative of the ministry of foreign affairs. She discussed a little about the technological rise of Israel based on entrepreneurship. This was very interesting because earlier this morning we took personality quizzes which showed the producers, administrators, entrepreneurs, and integrators in our group. We had several people labeled as entrepreneurs and having a speaker talk about the products of these type of leaders was inspiring.


Our second and last speaker of the trip was Rabbi Michael Melchior a renowned jewish leader who was formerly part of the Knesset. He discussed some of the conflict among the territories but was sure to mention at the beginning that no one truly knows what this is about. There has always been opposition since the times of the Bible. All we can do is look to the faces of the citizens and try to make it better for them. Something that has been echoed a lot during the trip.

After the rabbi left we sat down for our last debriefing.  It was pretty emotional but beautiful. Definitely amazing to see how close we have all gotten in a short amount of time. Just as amazing was to see the many revelations  people learned about not only this state but also themselves.

We ended the night with our "last supper" in Jerusalem and with each other. There was a a lot of laughter and reminiscing as well as picture taking, "I love you's, and "keep in touch'es. What an amazing group of people and a fantastic trip to be part of. Thank you JNF for doing this and making this a wonderful trip for all of us.
PLANT TREES IN ISRAEL