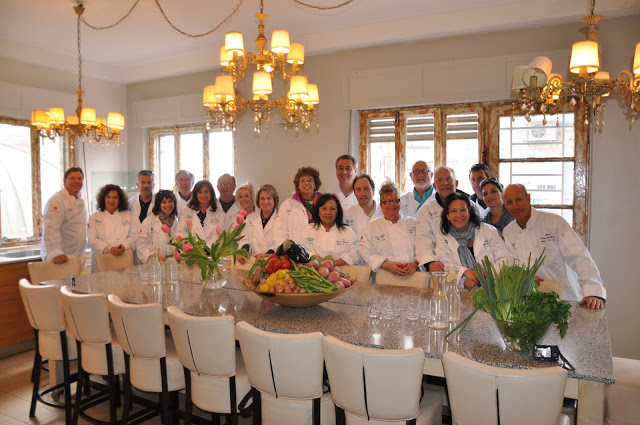 Cooking Class with Chef Tali Friedman
We are half-way through the second JNF Culinary, Wine and Art Mission to Israel and every day exceeds expectations. I've now been to Israel with JNF three times in the last three years, including the inaugural Culinary and Wine Mission, and am continually amazed by all that JNF is doing to make the quality of life in Israel better and better; I am in a constant state of awe. This visit is really special because my wife Gail and sister Ellen are with me.

So far, we have visited a beautiful resort in an idyllic setting in the Galilee. Mitzpe Hayamim is on an organic farm overlooking the hills of Galilee; the food served at the resort is beyond description, and all of it (including meat and poultry) is grown right there. We had lunch at the home of one of Israel's most acclaimed chefs; we picked herbs and vegetables in his garden, also overlooking the Galilee, and, aided by exceptional wines, we helped him prepare a meal that I don't think one could get in any restaurant. And later in the afternoon, we enjoyed fondue in the forest with teenagers from Green Horizons, a JNF sponsored program that gives these young adults the opportunity to learn responsibility and self-reliance through nature. Yes, we're eating a lot, but this is, after all, a Culinary mission!

The next morning, on our way to Jerusalem, we were treated to a private insiders' briefing at JNF's office by Mark Regev, the Prime Minister's right hand and personal advisor. From there, we went to Ammunition Hill, the site of the most strategic battle making possible reunification of Jerusalem in 1967. JNF built and maintains a memorial in memory of the IDF soldiers who lost their lives in that turning point in the war. Gail, Ellen and I were especially privileged this year to dedicate a plaque commemorating  my father's 90th birthday on the Wall of Honors. The wall honors Jewish soldiers who served in any branch of the military anywhere in the world; my father fought in World War II.

We spent yesterday afternoon visiting an incredible outdoor market in Jerusalem, guided by Talli Friedman, a charming and also renowned Israeli chef. We then went up to her studio, which is right in the market, and helped prepare yet another amazing meal; again aided by fine wines from the Golan Heights. We were so satisfied by the meal that none of us had dinner; instead, some of us shopped while others turned in early for a restful night at another first class hotel.

We are now on our way to the Negev. Our first stop will be Aleh Negev, a unique rehabilitation and treatment facility for young people with severe mental and/or physical disabilities. JNF supports Aleh Negev, founded by retired IDF General Doron Almog, who founded it in honor of his son who was born with severe challenges from which he unfortunately passed; he was 23. The facility is so unique that health professionals from all over the world visit to observe and learn from the extraordinary techniques used there. I have been there before with JNF and can't wait to see it again.

This afternoon, we'll be headed for Sderot, near Gaza, where JNF has built a 21,000 square foot indoor playground. Because of the constant rocket attacks in the area, children living there could not go out to play. The JNF playground has given the kids a place to be kids; it also doubled as  a bomb shelter during the recent attacks. From there, we go to Mitzpe Ramon near Be're Sheva later today where we will see a crater that is Israel's version of the Grand Canyon. But I am especially eager to visit the Be're Sheva Water Park, another JNF project in which Gail and I have invested. When completed, this oasis will have all of the facilities of NYC's Central Park, including a world class amphitheater, and be twice the size!

We have already covered so much ground that it feels as if we've been here for a month; and we still have lots to see, and many JNF projects to visit, before heading back to Jerusalem for Shabbat and then to Tel Aviv before leaving for home. For me, the good news is not only the incredible experience our group has enjoyed, and sharing this experience with Gail and Ellen, but that I will be back to Israel again next year. Thanks to JNF, Israel has become a  very special part of my life.